An east coast farmer is under pressure from a building drought locally. But as he looks around the world he finds many other big weather changes, enough to cause huge food supply disruptions

Rural News
An east coast farmer is under pressure from a building drought locally. But as he looks around the world he finds many other big weather changes, enough to cause huge food supply disruptions 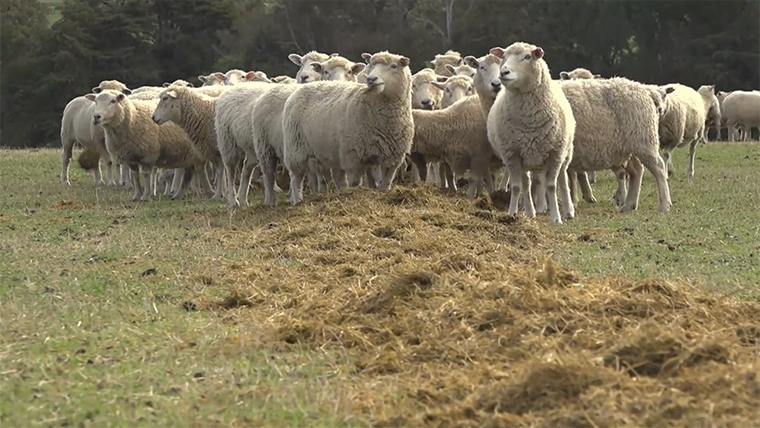 Sometimes thing go awry, sometimes twice but this is our third dry year in a row. It is not as bad as last year as we had rain before Christmas but still very dry.

We had some rain today, perhaps 4 mm, but then it will be back to dry again for two weeks.

I'm ripping up some fields and growing some rye corn and triticale in the hope they will grow well in the cold that’s coming. Those two plants are tolerant of dry and cold I'm hoping; dry weather is normally colder weather.

I’m feeding out to every mob but two.

I booked cattle in two weeks ago to the works but no date has been assigned yet. I booked in 10% of my cattle every week till the end of June as it looks like I'm going to be going backwards till then.

The good news is I have 2 year old cattle on most have done well enough to reach a killable weight. Also replacement calves are cheaper, in fact below what they were worth in October. Sheep prices also look good so those who have works space are getting decent money, even if they are lighter than budget.

The wait to get stock killed could be to do with global backlogs. 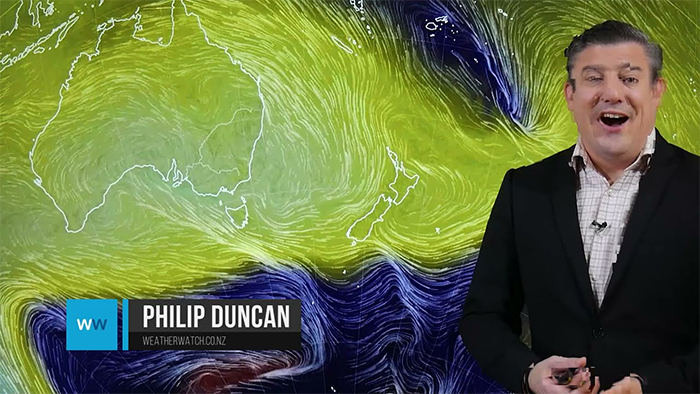 They do seem quite large - we've certainly noticed much more high pressure these past 2.5 years. The lows in the Southern Ocean have also been especially large at times this year. We don't know why - and Niwa hasn't explained why either.  Phil Duncan

Anyway my friends in North Canterbury are entering their 5th dry season in a row, Banks Peninsular is looking at a 1 in 100 year drought, and farmers in the South Island are feeding out while winter is yet to come.

My farming friends tell me that from North Canterbury through the Kaikoura coast to Picton is the driest they have ever seen. They also say it’s all the way down including some of Southland.

I wouldn’t be buying a farm on the East Coast until this weather pattern ends.

This morning's forecast from Weatherwatch is for no rain till the middle of May for the East Coast.

It's a world-wide phenomena

The odd thing is my brother-in-law in Cornwall, England, has also had no rain for a month. He told me his friends in the north of England have had only a few millimeters of rain in the last six weeks.

So I rang a friend in France, he has had no rain for six weeks either. And it's cold.

Look at this vineyard of frost damage in France. I can tell you from experience you don’t get that ice build up unless you get a minus -5 or -6 degree frost that lasts for probably ten hours. It needs very dry air / low dew-point to get the temperature to drop like that. 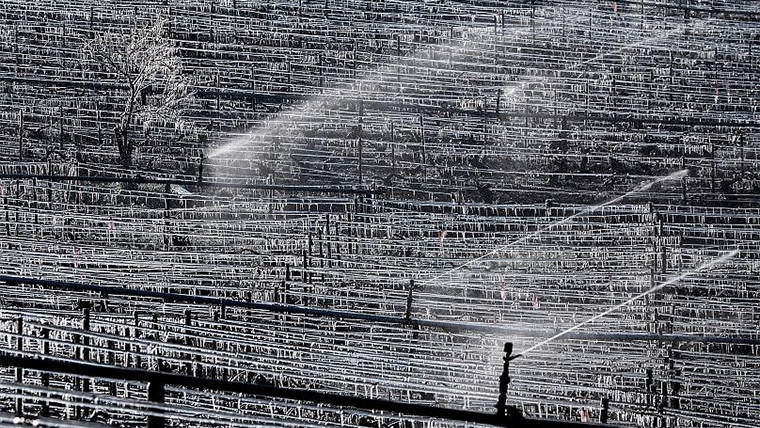 It will be devastating but that ice should have protected the crop well, as long as you put enough water on to keep the outside of the ice wet, so the energy is absorbed into freezing the water on the outside. Inside the ice it will be above freezing. One mm for every degree below zero, -6o needs 6 mm an hour every hour, hopefully their soils can handle that much water.

Farming friends in California say a huge chunk of the USA is in drought. One told me his water bore is below minimum requirement so he won’t be irrigating. Farmers in the West of USA and in Alberta and Saskatchewan are planting grain into dust. 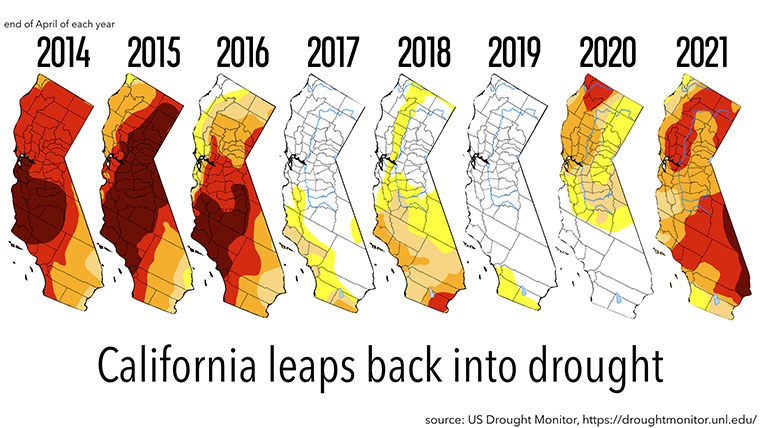 Brazil is dry too.

The other weird event is who’s importing grain, China has sucked up so much food and paid well, its left traditional exporters short locally.

China is not only buying grains, it is buying meat and especially pork in enormous volumes, raising prices five-fold. American pork 42s prices rose from a low week of US$21 in late December to US$114 just fourteen weeks later.

The USDA is reporting sharply rising prices across the board.

Indians are looking at the fast-shifting pressures from China in horror, even as their own water situation is stable and satisfactory. For a second straight year storage levels are above their ten year average.

Andrew Wilson is a reader from the eastern Hawkes Bay. He commented as AndrewJ. He says he has "a lifetime of farming both here and abroad, observant, a failed viticulturist. My Vet tells me I'm atypical."

Our crop of squash was considered "average" by the company we leased our land to over the Summer despite the lack of rain, although the heavy downpour in mid-November put about an acre underwater for 36 hours. We've had maybe 3-4 days of reasonable rain since then. Moata went in 3 weeks ago in readiness for Winter grazing and the paddocks have a definite green tinge to them now.

We often watch the rain follow the ranges to the West and die a little inside, but our position at the foot of some hills means any runoff ends up on our land. Rather have too much water than not enough, at least we can channel it away and store some for the drier months.

Best of luck for the coming season, we're only small and new at this but we're loving the challenge so far.

Eastern bop.
It's been the best Grass growing season I've experienced anywhere I've been.
Production 15% up for the season, 30% up on the first season four years ago. All my farming life I've worked from the base that the autumn determines the following spring, well last summer autumn was probably the least productive I've ever experienced so there goes that certainty. Followed by the best ever June/July/ august, averaging around 50kgsdm growth per day.
The defining weather factor for me wasn't the warmth or cold but the fact we from memory haven't had a single period of rain from the south. Normal cold temperature winter, summer was undoubtedly way cooler than two years ago, but only ever rain from the North.
I would have mentioned our good fortune much more but having been there many times I know how hard dry is to cope with so be assured others out there are thinking of you.

Thanks Andrew J, always enjoy your comments. Although I’m surprised at your comments regarding drought in North Canterbury from your contacts. . It’s amazing how short some memories are regarding the weather. Yes we are very dry in the last 3 months, but prior to that we’ve had an amazing 9 months, plenty of feed, warm conditions for growing stock and grass, plenty of supplement made and pretty good prices really considering COVID. My farm is in the crap right now but continually restocking down to capital stock only, plenty of baleage, but going to be a tough winter. Last 12 months rain about 600 ml, as compared to July 2014 to June 2015 it was 270 mls.

Summerfruit growers (Cherries, apricots, plums, peach, nectarines) struggled this last season to make profit and it wasn't all due to weather. Market returns were a part of it. With more cherries being grown the industry is at the crossroads - either lose the smaller/hobby growers or expand to become a force to be considered. But if it is the latter, then the industry needs to look at the way we market offshore. Word on the street this last season was exporters are competing with each other and driving prices down, in the process. In one such situation an exporter had an agreement with a large buyer (not on the Asian continent), only to later find that another exporter had offered to accept a price around 36% lower. Is it time a Zespri type structure comes in to play for summerfruit or will marketers have the sense to come together and sort the issue out. A race to the bottom for prices, does nothing for the sustainability of the industry going forward.

SummerfruitNZ has charted the seasons combined farmgate and retail prices for the last season
https://www.summerfruitnz.co.nz/assets/NZ-market/Combined-farmgate-and-…

Good to have you back Aj. Its possible you were never gone, I havn't dallied here a lot lately.
Yes these troublesome big highs. What is going on? When was the last time we had the remains of a cyclone actually make it to us. It must be at least 3 years. We currently have plenty of good pasture cover, but the dams are wee puddles.
Whats the ryecorn variant you are using Aj? How did all those differing crops you put in last year go for you?