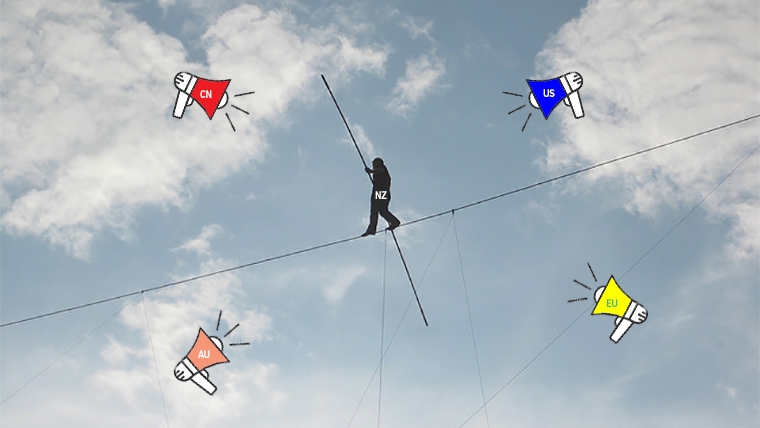 The degree of exposure to reliance on China as New Zealand’s largest trading partner can be viewed as perfectly acceptable or a big risk.

Over the last 20 years the FTA signed by the Clark government and recently upgraded has been the catalyst for a massive change in where we send our exports, especially agricultural commodities.

In 2000 Australia, USA and Japan were by far our biggest customers with China only sixth behind the UK and South Korea as well, but by 2020 China had surged into first place, buying twice as much by value as Australia in second place. The other countries on the list were the same as before.

Therefore China has been the main reason for the large rise in the amount of business we do with the world. The question is whether we should be worried about it.

At face value exports to China make up about 25% of total exports which is in strong contrast to the days of much greater dependence on the UK before it joined the Common Market in 1973.

Other countries have greater exposure to China as a buyer, such as Australia and Chile at more than a third of their exports, so on this basis New Zealand does not seem to have anything to worry about.

What is certain is our government is trying to perform a high wire balancing act between upsetting China when criticising it for human rights breaches like its treatment of Uyghur Muslims and Hong Kong protesters or getting offside with our ‘five eyes’ partners who think we have gone soft on China. Australia has discovered how China reacts to criticism with bans on some import categories and imposition of tariffs on others despite the FTA.

Some industries – sheep meat and beef, seafood, wood products, as well as Covid-affected tourism and education – are particularly susceptible to China turning off the tap.

The meat industry has shown itself to be very agile when faced with being shut out of markets, for example by Indonesia, but there is no doubt China’s current and future importance to export returns and farmers’ incomes should not be underestimated.

Politicians vacillate between encouraging exporters to trade with China and suggesting weakly they should avoid having too many eggs in one basket. That is the key issue, because government’s job is to facilitate trade through negotiating or maintaining access, while the exporters, usually but not exclusively privately owned companies, develop strategic, long term customer relationships.

In some cases ownership of agricultural companies is shared between New Zealand and Chinese partners, for example Silver Fern Farms and Synlait, while Westland Dairy and others are fully Chinese owned.

The totalitarian objectives of President Xi’s China will inevitably clash with the interests of shareholders in New Zealand companies when these butt up against a diplomatic fall out from actions or statements by the New Zealand government which China objects to.

The Chinese reaction will depend on the degree of offence caused, but it is clear Xi’s view of the world will inevitably clash with our wish to avoid irretrievable damage to our relationships with our traditional allies.

The democratic system in this country and our allies is in fundamental conflict with China’s “socialism with Chinese characteristics” or capitalism in a police dictatorship.

Support us by going ads-free. Find out more.

Some commentators have suggested China’s drive for world dominance (control of the South China Sea, the Belt and Road Initiative, strangling independent thought in Hong Kong and threatened reintegration of Taiwan) is encouraged by its perception of the weakness of the West.

It believes it will overtake the United States as the world’s largest economy within 10-15 years, but this is far from certain. Its population is declining by three million a year and rising because of the irreversible trend to urbanisation and single child families which it has tried to reverse too late.

Its productivity growth rate, previously running at 3% annually, will come down to under 1% as the economy slows to the more normal rate of a developed economy.

Under Xi’s suspicious, narrow-minded dictatorship, China is dismantling the approach initiated by Deng Xiaoping to liberalise the economy and engage with the United States, with the Communist Party of China no longer believing engagement is useful.

The Telegraph’s Ambrose Evans Pritchard notes the incoherence of the Xi model will blunt the Chinese threat over time because ‘its contradictions and controls will sap the dynamism from the economy’ by back tracking on reforming the dysfunctional state owned companies which are needed for party patronage and posting commissars inside private companies.

This all poses a challenge for New Zealand’s government and its businesses, especially those substantially dependent on China, whether in the form of partnerships, investment or a large proportion of revenue.

The government is on a hiding to nothing: it can throw its weight behind our involvement with China, speak out on matters where China crosses certain red lines, or continue to conduct its high wire balancing act, hoping against all realistic hope it does not offend either side.

The one thing in New Zealand’s favour is our ability to produce high quality food which China needs and cannot produce itself in sufficient quantities or import from other ‘’friendly” countries.

Any company that continues to allow itself to be dependent on China, deserves what they will inevitably suffer.
Our whole country needs to single mindedly but politely concentrate on removing China's tentacles from our throat.

I wholeheartedly recommend Allan Barber ring fences his opinions and articles only regarding NZ and even better only regarding the agriculture sector in NZ.

I cannot believe how lack of knowledge and insights Allan is when it comes to geopolitics. By citing unfounded accusations from the US medias against China does not make you an expert in this sensitive area.

You biased and opinionated comments on China and its leadership is very laughable.

Your comments on how China relies on NZ's 'high' quality food is beyond laughable.

I wish you could have an opportunity to visit China once the border is open. Your eyes would be wide open.

Man you really provide us with some great comedy value!!!!

Is that voltex power device add running just on my interest page or everyone’s? Not really a good look on a credible news site me thinks.

Under Xi’s suspicious, narrow-minded dictatorship, China is dismantling the approach initiated by Deng Xiaoping to liberalise the economy and engage with the United States, with the Communist Party of China no longer believing engagement is useful.

How do nations (even allies) engage with the United States when faced with disturbing actions and threats?

One of Russia's top lawmakers, Senator Alexey Pushkov, has defended his country's decision to demonstrate the capabilities of a new high-tech rocket system, saying that it is Washington, not Moscow, that is escalating tensions.

Pushkov spoke out on Tuesday after US Department of Defense Spokesman John Kirby said that the launch of the hypersonic Zircon missile from a Russian warship in the White Sea was a “destabilizing” move. “You'd have to ask [Russian President] Vladimir Putin why he's chosen to go down that route,” the official was quoted as saying. Hypersonic weapons were banned under the Anti-Ballistic Missile Treaty, from which the US withdrew unilaterally in 2001. Putin said at the time that the White House's decision was a mistake.

Responding to the comments, Pushkov said that it was dishonest to suggest it was Russia destabilizing the state of relations between the two powers, citing “the purposeful encroachment of NATO on the country's borders, the militarization of Ukraine, the stationing of American troops to neighboring countries and the deployment of missile defense systems in them.”

He also slammed the “introduction of 75 different sanctions – which are a series of acts of economic war,” and asked, “Is Kirby aware of all this?” Link

Regardless, much now depends on Britain. A 12-mile transit would provide physical proof of the special relationship's defining essence: the willingness of allies to bear arms in common cause and against mortal threat. It will show Beijing that democracies are awakened.
Will America stand alone?
Let us hope Johnson channels his hero, Winston Churchill.

Possibly. Or was Deng's openness just a necessary step in the master plan.