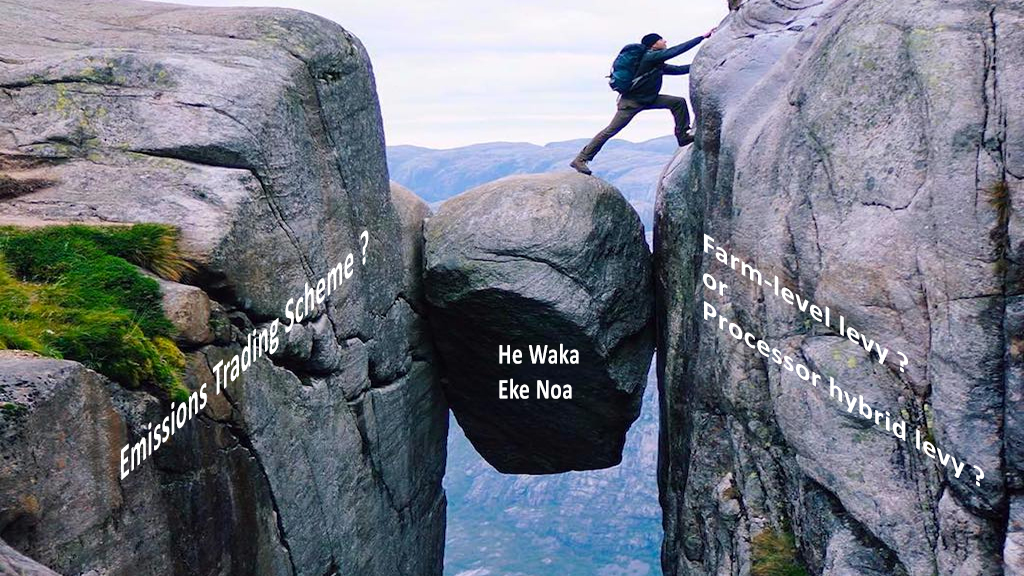 Over the next two months farmers will have to digest and consider the pros and cons of two alternatives for on farm emissions calculations before the agricultural sector climate change partnership He Waka Eke Noa has to take an agreed position to the government. The government’s fall back position is to compel the sector to join the Emissions Trading Scheme, if the industry cannot make a choice on its own.

As most farmers will be aware HWEN is a partnership between government, iwi and sector leading organisations, Federated Farmers, DairyNZ and Beef + Lamb NZ. This partnership has already been successful in gaining government consent to design an achievable means of reducing agricultural greenhouse gas emissions to an agreed set of targets by 2030 and, more crucially, by 2050. The next critical milestone is for the sector to obtain government approval for a firm proposal to be presented by an April deadline.

It must be emphasised at this point the method of calculating emissions, whichever option is chosen, will remain set in stone, once the parties have negotiated and agreed it. But the actual targets for methane and carbon reduction may change and will be outside the HWEN or ETS processes. Consequently there is nothing to be gained if farmers reject both options just because they don’t like the targets.

There is still time for farmers to refine the alternatives or come up with another one by lobbying their representative organisations before or at meetings to be held in February, but time is tight to make any radical changes to the carefully considered options. If, as is probable, many farmers have not yet got their heads round all the detail and implications of each alternative, the February meetings are particularly important; firstly to ensure the options are clearly explained and secondly to gain a clear signal of farmers’ preference.

A brief summary of the options demonstrates two key differences: a farm-level levy would be calculated using farm specific data and would reward actions already taken to reduce emissions and eligible on-farm sequestration.  In contrast the processor-level hybrid levy would be paid on the average emissions based on the total quantity of product delivered to the processor with each farm being able to claim a rebate for actions taken on-farm and sequestration. Similarities of the two options are the split gas approach which recognises the differing impacts of methane and long-lived gases like CO2, and the reinvestment of levy revenue in R&D into emissions reducing technology.

The farm-level levy would potentially cost more to administer, but it would have the benefit of rewarding farmers on the basis of farm performance calculated using the GHG farm emissions calculator, with farm-specific technical mitigations, sequestration from planting programmes and wetland conversion being recognised individually. The less administratively onerous processor-hybrid levy may be able to act as a transition to the farm-level levy, but individual farms would need to apply for qualifying rebates for sequestration and emissions reduction actions. Another disadvantage is the inability to capture non-finishing properties for product supplied to the store market.

B+LNZ chairman Andrew Morrison emphasises New Zealand’s world leading status in agricultural production, as well as being the first country in the world where the agricultural sector and government are working together to design a mutually acceptable outcome. The Paris Accord’s goal is for the most efficient producers to feed the world’s population which should certainly guarantee New Zealand’s food producers a place near or at the head of the queue.  The split gas approach is another world first, acknowledging the important difference between methane which is a short-lived gas in the atmosphere and does not need to achieve the unrealistic objective of zero emissions to be warming-neutral.

This perspective is supported by the report “Methane and the Paris Agreement temperature goals” published in a Royal Society journal and authored by internationally respected scientists and policy experts. This report builds on the recent International Panel on Climate Change conclusion methane’s contribution to global warming is overstated where emissions are not increasing, as is the case in New Zealand. Public perception about agriculture’s contribution to global warming fails to appreciate the use of the wrong measurement (Global Warming Potential over 100 years – GWP100) for methane emissions, while the government has not yet explained the science to the public.

Morrison is convinced of the need for farming to take responsibility for its emissions which is the reason he personally favours the farm-level levy option, although he recognises it may be difficult to have 25,000 farms mapped and calculating their GHG profile by 2025. He says all farmers must ideally “own their own problem, and know their contribution to the problem and the solution.” Setting an example to the sector, he has recently bought his first cut of low methane emitting rams, mapped his  farm and planted 9% of what were traditionally called “ineffective areas” in trees and plantation forestry while still maintaining stocking rates.

Federated Farmers chair Andrew Hoggard also favours the farm-level approach because he believes the system should incentivise farmers according to their relative efficiency, as well as lessening the emissions leakage which would inevitably occur with the levy applied at the processor level. He acknowledges it will be easier for dairy than sheep and beef farms to measure, but the GHG calculator will facilitate measurement. Hoggard and Morrison agree three large positives of each option over the ETS default option: it recognises the split gas differential, the levy is applied to the industry, and it also recognises non ETS sequestration, for example regenerated native bush and riparian planting. Both Feds and B+LNZ agree putting agriculture in the ETS won’t achieve the government’s objectives.

Hoggard says it is very important the sector reaches an agreed position, especially to avoid being put into the ETS, but also longer term he believes any future government is most unlikely to change the option adopted by the partners to this process.

It may seem like a rush to meet the government’s April deadline, but the hard work already invested by the industry partners means there is a great chance of reaching an historic agreement which will guarantee New Zealand agriculture certainty and a prime global position.

Good to hear. Although trusting this govt to accept the proposal is another hurdle, yet to be negotiated.

Hopefully National reverse most of this nonsense but I doubt it. They'll probably take their queue from Federated Farmers who are also now on the emission reduction band wagon, albeit having been forced to.

National voted for the ETS.

Previous accounts of these two options that I have read include a statement that the assessment is that neither option will result in more than the most minor reduction in carbon emissions. If true, it makes the whole exercise an exercise in greenwash.

My per cow production and feed grown on farm is very high, well above average and according to fonterra reports my CO2E per kg/ms is well below average.  Yet for some reason, being a highly efficient producer isn't recognised as a mitigation strategy.  The only way to get a discount on the carbon prices is planting trees, reducing inputs, reducing stocking rates and generally farming less efficiently.

if your logic is correct then all low input and inefficient producers could follow your lead and produce more like you are and decrease their emissions per kg of production BUT then NZ emissions rise.

That is not the solution

Thats if you went with the "producer wide model". You would be better off if they went with the farm plan model . Although your "carbon" payment for the farm may go up or stay the same , your cost per kg/ms would go down . so you would make more money .