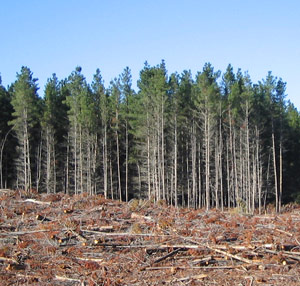 It seems a bit strange that the government has just invested millions in the meat industry Primary Growth Partnership to revive the fortunes of sheep and beef farmers, while their ETS scheme,  is encouraging them to exit the industry and convert to carbon farmers.

The total economic return of a profitable meat industry and its down stream spinoff ,will be a much more productive economic driver, than letting the land revert to scrub.

With sheep numbers getting close to a critical mass whereby efficencies are exposed in trying to produce year round products, encouraging a scheme that will generate little for NZ's economy seems ridiculous.

Being the only national emission scheme outside Europe would seem very dangerous for a small trading nation like ours.

NZ's sheep farmers are flocking to a Government carbon trading programme that pays more to plant trees than sell wool and mutton reports The NZ Herald. The system, begun in 2008 and the only one of its kind outside Europe, awards farmers credits sold to offset greenhouse gas emissions. The project may earn them about $600 a hectare a year on land unprofitable for grazing animals, said David Evison, a senior lecturer at the University of Canterbury's NZ School of Forestry.

Forests planted for carbon credits may increase to 30,000ha a year compared with 3500ha last year, the Government estimates. The system is a welcome alternative for sheep farmers who have struggled for decades from a combination of slumping wool prices, drought and competition for land from the dairy and lumber industries, says Neil Walker, a forester in the Taranaki region.

Carbon trading is embraced by some farmers and rejected by others as too harsh a change for New Zealand, the world's biggest sheep meat exporter last year. By 2015, the system will include agriculture, forcing farmers to pay for emissions their cows and sheep make through belching.

"We're the only national emissions trading scheme outside of Europe," said Nigel Brunel, head of futures trading at Auckland-based OM Financial, which acts as a broker for carbon trading "If at the end of 2012 we're the only country standing there, then we will give up." Spot prices for carbon credits were $18.45 a metric tonne on August 16.