Fonterra seeks up to NZ$525 mln through Shareholders' Fund offer with units to be priced between NZ$4.60 and NZ$5.50 each

Rural News
Fonterra seeks up to NZ$525 mln through Shareholders' Fund offer with units to be priced between NZ$4.60 and NZ$5.50 each 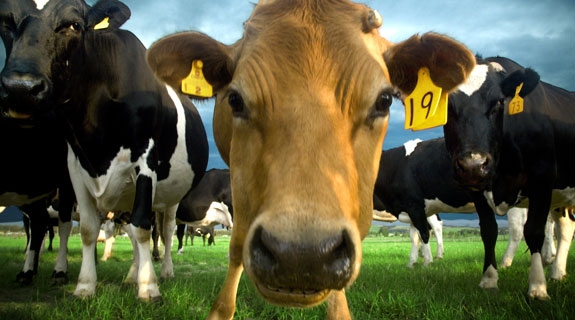 Fonterra has detailed its sharemarket debut saying units in its new Shareholders' Fund will be sold for between NZ$4.60 and NZ$5.50, with trading set to begin on both the NZX and its Australian equivalent from November 30.

The price range is above Fonterra's most recent fair value share price of NZ$4.52.

The dairy co-operative says its offer comprises NZ$500 million worth of units, with the ability to accept oversubscriptions of up to another NZ$25 million. Fonterra is forecasting a dividend for its 2013 financial year of 32 cents per share, implying a 2013 gross distribution yield of 5.8% to 7% depending on the final unit price.

Here's Fonterra's presentation and its prospectus is here.

Fonterra today outlined details of a unique opportunity for the public to participate in the Co-operative’s performance with the release of an Offer Document for the Fonterra Shareholders’ Fund.

Chairman Sir Henry van der Heyden said that for the first time in Fonterra’s history, and with Farmer Shareholders’ support, members of the public will be able to gain exposure to New Zealand’s largest company and the world’s largest dairy processor by buying Units in the Fonterra Shareholders’ Fund.

“This will provide permanent capital for Fonterra and reduce redemption risk, while preserving 100% farmer control and ownership of the Co-operative,” said Sir Henry.

“It is a historic day for the Co-operative. The Fund provides a unique opportunity for the public to gain exposure to the financial performance of Fonterra and the global dairy industry.

“Farmer Shareholders and Unit Holders will invest in the performance of Fonterra through separate structures. What they both have in common is the chance to be part of the continuing performance of our Co-operative – a New Zealand success story,” said Sir Henry.

Chief Executive Theo Spierings said that Fonterra’s performance shows it is a leader in the international dairy market, and a unique investment opportunity.

“NZ Milk Products is the backbone of Fonterra, collecting milk, manufacturing dairy products, and exporting to customers around the world. Our sales networks reach customers in more than 100 countries. Products range from everyday dairy nutrition powders, to advanced dairy nutrition products, and our customers include five of the world’s biggest infant formula manufacturers and many of world’s largest food companies.

“Fonterra builds on earnings from New Zealand and internationally-sourced milk through integrated regional businesses which focus on branded consumer dairy products, and out-of-home foodservices. Our regional businesses achieved sales of around $6 billion across a diverse range of geographies and product formats in the last financial year.

“Fonterra is well placed to meet rising global demand for dairy, with 72% of our NZ Milk Products’ sales volumes and 46% of our regional business revenues coming from emerging market regions in the last financial year.”

Fund Chairman John Shewan said the Fonterra Shareholders’ Fund was a unit trust that would acquire the Economic Rights of Fonterra Shares and issue Units to investors.

“Farmers and other investors can purchase Units in the Fund which will give them exposure to the Economic Rights of a Co-operative Share – dividends and capital gains or losses on those Shares,” said Mr Shewan.

The indicative price range for Units in the Fund is $4.60 - $5.50. The Final Price payable per Unit is expected to be announced on or about 27 November 2012 following the completion of a bookbuild process, under which selected institutional investors and NZX Firms are invited to lodge bids indicating the number of Units they wish to apply for at a range of prices. The Final Price could be within or above the indicative price range.

The prospective financial information of Fonterra referred to above should be read in conjunction with the assumptions, sensitivity analysis and the risk factors described in the Offer Document.

Key facts about the Fund Offer

Structure of the Fund Offer

The Offer comprises $500 million of Units (with the ability to accept oversubscriptions of up to a further $25 million).
Although there is no general public offer, investors are encouraged to contact a NZX Firm to determine whether they can participate in the Offer to buy Units in the Fund through the Broker Firm Offer.
The Broker Firm Offer is available only to New Zealand resident clients of NZX Firms who have received an allocation from that NZX Firm.
The Friends of Fonterra Offer recognises the contribution that employees, sharemilkers, current and retired Shareholders have made to Fonterra’s performance since its formation. Minimum application amounts under this offer are set at $2000. Maximum application amounts under the Friends of Fonterra Offer offer are set at $50,000, except in respect of Fonterra's New Zealand and Australian employees, whose maximum application amount is $25,000. This offer is extended to:
Fonterra Farmer Shareholders, as at 26 October 2012.
Fonterra-supplying sharemilkers, as at 26 October 2012.
Former Fonterra Farmer Shareholders who have retired from the industry after 26 October 2007 and have not supplied a competitor of Fonterra since last supplying Fonterra.
Permanent employees in Australia and New Zealand.
Up to $25 million of Units have been allocated for subscription under the Australian Supplier Offer to shareholders of the Bonlac Supply Company Limited and suppliers of milk to Fonterra Milk Australia Pty Ltd (both of which are Australian registered companies).
The Institutional Offer consists of an invitation to bid for Units made to selected Institutional Investors in New Zealand, Australia and certain other jurisdictions.

These dates are indicative only and may be amended. Any such amendment will be announced through NZX.
1. Represents the total dividend (unimputed) expected to be paid by Fonterra to the Fund in FY2013 excluding the investor-level tax, divided by the implied Fund capitalisation.

2. Application has been made to NZX to quote the Units on the NZX Main Board and all the requirements relating thereto that can be complied with on or before the date of release of this media release have been duly complied with. However, NZX accepts no responsibility for any statement in this media release. The NZX Main Board is a registered market operated by NZX, a registered exchange regulated under the Securities Markets Act 1988. If units are quoted on the NZX Main Board, the Fonterra Shareholders' Fund will bear a Non-Standard Designation. Application has been or will be made to ASX to have the Fund admitted to the official list of the ASX and units admitted to quotation on the ASX. ASX accepts no responsibility for the Offer or for any statement in this media release.

So you gotta go cap in hand to your stock-broker , to plead for an allotment of shares in Fonterrible  ......

Dairy farmers need, more than ever now, to setup cooperatives within the cooperative otherwise they will ultimately be shafted.

Dairy farmers should set up areas throughout the country, where they all join forces and set up a number of cooperative dairy farms as this will ultimately protect them.

Since Rogernomics leaders in industry have shafted this country and many of its people for their own agenda and greed. If farmers don't take protective action now they wont survive later.

Well, that is my opinion for what it is worth as i am not a farmer.

What  your suggesting mike is a return to pre Fonterra days. And as unlikely as that may seem  I have thought for a while that that may be possible. Certainly reading the info coming from Fonterra and the NZX and others TAF is looking more and more like the monster that farmers rejected 2 years ago.

The irony would be that that scenario of a breakaway would create a redemption problem and I think if that happened I would simply die of laughter.