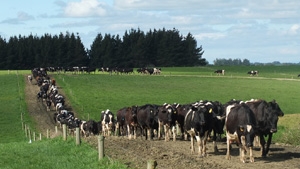 Roger Dickie NZ has launched a dairy farm investment syndicate that will have almost no debt.

The company is best known for putting together forestry investment vehicles, but its latest offering, Eastbourne Dairy Farm Ltd, will be its third dairy farm offering and it has also previously syndicated a sheep and beef property.

Eastbourne has been set up with a company structure in which investors will buy shares, with 11 million shares on offer at a dollar each and the minimum investment being $25,000.

The proceeds will be used to buy an established 241ha dairy farm in Southland and a 520 cow herd.

Unusually, the company will have no debt apart from a $150,000 seasonal overdraft facility, with all of the capital required to purchase the farm and herd and meet the company's set up costs, coming from investors.

Most farming syndicates carry some debt and Roger Dickies' previous syndications were no exception.

Roger Dickie marketing manager Richard Bourne said the debt-free structure was proving popular with investors and the company was getting a good take up of the offer, with individual investors putting in between the $25,000 minimum and up to $1 million.

"We all know the world changed in 2008 and there were a lot of fingers burned," he said.

"There are people who are relaxed about investing in something like this, a real, tangible asset with no debt.

"It's not all about making a lot of money, security of capital is also upper mind with a lot of investors."

The investment statement is forecasting an average pre-tax dividend return over the next 10 years of 5% of the amount invested, with dividends to be paid annually.

Any capital gains from the sale of the property when the syndicate is wound up would be on top of that.

Effectively Roger Dickie has underwritten the offer by acquiring unsubscribed shares and then selling them down, which allowed settlement of the sale of the property to Eastbourne to be completed last month, so the farm is already up and running.

It will be managed by a young share milking couple on an annual contract.

The lack of debt has removed most of the interest rate risk from the investment, which is often a concern for property syndications.

However that will not affect the risks faced by most farming businesses, such as unfavourable weather hitting milk production and changes in the milk price.

The farm has a contract to supply milk to Open Country Dairy and the prospectus forecasts are based on a milk price of $6.80per kg of milk solids being achieved.

Milk prices have been easing recently and some economic forecasters have picked that they could be headed down towards $6kg, but even that would give investors some wriggle room.

The prospectus puts the farm's operating costs at an average $4.72 per kg of milk solids a year, and says the milk price would need to sink to $5kg before the directors "would need to review the ongoing liquidity and operation of the company."

However picking such trends over the medium to long term is difficult and Bourne points out that volatile milk prices are nothing new, with Open Country's milk price ranging from $5.75 to $8.50 over the last five years. See our dairy industry payout history page here.

Like most syndicates, Eastbourne will have no termination date or redemption facility and its shares will be unlisted.

It will be wound up by a special resolution of shareholders which would require a 75% majority vote in favour.

Although there is no way of knowing when that might occur, and therefore when investors could their capital back, Bourne said they should be prepared to invest for around 8-10 years.

If they wanted to sell their shares prior to that they could, and Roger Dickie operates a grey market by attempting to match prospective buyers and sellers of shares, but does not offer any guarantees in that regard.

Those costs costs include $100,000 in brokerage fees and a $50,000 promoter's fee payable to Roger Dickie, which is modest compared to recent commercial property syndications.

Roger Dickie will also get 10% of any capital gains when the farm is sold.

And how are capital losses to be shared?

Its set up to only make profits. Every day is a sunny day.

If they wanted to sell their shares prior to that they could, and Roger Dickie operates a grey market by attempting to match prospective buyers and sellers of shares, but does not offer any guarantees in that regard.  Anyone who buys in to this and if it doesn't have a shareholders agreement with a guaranteed sunset clause, they could be very disappointed.  Buying in to a dairy syndicate with potentially hundreds of 'owner/shareholders' should also give cause to obtain very good legal advice before signing up.  I hope they will have an independant Chairman of the Board.

Ooooh, a single farm, managed by  "a young share milking couple on an annual contract"...

Ya has to luv the smell of Risk in the morning to stump up, shurely....

I guess I'm missing something cause I can't see  how any of that isn't "normal" risk. Although  I do agree somewhat over the sharemilkers, in years gone by they would have been on a three year contract, year by year means they simply don't buy into they farm to the same existent because they might not be there next season.

5% pre tax?  be still my beating heart.  I can get better on property almost anywhere in NZ.

Costs targetted at $4.72?  With no interest?  that's rather high.
And sharemilkers with no reason to look after the place or contribute.

Lets mark that "another day"