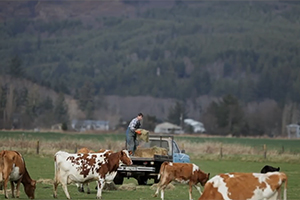 This last week I have been in Tillamook, in Western Oregon. Together with three colleagues from Calder Stewart, I have been exploring the dairy systems here, to see what learnings we can bring back to New Zealand.

Tillamook is a high rainfall zone on the Pacific Coast and has much of the same feel about it as the West Coast of New Zealand.  It is one of the few places in the world where dairy cows can be grazed on perennial pastures, and using the same grass species as we use in New Zealand. The latitude is 45 degrees North, which is a latitudinal mirror image of Oamaru, Alexandra and South Westland.  But climatically, it is Westland that is the best comparison.

Winters are always wet in Tillamook but the current season has been particularly wet and cold, with four metres of rain in seven months since October.  A winter day is about 10 degrees and a summer day around 20 degrees. On that basis, we noted during our stay this week that summer has still to come!

In Tillamook, everyone sheds their cows in the winter from the cold and rain, and also to protect the pastures. Most farmers have their cows in barns all of the year. But our keen interest was to observe the hybrid systems, where cows graze outside from spring to autumn, but farmers still use the barns on an ‘as needs’ basis throughout the year. 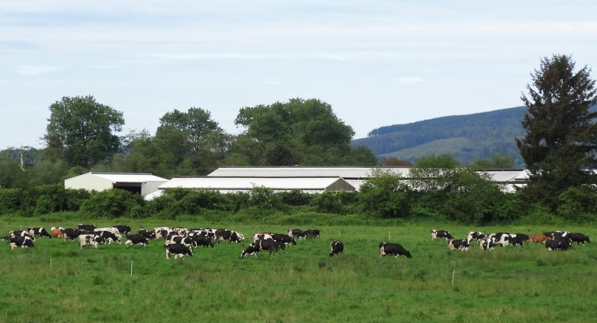 Dairying is the dominant Tillamook industry

We found was that there is considerable diversity of system. Most barns are free-stall, but some are compost systems – more on that later. Most farms still milk through herringbones and rotary sheds, but there are increasing numbers of robots, including on grazing farms.

All farmers supply the Tillamook Dairy Co-operative which is famous for its cheeses. Tillamook started branding their cheese way back in 1925, and their members now receive milk cheques about 35% higher than standard American commodity prices. In some ways, Tillamook is the Tatua of American dairy, but with more emphasis on consumer products and less on specialised ingredients than Tatua. They are a great example of how a co-operative can bring benefits to all its members.

All Tillamook farmers except for one farmer supply milk all the year round, and that is the way the cheese factory likes it. The one exception is a grazing farm, but this farm still sheds the cows in winter.

Our visit was organised by Troy Downing from the Oregon State University Extension System who is based in Tillamook. Troy has visited New Zealand and understands our systems. He is also a great fan for grazing systems and has no great love of barns. But the reality is that barns are essential in Tillamook for environmental and market-related reasons.

Troy asked us why we in New Zealand would want to use barns if we do not have to. My response was that we have environmental and market-related reasons, just as they do, that are forcing us to do a rethink of the way we will farm in the future. So, at the very least we need to fully understand the pros and cons of barns.

Troy told us that his own preference is for compost barns where the cows lie on the compost under a covered roof. In a well-managed compost barn, the manure generates considerable heat which keep the cows warm and dry. There is no smell in a well-managed barn. It is only if non-aerobic bacteria are present that there is an unpleasant odour.  The udders stay much cleaner than in a conventional free-stall barn. 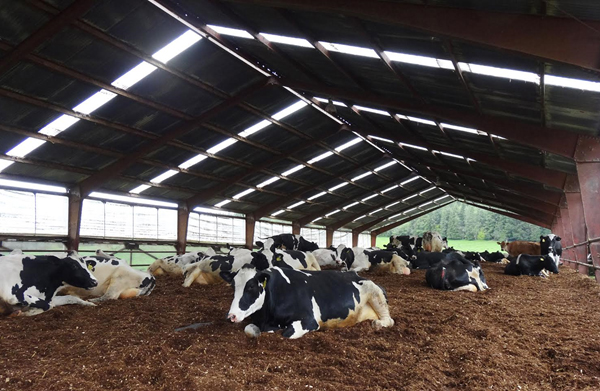 The compost beds are tilled twice-daily for aeration – this is essential. Straw is added every three days and wood chips are added weekly.   Once a year, the compost is taken out to the fields.  The standard rule is that the large American cows require seven to nine square metres of compost bedding space. 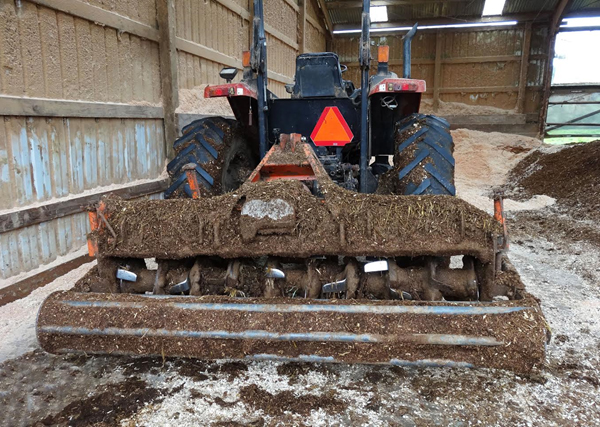 Blaise told us they were very happy with their compost barn, which was much cheaper to build than a free-stall barn. Also, their cow replacement rate had declined considerably. The only disadvantage appeared to be the cost of the wood chips, and this is something we would need to look at closely under New Zealand conditions.

The Bennetts were also very pleased with their investment in robots. Milk production increased 10% to 2.65 kg of milksolids per day (all year average) with no appreciable increase in feed after they installed the robots. Their new system of robots plus compost were also giving very low somatic cell counts – much lower than average New Zealand numbers.

One of the grazing farms we visited was set up some thirty-five years ago by Kiwi Rob Seymour and his American wife, Amy. We were shown around by their son John who now manages the farm. Rob and Amy met when Amy came out Lincoln University on an exchange from Oregon State Uni, and son John also spent a semester at Lincoln in 2010.  So they, and also others such as Tillamook farmers Brad and Melody Cowan whom we visited, know and understand the New Zealand system very well.

In Oregon, the grazing system does have to be adapted to a hybrid. Troy has calculated that on the Seymour farm about 65% of the milk comes from grazed pasture, with the rest from barn-fed TMR (total mixed ration) feed. The Seymour cows are typical KiwiCross from LIC semen, and produce about 500 kg milksolids (peaking most years at about 2.4 kg per day). In Tillamook, the grain-fed component can come from the Mid-West, some 2000 km away, and the alfalfa hay typically comes from Idaho. Silages are grown locally.

When we were there, the rain had been coming down and so the Seymour cows were inside. The cows adjust without problem to the nutrition change, but they do like to get outside again when the sun shines.

We visited a fascinating grazing farm owned by Kurt Mizee who milks 175 high performance cows with three Lely robots.  The cows have to walk up to 1.6km for grazing, but his system gives him about 2.8 daily milkings per cow. Kurt, who is also now the local Lely dealer, is currently designing a robot grazing system for a 1200 cow organic farmer.

A key characteristic of Kurt’s system is the mix of feeds. The cows need feed incentives to head out to fresh pasture, but a different feed incentive to come back to the barn. So, whereas the Seymour grazing system was all-pasture whenever the weather allowed, for Kurt’s system it was a mix of pasture and TMR even in summer.

A number of farmers we met are interested in cow genomics and they are using this to drive cow production. Kurt selects strongly for free-milking trait. This is because he needs the cows to get in and out of the robot quickly so another cow can get in. Sexed semen, and embryo transplants all play a part within his system.

For me, there have been lots of ‘take away’ messages from Tillamook, including some that were unexpected. I have decided I now need to learn more about compost barns. The role of genomics in selecting for specific traits is something else I need to do more thinking about.  There is no doubt that Tillamook is doing extremely well from its value-add focus, but of course that has been a long journey. And they can only make it work with 12-month supply of milk. 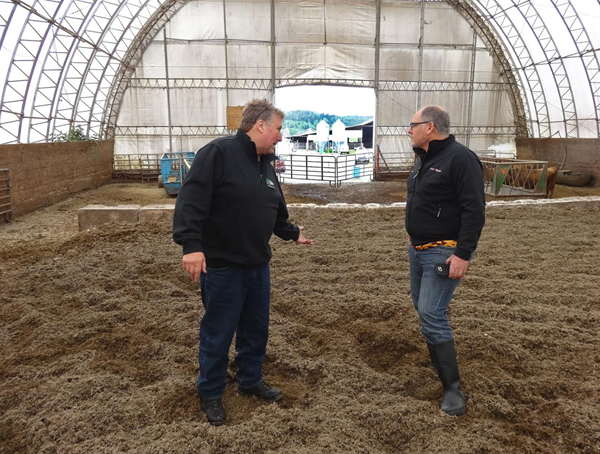 That was actually very interesting ...

Keith, google hoop barns, looks like lots appearing in mid west. In alberta where I used to work they are looking at them. They have grown their beef herd over the past fifteen years from 200 to 1500, and thinking about going to 2000. Low grain prices is getting them thinking about fattening cattle on seconds. How fat is the furthest farm in Tillmock from the factory? Thanks for writing this good read.

Thanks Keith, the Compost barn may be the future for NZ dairy. Robots haven't exactly taken off here, It would be nice if we had our own hybrid system that works for us that maintains our low cost structure but is also more environmentally friendly.

The point about barns is that they concentrate wastes in a small, known area. From there, they can be dealt with exactly as towns deal with their wastes: treatment, re-use and isolation from the wider environment until in a suitable state for emission.

KW is also quite right where, in earlier articles, he points out (gently) that we don't have much economic short-term alternatives to dairy. So the effort has to be, as this article notes, to make it more efficient AND more sustainable AND more economic, all at once.

A worthy challenge, not amenable to sound-bites.....

The question for NZ dairy is what does it want it's point of difference to be with the rest of the world?
I am hearing more farmers say we need to promote the 'NZ Story' more - grass fed, cows outside etc as barn systems are what 'the rest of the world is using'.

The question of wood chip availability is a very relevant one, Keith, and I look forward to hearing what you find in that regards. There are farmers who are chipping entire tree windbreak rows of macrocarpa etc due to the financial benefits to be gained from selling the chips.

Casual Observer
I am travellng (now in Euroepe) so this is just a quick response. The Oregon regulations have been somewhat lax in the past. But there are solutions. Their key issue is probably E coli and related, and in a very wet environment, rather than N leaching, which in general they are managing OK. The compost system means that manure can be easily stored until the spring.. More to learn!
Keith W

I wonder if you can wood chip wilding pines for the sake of composting?

They could be so long as you have a market close by. Also it has to be clean - no 'green' waste. One farmer I spoke to is currently paying $24/cube, delivered, and says for it to be viable cost for calf sheds in their operation, it has to last 2 years. They are approx 12mins from the mill. Apparently down south it is currently difficult to obtain.

Calder Stewart are in the business of building barns . Proff Woodford describes himself as an independent consultant. This advertorial should be advertised as such .
Where is the balance ?
You can manage high risk ,nitrate leaching events without spending millions on a barn.