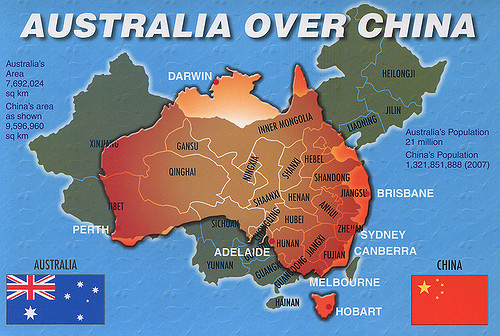 On a recent trip to Australia I read an article about overseas land holdings on that side of the Tasman which illustrates the dramatic growth in Chinese investment in Australian agricultural land. In contrast to the rather sketchy and out of date statistics available in New Zealand, the Foreign Ownership of Agricultural Land Register provides very specific figures at 30th June this year.

Foreign investors now own 13.6% of Australian agricultural land, up from 11% three years ago, with British investment at 33% still the largest source of foreign capital, although this percentage has fallen sharply from 52% 12 months earlier.

The figures show Chinese entities now own, either partially or outright, close to 4% of the total farming area or 29% of foreign held land, having increased their holdings from 1.4 million hectares to 14.4 million in the twelve month period. This change has largely occurred through sales by British to Chinese ownership rather than a substantial increase in the actual amount of land owned by foreign investors.

Other major foreign owners include investors from the Netherlands, Canada, Switzerland and Singapore who increased their purchases and the United States which was the only large investor group who appear to be losing enthusiasm for Australian farming land. Tasmania is the state with the largest proportion of foreign ownership at 24%, following the purchase of Van Diemen’s Land dairy farms for A$280 million in 2016 by Chinese billionaire owned Moon Lake Investments.

A Scandinavian/British enterprise Ingleby Farms has also invested in dairy farms in Tasmania. Northern Territory and Western Australia also have substantial levels of foreign investment in agricultural land, with Chinese interests buying up cattle stations in the Kimberley.

The general attitude to foreign agricultural investment in Australia seems to be less paranoid than in New Zealand, although the Federal Government tightened the rules for approval and introduced a foreign land register in 2015. However New Zealand’s existing OIO approval requirements impose a similar level of scrutiny with major transactions being referred to the relevant minister.

This could all change after our election result and the composition of the next government which either way will involve New Zealand First and its determination to prevent the sale of agricultural land to overseas investors. A Labour/Greens/NZ First coalition will definitely impose tight restrictions on overseas ownership.

Statistics for overseas investment in New Zealand are much harder to track, although in 2011 the total was stated to be 8.7% or 1.3 million hectares. However estimates vary widely up to as much as 20%, although sales of forestry land far outweigh agricultural and horticultural land sales.

What is certain is overseas investment in our agricultural sector is about to become a lot more difficult.

Well they certainly have a lot of mouths to feed. Check out Bloomberg's global food map for China: https://www.bloomberg.com/news/features/2017-05-22/china-spins-a-global-...

Article quote: "Faced with a shrinking area of good arable land and a population of 1.4 billion people who are eating more, Chinese agriculture companies have been buying or leasing farms abroad for decades.

After the world food crisis, when grain prices soared from 2006 to 2008, that investment went into overdrive. But many projects were plagued by corruption, mistrust, local resistance and trade restrictions".

If the NZ version is simply a tightening of the net and continues to be done behind closed doors with continued non-disclosure as at present in many cases, the suspicion of brown-paper-bag country will continue

We will end up like rural USA if we are not careful
http://www.cracked.com/blog/6-reasons-trumps-rise-that-no-one-talks-abou...

Oh, so Landcorp is Australian, or is it American, I get the two so confused.
https://www.stuff.co.nz/business/farming/98063078/chinese-bidder-for-jer...