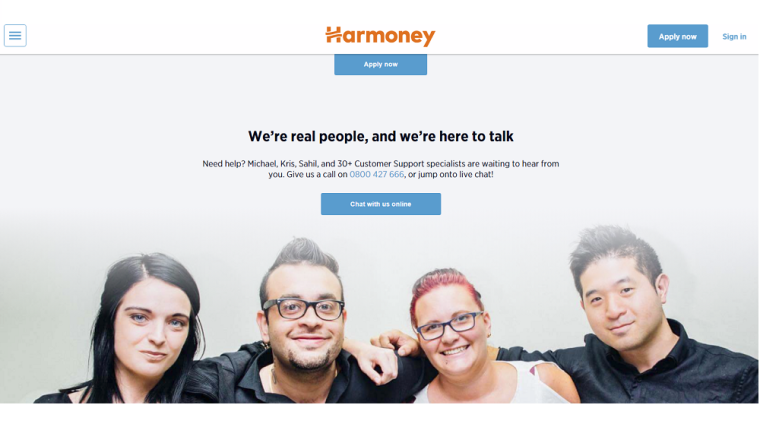 Peer to peer-turned "online" lender Harmoney has posted a maiden after-tax profit, courtesy of adoption of a new accounting standard that boosted its after-tax earnings by $7.5 million.

Harmoney, which was the first licensed P2P lender in New Zealand, but which has dropped the P2P description of itself in favour of "online" following changes in the way it operates, reported a $7.22 million after-tax profit for the year to March 31,2019, compared with an after tax loss of $1.84 million a year ago.

During the 2019 financial year the company adopted International Financial Reporting Standard 15 (IFRS15) relating to revenue from contracts with customers.

Harmoney said IFRS 15 provides a principles-based approach for revenue recognition, "and introduces the concept of recognising revenue for performance obligations as they are satisfied".

"The Group has recognised the cumulative effect of initially applying the standard as an increase to the opening balance of retained earnings of $7.5m after tax. The increase is a result of recognising revenue for distributing services where the performance obligations had been fulfilled in prior years but revenue had not been recognised under NZ IAS 18."

Included in these calculations were tax losses of $4.85 million and deferred R&D expenses of $4.74 million.

Following the successful implementation of a securitisation programme, Harmoney's balance sheet has been transformed over the past financial year. Total assets stood at $65.51 million, up from $9.72 million the year before. The biggest component in the increase is the addition of $37 million of finance receivables, which have been funded by $37 million of borrowings.

Earlier this year Harmoney indicated it was looking for $25 million of new equity, which would include a new cornerstone shareholder. Major shareholders currently include founder Neil Roberts with just under 40%, Heartland Bank with slightly under 17% and Trade Me with a bit over 15%.

In releasing its financial results on Wednesday, Harmoney said only of this proposed capital raising that it is "also currently undertaking a capital raise which will further help grow the business in Australia".

Asked if there was any more detail to update on this, the company said in response: "Harmoney’s latest capital raise is progressing well and it is working with interested parties, seeking to raise a minimum of $20 million which will be used to further the platform’s growth into the Australian market.”

Roberts, who is joint CEO, said Harmoney Group had "disrupted the digital lending market in Australasia", having originated more than $1.2 billion in loan volume via 59,000 loans, across Australia and New Zealand. "The company marked $1bn in loans in New Zealand alone in February 2019 and hit the landmark of $100m in loans in Australia during the past financial year.

“That first $100 million is the hardest. To hit that mark in the highly competitive Australian market in less than two years is very satisfying, and proves our model is transferrable.”

In the notes to the accounts Harmoney refers to ongoing legal action instigated by the Commerce Commission and referring to Harmoney's original 'platform fee'. Harmoney says taking into consideration external legal advice, the proceedings are not expected to have a material effect on the reported results for the Group for the year ended 31 March 2019.

"The case stated proceedings were a test case to determine the threshold issue at law of whether the Platform Fee that Harmoney charges borrowers is subject to the Credit Contracts and Consumer Finance Act 2003. The High Court issued its judgement on 18 May 2018. The High Court judgement is that Harmoney is a creditor and the platform fee is a credit fee. Harmoney has sought to appeal the judgment to the Court of Appeal.

Good to see this platform is viable. Been making good returns with them.

Holy shit that’s fast growth in lending. Sorry ‘Asset growth’ - the claims on the website say average returns to investors (their lenders) are 13%.

The question is who the hell are they lending on to? Obviously not people who understand maths? Definitely not people the banks wanted to touch? Have Harmoney got a fast track system in place and great existing relationships to get through court and the MOJ claims process for handling delinquencies?

More investors required please...Why request $25 Million of investment when you have $1.2 billion of loans and are offering an average 13% return.. At those returns mom and pop lenders would be flocking to them like they did to Mr Madoff

I joined at the beginning of the venture to test it out and get an idea of how it works. I only had a small amount in there so I could get a feel for it and make some judgements. And after a few years of running the experiment and averaging about 15% return after bad debts, I've recently increased my investment with them and revised my investment strategy to a more cautious one with lower risk, as I feel we're staring down the barrel of another financial crisis, at which point, a lot of the debt will go bad.

You're right, I think a large number of the customers are not that financially smart, as so many of them also have mortgages which I imagine would be a far lower %. You do get to pick and choose which debt you invest in on a case by case basis. So you can decide if the borrowers are likely to pay it back. I think there are a large number of irresponsible loans in terms of the amount borrowed unsecured vs the incomes of the people or some other factor. But I don't have to invest in those.

The biggest worry is how much is being thrown at it by "institutional investors" who don't seem to be anyway near as discerning about the kind of debt they are buying. Every single loan that makes it to being offered to the investors gets funded, even though a lot of them don't look like good prospects. I also think the shadow banking sector in NZ is having an impact on stalling property price falls for longer than otherwise would have happened. It's giving people who are overleveraged the ability to drag out the inevitable and even make it worse in the long run. So many of the loans are for "home improvements", speech marks representing my skepticism.

The wheat and the chaff seem to go to institutional and retail investors respectively. It's a lot different to how it was a few years ago. I'm winding my harmoney account up.

I too have been reducing my holding,but only because it has been increasingly hard to find loans. I have been involved almost from the beginning. I invest only in A and B grade loans(80/20%) and my net return is 9.45%. I would happily have kept my total investment though it was only $18,000,while now it is down to around $5000. Perhaps they could launch a Mark 2 version,with loan capitalcoming only from individuals.

Hi Linklater. I'm disappointed too. I had a different strategy. Only lending to non house mortgage holders with grade D or above. I was attempting to make my loan book recession proof. Unfortunately I only managed to invest 10K, albeit with fantastic returns of 13%. It's just impossible to get money in there now. I moved over to Squirrel who're small fry by comparison with only 14 million in total loans. I automatically loaded 30k in the space of 2 months. I now own 0.2% of their whole squirrel loan book - ha ha. Returns lower at 6.5% but lower risk profile (I hope).