ANZ announces sale of asset financier UDC to Japan's Shinsei Bank, which says UDC will continue to grow and contribute to the development of the NZ economy

Banking
ANZ announces sale of asset financier UDC to Japan's Shinsei Bank, which says UDC will continue to grow and contribute to the development of the NZ economy

ANZ says the deal is subject to regulatory approval, with completion expected in the second half of the 2020 calendar year. The sale will release over NZ$2 billion of funding provided by ANZ to UDC, which the bank says will strengthen its balance sheet.

ANZ has been seeking to sell asset financier UDC for several years. In its annual results announcement late last October, ANZ NZ said it was again exploring a range of strategic options, including divestment, for UDC. This comes with ANZ having called off efforts to sell UDC a year earlier after a $660 million deal with Chinese conglomerate HNA Group was blocked by the Overseas Investment Office, which couldn't satisfy itself who actually owned HNA.

In 2017 ANZ Banking Group CEO Shayne Elliott told interest.co.nz ANZ was striving to develop a "simpler, better capitalised and more balanced bank," and whilst UDC was a good business, ANZ is not the best owner of it. On Tuesday the ANZ Banking Group pointed out the UDC sale will reduce the amount of common equity tier one capital ANZ will need to meet the new Reserve Bank of New Zealand (RBNZ) capital requirements by A$575 million. The increased capital requirements are currently on ice.

ANZ says Shinsei's purchase price represents a price-to-book ratio of 1.2x net tangible assets of $637 million as at March 31. The deal will require Overseas Investment Office approval. RBNZ approval will also be required if Shinsei wants to issue deposits to the public. Shinsei is listed on Japan's stock exchange.

“With a strong outlook for infrastructure and agriculture projects as the New Zealand economy rebuilds post-Covid-19, there is a significant role for UDC to play. As such, it needs an owner that can invest in and grow the business," ANZ NZ CEO Antonia Watson says.

Shinsei Bank Group is a diversified financial group with both banking and non-banking business divisions. It operates both asset financing and vehicle and consumer lending businesses similar to those of UDC in Japan and offshore.

"In the Covid-19 ‘new normal’, we are confident that UDC, as part of Shinsei Bank Group, will continue to grow and contribute to the development of the New Zealand economy and help people and businesses in New Zealand with their financial needs. Based on UDC’s long successful history, solid business base and efficient sales structure, UDC will be a major asset for the Shinsei Bank Group,” Kudo says.

A spokesman for Shinsei Bank told interest.co.nz the Japanese bank plans to use its "strong balance sheet" to fund UDC's lending.

"Shinsei Bank is a major diversified financial group with total assets of 10,226.5 billion yen, a deposit base of 6,305 billion yen, total equity of 910.4 billion yen, and a common equity tier 1 capital ratio of 11.3%, all as of 31 March 2020. The strong balance sheet of the Group will be used to support and grow UDC's lending in New Zealand," the Shinsei Bank spokesman said.

UDC's March half-year net profit after tax came in at $24.5 million, based on the table below provided by ANZ NZ. That's well down from $34.7 million in the 2019 March half-year. The table also notes a loss on sale for the bank post goodwill of $73 million. UDC has 227 staff.

The chart below was issued to the Australian Stock Exchange by the ANZ Banking Group. 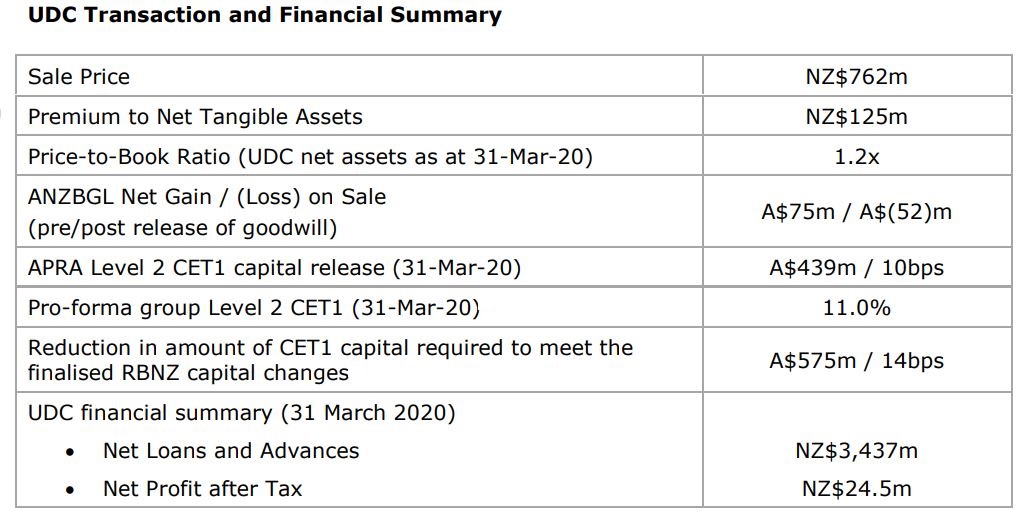 6.5% After-Tax Return p.a. might have looked attractive to the New Zealand equity market as a float, except for one thing - the words 'Finance Company' in the name, and that has scarred a generation of possible investors away from participation.
A good result for ANZ.

After Tax Return reflects the risk of the assets, which is backed by second hand equipment; and we know what the market for that is like in downtimes. From memory, didnt they want $900 million not that long ago.

Sale Proceeds should remain in NZ, to ensure the ANZ NZ branch is capitalised enough to weather the storm, from these otherwise fair weather sailors.

More so. While the label is asset finance, Equipment finance it's about being a cashflow lender. Leasing slugs know it's got nothing to do about the kit (unless you get inertia rentals), but the quality of the name & tax schedule.

A little about Shinsei Bank (I'm a customer). The bank represented the first move to bring a more Western style of customer-friendly retail banking to Japan after the restructuring of predecessor LTCB (Long-Term Credit Bank), which had a govt monoploy on long-term debt securutues. Things moved with a hiss and a roar and foreign residents of Japan liked the experience. Once some of the foreign leadership left, things seemed to go back to a more bureaucratic approach to service.

Shinsei is part of the SBI Group, which is one of the most supportive finanical institutions of innovating with cryptocurrency. SBI is now investing in Bitcoin mining technology and operations.