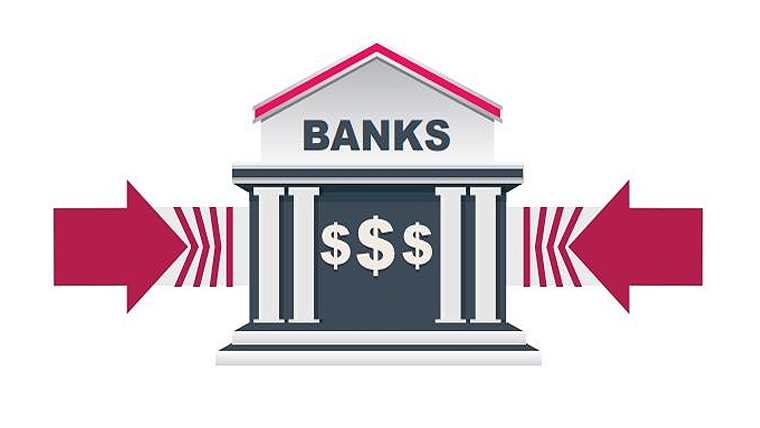 Helped by a $1.69 billion reversal in impaired asset expense, New Zealand's banks have posted combined annual profit of more than $6 billion for the first time.

The impaired asset expense reversal follows chunky loan provisioning from lenders in 2020 in the early days of the Covid-19 pandemic.

"This marks the first year in the [35-year] history of the survey that we have reported a net profit after tax of over $6 billion. This sharp increase is a bounce back from 2020, which saw a decrease of 28%, the largest decrease captured by the survey in the past 10 years and highlights the sectors' recovery from the initial shock of the Covid-19 pandemic," auditing and financial advisory firm KPMG says.

'Nearly everyone overestimated the negative impact the pandemic might have'

Having suggested in 2020 that some NZ banks' loan provisioning appeared to under estimate the true effects of the COVID-19 pandemic, KPMG now says with the benefit of hindsight, nearly everyone overestimated the negative impact the pandemic might have, resulting in excessive loan provisioning. KPMG is auditor to nine of the 20 banks in the FIPS including ANZ, TSB, SBS Bank, Heartland Bank and The Co-operative Bank.

KPMG argues that 2020 modellers were trying to predict the unknown. Under accounting standard IFRS-9, or International Financial Reporting Standard 9, banks must take into account expectations of future losses and economic conditions.

"The most significant factor in the record result for banks last year has been the reversing of provisions made in the prior year. When Covid-19 first struck New Zealand, banks were required to estimate the impact that it might have. As we look back now with the benefit of hindsight, it is apparent that nearly everyone overestimated the negative impact that the pandemic might have, resulting in provisioning levels that have subsequently not been required. A significant part of the banks’ record performance is due to a portion of those provisions being reversed," KPMG says.

"The provisioning models used by the banks were built during calmer economic times with a concise approach to variable moves and moves of a smaller nature. They were not built for sharp shocks in multiple directions. Through 2020 and 2021 there were some specific factors that could have contributed to the challenges in using forward-looking provisioning models," KPMG says.

"Firstly, there was the wage subsidy. Many loan holders require income to make repayments on their loans and although we saw a reduction in business being conducted during the March 2020 and June 2020 quarters due to the initial lockdown, the $13 billion printed by the Government and dispersed in the form of the wage subsidy meant that income remained more stable than many predictions."

"Provisioning models were not built to factor in the impact of this support which enabled people to service their loans despite not being able to work."

"Secondly, the banks lowered their interest rates following the decrease in the OCR to 0.25% in March 2020. However, lending to personal consumers slowed for a number of reasons including the lack of opportunity for consumer discretionary spending with travel off the agenda and the preference of banks to lend against housing to ensure some security on their loans. This spike in housing lending led to big increases in house prices resulting in increased equity while debt levels remained the same. This increases the loan holder’s net worth on paper as well as their loan-to-value ratio which provides the opportunity to extend their mortgage lending to service their other loans if they needed to," says KPMG.

"Thirdly, for those that were still not able to service their loans, the Government announced the mortgage deferral scheme. You can’t default on your home loan if you don’t have to pay it," KPMG says.

'Provisioning models are not perfect'

KPMG goes on to say that what has been learned from the spike in loan impairments in 2020 and the subsequent releases in 2021, is provisioning models aren't perfect.

"Many of the [bank] survey participants mentioned that the provisioning models have not worked as they would like, but that they are not designed to do what they have had to over the past two years and it is time that this was understood. Survey participants also noted that they were not prepared to release all the provisions written down until the long-tailed effects of Covid-19 are realised. Against this background, it is understood that many entities have retained a certain level of additional overlay for this unknown impact in the future rather than release all of the current indicated provisioning."

Ultimately KPMG says the sharp increase in provisioning reported by banks in 2020 due to Covid-19 concerns were, "with the benefit of hindsight, perhaps overcautious and largely unwarranted."

"One does have to remember the circumstances in early 2020 when financial institutions considered ‘black hat’ predictions across the board in their provisioning models and then applied well-reasoned overlays amid commentators talking about house prices dropping 15% to 20% and unemployment reaching double figures (10%). Now, with hindsight, we all know that this didn’t happen and while a lockdown will slow the economy down to a quarterly low point, there will be a bounce back that largely compensates this contraction in the following quarter," KPMG says.

"Throughout this period of Covid-19, the art of forecasting has been sorely tested. It would be a very brave person that tries to look forward in 2022 and 2023 and predict what is going to happen. Some things are certain though – there will be more uncertainty and we will all continue to encounter new experiences."

The FIPS covers registered NZ banks with reporting dates between 1 October 2020 and 30 September 2021. 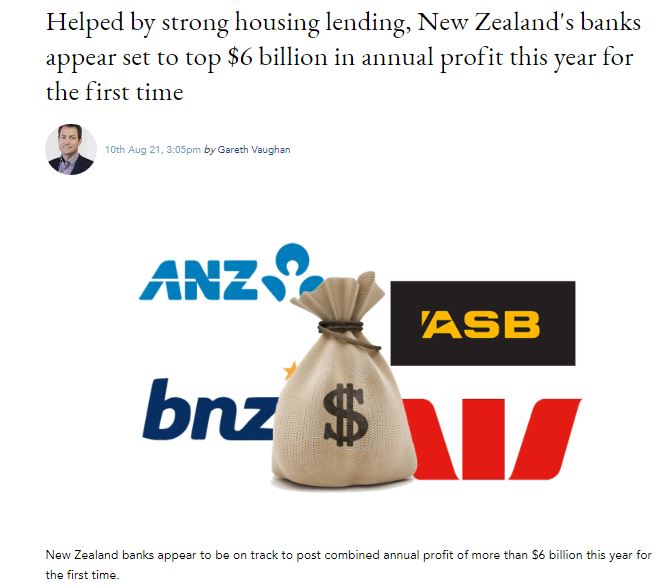 How much tax did they pay in $NZ

Banks are a vulture culture.

ANZ paid $2.7b in tax out of its $8.9B net profit. After the banks lost the structured finance case they are paying up (https://www.taxtechnical.ird.govt.nz/en/case-summaries/2009/structured-…).

How much is about to be passed across the Tasman to the Australian bank shareholders?

And what a wonderful business is banking for the existing players who can dominate the system.
KeithW

Makes a mockery of the mis-directed outrage at minimum wage increases with a cost of $700 million per year doesn't it?

Time to investigate the supermarkets lol

The fact is, the RBNZ and finance minister threw the kitchen sink at the problem when the banks complained that they were likely to have loan impairments that were pitiful, when compared to the stress testing that the RBNZ has performed on the banks.

The powers that be saw a mosquito on their wives foot, so picked up the sledge hammer and squashed it when the wife was perfectly capable of squashing it with their hand themselves. After breaking the foot as well as killing the mosquito, they administered large amounts of morphine to artificially keep the wife happy.  When the wife complains again about a sore foot, they know what to do now to fix the problem - more morphine and hope the underlying problem isn't noticed by the neighbours (citizens).  Then just rinse and repeat until divorce (election/resignation) when the wife will become someone elses problem.

Well let's be real, banks create their product (credit) "out of thin air" and they have a captured market psychologically with all the institutional might working for their interests.

Such outsized profits shouldn't be a surprise.

They can print their profit and work backwards from there.

With a little hard work and a few blank cheques, we should be able to get that $6b profit to $8b in no time!

Strong Banks are the back bone of a Strong Economy. Right ?