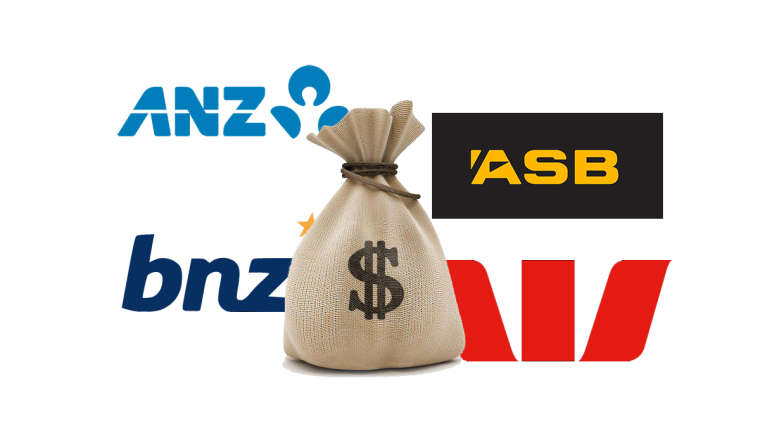 New Zealand banks appear to be on track to post combined annual profit of more than $6 billion this year for the first time.

Based on figures from KPMG's annual Financial Institutions Performance Survey (FIPS), the banking sector's record annual net profit after tax weighed in at $5.77 billion in the year to September 30, 2018.

Combined December 2020 quarter and March 2021 quarter profit came in at $3.004 billion as banks wrote record volumes of home loans and started writing back credit impairments booked at the onset of the COVID-19 pandemic. Doubling that half-year profit figure would take banks' September 2021 year profit above $6 billion.

Over the 20 years since 2001 bank profits have only suffered two significant dips. The first came in 2009 when they were hit by the double whammy of $2.2 billion worth of structured finance transaction tax settlements with the Inland Revenue Department, and loan impairments booked during the Global Financial Crisis. The second occurred last year as impairments were booked as COVID-19 took its grip on the world. Both significant downturns proved short lived with impairments written back, and a return to a hot housing market where NZ banks do the majority of their lending.

In fact the COVID-era housing market surge has seen housing lending as a total share of bank lending increase. ANZ NZ, the country's biggest bank, had 69% of its total lending in housing at March 31, up from 64% at March 31, 2020.

Against the backdrop of low interest rates and with banks incentivised to lend against property because they're required to hold less capital against housing lending than other forms of loans, Reserve Bank data shows more than $50 billion of mortgages were taken out in first half of 2021.

The chart at the foot of this article maps bank profits over 20 years against house prices based on Real Estate Institute of New Zealand national median prices. At the start of that 20 year period five banks dominated NZ banking being ANZ, ASB, BNZ, the National Bank and Westpac. Following ANZ's 2003 acquisition of the National Bank, it has been the four Australian owned banks ever since. As of March 31, ANZ, ASB, BNZ and Westpac between them, held 88% of NZ banking system assets.

ASB's due to post annual financial results on Wednesday. After recording its first fall in annual profit in a decade last year, a strong bounce back is expected. 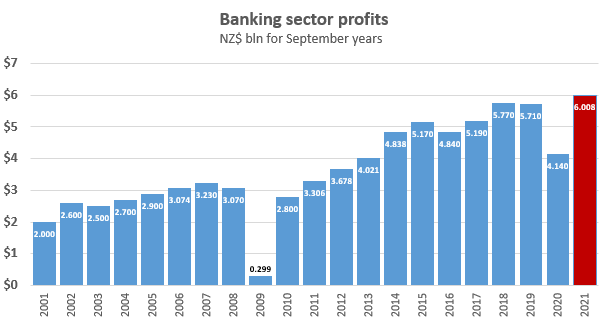 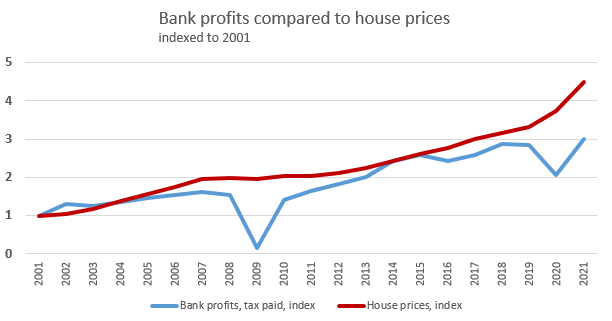 Why is there no nobody campaigning on interest rates control on banks?

Where are the social justice warriors who love campaigning on rates control on housing, rents and OCR? What happened to the "I love taxes" special interest group?

With some action taken on fuel prices, and now grocery under the microscope, electricity and bank profits can't be far behind. Whether anything effective comes out of it is the bigger question

Kiwibank was doing well but has lost momentum in recent years with more mixed results.

Don't think you need worry..."whether anything effective comes out of it". Certainly not with the electricity generators, many of which are majority state owned. I doubt the gummit wants to trim back the dividends they receive!
But, hey, we have been down this path before, rent controls, price controls, etc.. We ended up with inspectors touring shirt manufacturers to make sure they weren't putting too many buttons on. And you may remember the egg inspectors checking hen houses to ensure the wicked owners didn't have more than the specified number of chooks!
All "Polish shipyard" stuff and our Dear Leader rather thinks that the best way to head.

Do you not think the actual sum borrowed has something to do with the banks profitability it is afterall quite high ?

Yes, any action to bring house prices down would be a good step to stopping the bleeding of money to Australia.

An easier step we can all take is to give our business to the local banks. I have a mortgage with Kiwibank and my emergency fund is with Heartland, both do a perfectly good job for me. If money starts to drain away from the Aussie banks they will soon improve their offering.

Where are the social justice warriors who love campaigning on rates control on housing, rents and OCR?

Dude, they are out there begging for free-money, state subsidies and hate-speech-laws. Wellington City Council has their hand out for $100 million. The SJWs (Social Justice Warriors) are making the economic and social problems worse.

Now, if/when the subsidies fail and tougher hate-speech-laws come in - SJWs will protest on the streets, but it will be too late, with the goose having already been proverbially cooked. The state will then come down hard on these now homeless, broke, protesting fools. Don't get involved with such people.

Looking at the graph, this is not a new or Labour-specific problem, although it certainly hasn't been addressed by them as yet.

It's just a bit of extra rain.

Anyone not believing in climate change is an idiot. No need to worry about it tho just get some 100 sunblock and an inflatable boat.

Forgot Ripped off by the Gov - unless one's income comes from housing ponzi.

To be honest, I don't think the banks should be blamed for this. This is a by-product of house price inflation. Remember that banks make a margin on the interest rates, not the whole rate. And they're not the sole architects of the amount of said rates. There's a number of factors, such as OCR, overseas and wholesale funding as well as "retail" rates on TDs and savings accounts.

Kiwis have a cultural obsession with housing, especially for investment reasons. If they snapped out of the trance and looked at the cost/benefit compared with other investments, then that would change. In fact, it already is changing. And the demand for housing is exacerbated by rates being so low - but that's at the courtesy of the Reserve Bank, due to the crude targets they've been set by successive governments.

Well sudden drops in banking charges just recently , it not just housing its everyday fees and most of profits until the govt stepped in went offshore
We have a bank that charges $12.00 per month and when you go that bank they get you to use the cashflow to deposit money

The government stepped in? When, and what did they do?

Obscene. By default, the most privileged industry in NZ and the Anglosphere is able to create its own product from thin air and ultimately not be responsible for the mess if (or when) it all goes tits up.

And they are going hard spruiking up the need to raise rates more.
Evil greedies.

Their profits have nothing to do with raising rates. They simply make money from the differential between lending and borrowing multiplied by the total lending. Its a great business, you simply adjust the numbers and change your profits at the press of a button. You would have to also factor in more lending is more risk so you would want to make more profit. Total lending has gone through the roof so profits will follow. No point getting upset, NZ was stupid in selling off all the major banks years ago. NZ has been slowly going backwards for a very long time, its so slow that you hardly notice it until you wake up 30 years later and remember all the good things "back then".

Should have kept my job in the bank. Bonus this/next year would have been good.

In all seriousness, NZ is out of control.

Parasites.
I could understand if they actually provided a service, but really they add nothing but take in enormous quantity.

We should be happy we are making our neighbor prosper, let's keep chipping in by exchanging houses among ourselves. Of course our govt will help to keep the show going now it cannot fail.

Can we really say they are Australian owned.

Being on the ASX shareholders must be majority owned by fund managers around the world.

The Management is mostly by Aussies, right ? They take decisions on their NZ subsidiaries businesses. So they control the banking here. Financial ownership is different, the Funds Managers and Overseas owners may be looking only at capital and dividend growth. What the Management Team decides affects banking here in NZ.

It's only 5K for a family of four. Not worth talking about.

Bring on them dividends!

It's a government backed industry. They can do anything they want really. They never have to fear going under or anything.

Now, this makes sense why Westpac backed out of putting the Bank up for sale?

Fractional reserve banking at its best. Create $ out of thin air. Somehow be allowed to charge interest on it. Even more amazing, get upset when a lender does not pay this made up money back.. Money for old rope.. Really is a Licence to print money.