"New Zealand continued its recent strong performance with record lending growth combined with disciplined cost management. This is a well run business that is an important part of our overall portfolio and is well placed to manage increased regulatory capital demands," Elliott said.

ANZ NZ CEO Antonia Watson told interest.co.nz she took Elliott's comments "as a vote of support," and was unaware of any suggestion the ANZ Group might want to follow Westpac and review the ownership of its Kiwi unit. Watson noted that ANZ NZ contributes between 25% and 30% of ANZ Group profit. That makes it a significantly bigger contributor to group profit than Westpac NZ, ASB to its parent Commonwealth Bank of Australia, or BNZ to the National Australia Bank.

"It's in everyone's interests for residential property prices to be sustainable long term, and for home ownership to be accessible to as many people as possible," Watson said.

Figures released by the ANZ Group show ANZ's NZ home loan market share at March 31 was down 10 basis points year-on-year at 30.6%, with total home lending at $95 billion. Housing grew as a share of ANZ's total NZ geography lending to 69% at March 31 from 64% a year earlier.

Meanwhile, Watson said the full impact of COVID-19 on the NZ economy is yet to play out, although sectors like housing, construction and agriculture have proven resilient.

"Across the economy, businesses have generally fared better than we expected so we've been able to release around 25% of the additional credit provisions we had put in place since the start of the pandemic," Watson said.

"While there's room for optimism, we also know the impact on the economy is uneven."

"Sectors that relied on overseas visitors, such as education, hospitality and tourism, have been disproportionately affected and we've seen first-hand the challenges facing our customers in those industries," Watson said.

"As we look ahead, a full recovery is still some way off. Economic confidence will take time to be restored as residual impacts of the pandemic are felt."

At March 31 ANZ NZ's total capital ratio, as a percentage of risk weighted assets, was 15.9%. That's up from 14.4% at September 30 last year. The Reserve Bank's new regulatory capital requirements, being phased in over seven years from July next year, mean ANZ NZ will require a total capital ratio of 18%. ANZ NZ isn't paying an interim dividend to its Aussie parent.

Figures released by the ANZ Group show the net interest margin for its NZ division at 2.32% in the March half, up one basis point year-on-year. The NZ division cost-to-income ratio was down 340 basis points to 38.3%.

The chart below from the ANZ Group shows movements in ANZ NZ deposits. 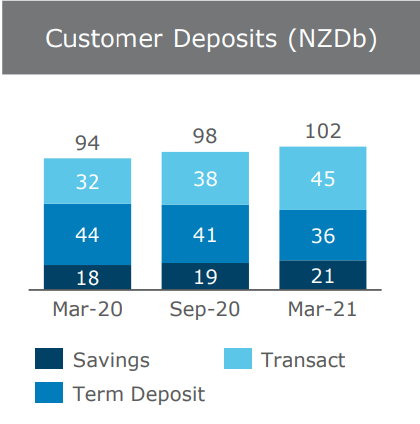 ANZ NZ CEO Antonia Watson said the cost reduction was due to lower personal costs, a series of "simplification initiatives,"...

Did Henry Ford famously pay his employees enough to purchase the product they were manufacturing?

Banks reaping big profits....they will be going "yeeeeehaaaaa!!"
And if it all goes belly-up, we'll have to bail them out. 'Too Big To Fail'.
How good is moral hazard!!??!!
'Privatize the profits, socialize the losses'.