Three of New Zealand's big four banks load up on a combined €2.450 billion worth of covered bonds

Three of New Zealand's big four banks load up on a combined €2.450 billion worth of covered bonds 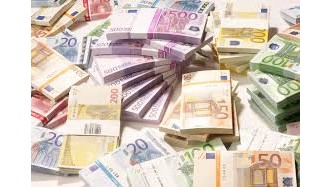 ASB, BNZ and Westpac have filled their boots with new covered bond issues, borrowing a combined €2.450 billion (about NZ$4.15 billion).

First up was ASB borrowing €750 million through a 10-year issue. ASB's order book topped €1.1 billion, with the issue ultimately having a coupon of 0.25%.

Westpac borrowed €850 million through a seven-year issue. Its order book reached more than €950 million, and it is paying an annual coupon of just 0.01%.

And in its own seven-year issue BNZ is also borrowing €850 million. BNZ's order book reached €1.2 billion, and its issue also has an annual coupon of 0.01%.

All three issues priced at 12 or 13 basis points above the euro swap curve. ASB's covered bond yields more because it's a 10-year issue, and the swap rate curve steepens between seven and 10 years.

Whilst the covered bonds are priced cheaply, the New Zealand banks' costs will also include hedging costs to swap the money borrowed into the Kiwi dollar. One suggestion put to interest.co.nz is that the NZ dollar cost could be about 50 to 60 basis points over the bank bill benchmark rate (BKBM).

Should a bank issuer fail, covered bondholders, in the form of institutional investors predominantly located overseas, would be at the front of the queue to be repaid ahead of depositors and holders of other secured bonds. The Reserve Bank gave NZ banks the green light to start issuing covered bonds in 2010. The Reserve Bank says banks may use up to 10% of their total assets as security for the benefit of covered bondholders.

The four Australian owned banks must factor Australian Prudential Regulation Authority (APRA) rules affecting funding from their parents into their covered bond planning.  APRA says only covered bonds meet its criteria for contingent funding arrangements provided by the Australian parents to their Kiwi subsidiaries during times of financial stress.

There's more from the Reserve Bank on covered bonds here and here, and a public register of NZ banks' covered bond programmes here.

This story has been updated correcting the coupon on the BNZ and Westpac issues to 0.01% rather than 0.1%.

Remove the bank right to place a lien on residential property when a signed mortgage agreement is purchased for said collateral and most of the asset price dislocations we witness would be extinguished.

Yep, the covered bond is the good bank. You can just see it slipping over the horizon..... and its gone!

As sure as you think you are, issuance actually follows house prices, not the other way round. 'dislocations' are not caused by lending. There is statistical proof if you go looking for it, or just keep spouting the same dogma.

.. the most important macroeconomic variable cannot be the price of money. Instead, it is its quantity. Is the quantity of money rationed by the demand or supply side? Asked differently, what is larger – the demand for money or its supply? Since money – and this includes bank money – is so useful, there is always some demand for it by someone. As a result, the short side is always the supply of money and credit. Banks ration credit even at the best of times in order to ensure that borrowers with sensible investment projects stay among the loan applicants – if rates are raised to equilibrate demand and supply, the resulting interest rate would be so high that only speculative projects would remain and banks’ loan portfolios would be too risky. https://professorwerner.org/blog/

These bonds are pure evil.
Its interesting that they seem to be favored above funding for lending, Not sure why.
Anyway it is instructive how the banks carved out the non performing properties which were in the cover pool in Chch after the EQ. I would have thought that if they were in the pool then they should have stayed in the pool alas.... self interest came to the fore. Shareholders/ the govt/ deposit holders came a distant.... 3rd/ 4th/ 5th?

May have something to do with the duration and coupon rates.....however I too thought it odd they should be preferred over FFL.