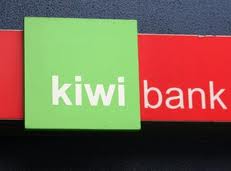 Fitch Ratings has assigned an AA credit rating to Kiwibank, which is one notch higher than the AA- ratings it has on New Zealand's big four Australian owned banks, and says the state owned bank plans to issue covered bonds as it becomes more reliant on wholesale funding.

Fitch says the rating reflects its view of an "extremely high probability of support" from Kiwibank's parent New Zealand Post, which is a State Owned Enterprise.

In February Fitch downgraded its ratings on ASB, BNZ and Westpac NZ to AA- from AA  saying their reliance on overseas wholesale funding left them "susceptible to dislocation" in international wholesale funding markets. The downgrades brought the three in line with Fitch's existing, unchanged AA- rating on ANZ NZ. Fitch estimated wholesale funding comprised about 40% of total funding for the big four (excluding derivatives), with the offshore component of wholesale funding about 60% of the total.

In its interim results briefing in February Kiwibank said it was 87% funded through customer deposits. However,  Kiwibank did establish a commercial paper programme denominated in euros in late 2010. Now Fitch says the bank is planning to issue covered bonds, noting Kiwibank's strong lending growth has topped its deposit growth over the past three years. Through its recent 4.99% one-year fixed-term home loan special alone, Kiwibank says it lent more than NZ$200 million.

"Its strong loan growth has outpaced deposit growth over the past three years, making the bank more reliant on wholesale funding markets and, consequently, weakening its funding mix," Fitch says.

"In response, the bank has emphasised deposit growth to fund future loan growth, which should help stabilise its funding mix. In addition, the bank plans to use covered bonds to help lengthen its funding maturity profile. All of Kiwibank's unsecured senior debt (including deposits) benefit from an explicit, unlimited guarantee from NZ Post, except where a payment obligation is expressly excluded from the guarantee," credit rating agency adds.

A Kiwibank spokesman told interest.co.nz the bank was "keeping all funding options open" but hadn't made any decision in relation to covered bonds.

Covered bonds are dual-recourse securities, typically issued for between five and 10 years, through which bond holders both have an unsecured claim on the issuing bank and hold a secured interest over a specific pool of assets, called the cover pool. Covered bonds are different to senior unsecured debt instruments issued by banks, where the bond holder is simply an unsecured creditor of the bank, and also from mortgage-backed securities, where the bond holder holds a secured interest in the cover pool but has no claim on the issuing bank.

Due to their dual recourse security, covered bonds generally attract the highest possible AAA credit rating and are therefore a cheaper form of funding for banks than standard bank bonds. The big four banks have borrowed about NZ$9.2 billion between them through issuing covered bonds since they began doing so in 2010. See more on covered bonds here.

In contrast to Fitch, Standard & Poor's has AA- ratings on the big four banks and Kiwibank, although Kiwibank's rating has a negative outlook with ANZ, ASB, BNZ and Westpac on a stable outlook.

Fitch Ratings-Sydney-13 June 2012: Fitch Ratings has assigned Kiwibank Limited's (Kiwibank) Long- and Short-Term Foreign Currency Issuer Default Ratings (IDRs) of 'AA' and 'F1+' respectively. At the same time, Fitch has assigned the bank a Viability Rating of 'bbb-', and a Support Rating of '1'. The Outlook on the Long-Term IDR is Stable. A full list of all ratings is listed below.

The IDRs and the Support Rating reflect Fitch's view of an extremely high probability of support from its parent, the New Zealand Post Limited (NZ Post). NZ Post is a wholly state-owned enterprise of the New Zealand sovereign (rated 'AA'/Stable/'F1+'). Any change in NZ Post's ability and/or willingness to provide support is likely to be reflected in Kiwibank's ratings.

Kiwibank, which was set up in 2001, has experienced significant growth since its foundation. Despite the economic challenges of the past four years, the bank's loan book has consistently grown ahead of the domestic banking system. Although Kiwibank's current asset quality is sound, Fitch views fast growth as a potential risk to the bank's future asset quality performance, profitability and capitalisation.

In addition, the bank plans to use covered bonds to help lengthen its funding maturity profile. All of Kiwibank's unsecured senior debt (including deposits) benefit from an explicit, unlimited guarantee from NZ Post, except where a payment obligation is expressly excluded from the guarantee.

Kiwibank is the fifth-largest bank by assets in New Zealand. At end-December 2011, its market share in the deposit and loan market was 5%, which is still low relative to its larger Australian-owned peers.

Fitch says the rating reflects its view of an "extremely high probability of support" from Kiwibank's parent New Zealand Post, which is a State Owned Enterprise.

raf was right about opening an account at Kiwibank, only problem is that we all pay in the "unlikely", but nonetheless increasingly likely, probable default.

i think that name is spelt FILTCH...ooops.

Let's not forget that it is only a very short time ago that Fitch rated the Gov't bonds of Greece and other European nations at AAA, the highest rating, because they were supposedly backed by their respective Gov'ts.  It's also worth remembering that they were late in downgrading these same Gov't bonds, well after the financial markets had sent their interest rates through the roof.   Whoever pays these Ratings Agencies must be really dumb or money to waste.  In fact why do we bother with them at all.

In fact why do we bother with them at all.

Good point - because the firm that adopted an 'early warning' mode of operation got put in the dock.by the SEC. Not without a fight though.

I still don't know why Kiwisaver funds aren't being diverted here recapitalizing and renationalizing our banking system. Frankly the investment returns from all of my Kiwisaver accounts are so shit I would be happy to forgo divs for 20 years, just to see kiwibank taking sizable market share off the incumbents

Can someone please tell Michael Laws? And all the other nay-sayers..? Can't blame him, though, really. When he was taking the mickey out of Kiwibank the biggest company in the world according to assets was the Royal Bank Of Scotland. Now nationalised.