English says Government has room to loosen fiscal policy if hard landing in China increases risk of recession; also says RBNZ has much more room to cut given OCR is at 3%

Bonds
English says Government has room to loosen fiscal policy if hard landing in China increases risk of recession; also says RBNZ has much more room to cut given OCR is at 3% 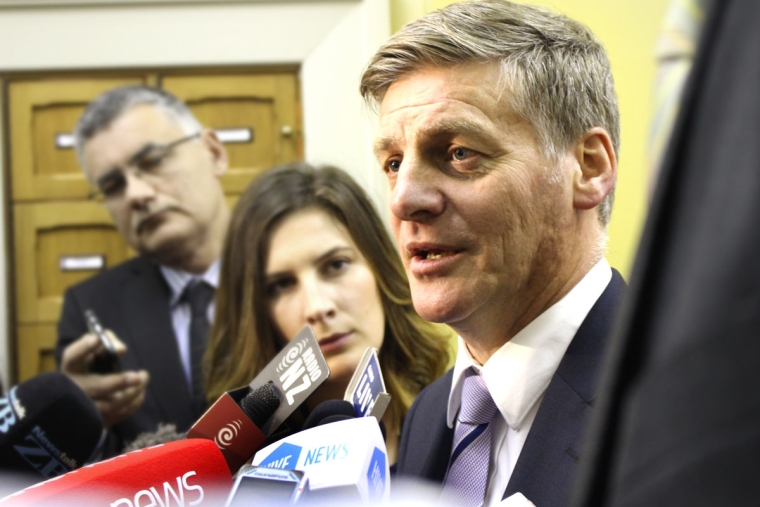 Finance Minister Bill English has given his strongest indication yet that the Government would loosen fiscal policy to prevent a recession if China's economic slowdown turned into a hard landing.

English said it was too early to say if China was experiencing a hard landing, but it was possible as China's local Governments grapple with crippling debts and the central Government in China tries to reorient the economy away from infrastructure investment and towards consumption and services.

English said the chances of a recession were still small and the Government was not ready to loosen the purse strings yet, but it did have the capacity if necessary.

"The possibility of a recession is small, but if we had a hard landing in China it would rise," English said in this interview on Morning Report.

"A harder landing for China is possible and it would affect our growth prospects if it occurred, but we're yet to see whether it happens," he said.

"If the outlook changes significantly then we've got room to make changes and more room than most other economies," he said, pointing to the OCR being at 3% while other economies such as Canada had official rates closer to 0%.

"And because the Government books are in reasonable order we have the opportunity there to take a more relaxed view of Government spending if the economy really turned down, but fluctuations in financial markets isn't enough to warrant changing the current strategy, but a hard landing in China might be."

English's comments were stronger than he made yesterday about the prospects for a 'Plan B' in response to a global slowdown.

They were also stronger than those of Prime Minister John Key yesterday, who said he was confident the automatic stabilisers of a lower exchange rate and lower interest rates would be enough to prevent recession.

English's comments came after another 7.6% fall in stocks in Shanghai and after the People's Bank of China cut its benchmark interest rate overnight by 0.25% to 4.6% and reduced its Reserve Ratio Requirement (RRR) for most banks by 50 basis points to 18%. ANZ Economists have said the RRR cut could inject 650 billion yuan or US$101 billion in new loans into the economy.

Various media in China reported the 'national team' of state-backed brokers and funds had stopped supporting the stock market, although China was continuing to prop up its currency. Jamil Anderlini in Beijing reported the 'national team' capitulated to stock market forces on Monday after spending US$200 billion and were letting the market fall, while the PBOC had spent US$200 billion to support the renminbi after its shock depreciation on August 11 and was continuing to do so at a rate of US$10 billion a day.

This would explain why China's stock market kept falling yesterday, but other markets around the Asia Pacific, Europe and the United States rebounded despite the Chinese fall. News of China's latest monetary policy easing also helped, although the Dow tumbled more than 200 points as it closed this morning.

There is also growing talk in the United States that the US Federal Reserve will not be able to start raising interest rates next month, as was once widely forecast. Former US Treasury Secretary Larry Summers and hedge fund maestro Ray Dalio even said the US Federal Reserve would have to restart Quantitative Easing or money printing.

ANZ Economists have said the RRR cut could inject 650 billion yuan or US$101 billion in new loans into the economy.

PBOC had spent US$200 billion to support the renminbi after its shock depreciation on August 11 and was continuing to do so at a rate of US$10 billion a day.

Logically, it takes ~10 business days to sterilise the liquidity created by the RRR reduction. Thus no new loans - right?

Send a reporter down to Barfoots auction rooms this arvo and see if the Chinese are still in property frenzy mode. Expect that at least half will recieve no bids or not reach level owners want.

No that did not happen, most properties sold again.

."And because the Government books are in reasonable order ....''

That will be because the government has been running a surplus for the past few year then?

Oh no. They didn't quite get there did they. Five years of positive economic growth and yet they never managed to get to the promised surplus.........

I think its a mistake to think that economic growth and surpluses are the same thing.

Consider the counter position - how often do you see governments running a surplus during a recession?

If a government can't get to a surplus at any stage during a phase of economic growth that has lasted 5 years plus then God help them in a downturn.

Are we going to have our own QE here in New Zealand soon ?
Lower interest rates and free money. Will this be part of TPP also ?

so yes then he will have forgotten he said it

Who in their right mind is going to borrow $101 billion in "new loans" right at this moment?

"Who in their right mind is going to borrow $101 billion in "new loans" right at this moment?"

So we should consider it fiat compliat that NZ gov will do so, then...

Quest of the Holy Grail

Parzival leaves the castle, to begin his quest ....

The gate was open and the drawbridge down. He galloped across, but when he got to the end of the drawbridge, someone yanked the cable so abruptly that Parzival was nearly thrown, horse and all, into the moat. Parzival turned back to see who had done this to him. There standing in the open gateway was the page who had pulled the cable, shaking his fist at Parzival. "May God damn the light that falls upon your path!" the boy cried. "You fool! You wretched fool! Why didn't you ask the question?".

"What do you mean? .. Question?" Parzival shouted back at the page. "What question?"

"Room to fiscally loosen." Stupid That's like when you lose your job. And go and get a bigger limit on your credit card. Saves your lifestyle !!

With a sovereign currency, no its not the same as a household spending. The most wasteful thing would be to have high unemployment because monetary and fiscal policies were too tight. Bill English in this case is correct. We preferably would not be significantly borrowing offshore to fund any such spending, and most certainly not borrowing in any one else's currency. My understanding is that at a government level all borrowing is in NZD which is relatively low risk.
Whether the economy yet justifies such measures we will likely know in the next 3-6 months.

Disagree, once you drop interest rates too low you enter the same hole the rest of the world is struggling to climb out of. There seems to be a popular belief in the world that low interest rates and money printing is good for the economy. My opinion is it's a symptom of economic failure. The US recognises that they need to get interest rate rises happening, and the low rates are hurting the economy. There is an optimal interest rate for economic growth and countries like the US with zero rates suffer a lack of investment .

The last sentence is almost like you put up a collection of words while missing so much.

Lack of investment is due to the would be investors/business seeing a lack of demand and hence not investing. Even with record low interest if there is no one buying you dont borrow to increase capacity unless there is a strong possibility by the time the plant is in place there will be demand.

There probably is indeed an optimal growth rate that doesn't cause an economy to over-heat to fast, about 4% seems the ball park figure. The interest rate then needs to be balanced to not let the growth rate climb too fast or whither.

Few it seems are taking on board the (high) cost of energy into an economy, too high and that like an excessive interest rate cripples growth.

So with energy too expensive and massive debt the only tool left is very low interest rates for the foreseeable future.

These policies aren't working. They are desperate measures that are design to combat a crisis. It was massive stimulus spending by China since 2008 that created a boom which has put the world in trouble, which we and the Chinese are going to respond to with more stimulus measures. If you can borrow money cheap why invest in a real business?, when there is much more money to be made chasing bubbles. Here's an interesting interview with alan Greenspan titled "Alan Greenspan on Central Banks, Stagnation, and Gold" https://www.youtube.com/watch?v=_mmL8X_2Ces

its not so much about people not buying, it's about being able to product "something" at a cheap enough price, while paying good wages, at a low enough cost structure. I know it's an ancient cliche but it's true.

Not demand...at this price.
But if I can produce something new and consumer, cheaply enough, and hire people to produce it, my economy will grow. It's when my price of production rises that supply price hardens and the demand dries up.

"With a sovereign currency, no its not the same as a household spending."

Go on, keep saying it, because no-one has proved it yet, so repetition of the falsehood is the only "truth" about that statement that keeps it wiggling

Saying something nine times by officials fixes it in people's minds and then begins to be believed wholesale. Proven govt strategy. See govt statements on TPP.

Is fiscal loosening anything like bowel loosening, something that happens when you have the sh.. scared out of you?

Looking forward to the sub 4% mortgage rates - who will be first bank to offer it?

I am expecting more currency volatility and hence extended lender resistance to be associated with it - particularly uncaptured foreign wholesale creditors.

This week’s global market rout, led by China, has also widened bid-ask spreads in currencies, making them harder to trade. The difference between bids and offers on New Zealand’s dollar swelled to 2 U.S. cents Monday, when the kiwi had its biggest intraday drop in 30 years. Read more

.
how dare they, managing the finances in a responsible way....