The Govt’s target of getting net Crown debt down to 20% of GDP by 2022 has been questioned, but Finance Minister Grant Robertson is not budging from his commitment

Bonds
The Govt’s target of getting net Crown debt down to 20% of GDP by 2022 has been questioned, but Finance Minister Grant Robertson is not budging from his commitment

Finance Minister Grant Robertson is defending the Government’s decision to slash Crown debt at a time when borrowing money is historically cheap.

“To give future generations more options, reducing government debt has to be a priority,” Labour’s pre-election fiscal responsibility rules say.

The target has copped flak from some economists who say the Government should be borrowing more while interest rates are low and debt is so cheap.

“My view [is that] the last decade has been the best time to borrow money – money is cheap and everyone is looking to lend you money,” he said last month at the unveiling of the Government's Housing Stocktake Report.

“You’re a fiscal idiot if you don’t borrow money when interest rates are at the lowest level in a century.”

Eaqub went as far as calling the Government’s commitment to lower debt “a fiscal straightjacket.”

“New Zealand is a small, advanced economy but we are prone to external shocks and, indeed as we have seen in recent years, internal ones in terms of earthquakes.

“So, we need, as a small country, to be very prudent with our debt levels.”

Following the Global Financial Crisis in 2008 and the Christchurch earthquakes in 2011, net Crown debt jumped from 5% to 25%.

Robertson says one of the main reasons the economy got through both shocks was because of the low levels of Crown debt achieved under the previous Labour Government.

Credit ratings agencies, such as S&P and Moody’s, assess a country’s credit risk in part on its Government’s debt levels. 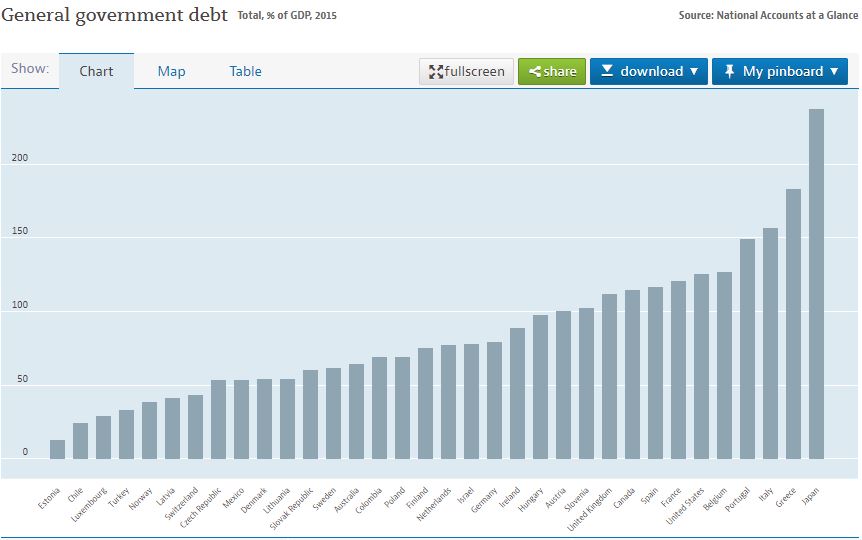 New Zealand sovereign debt is much lower than most other OECD countries. The UK’s public debt is 112% of its GDP, the US is at 125% and Japan is at a whopping 237%, according to OECD figures.

Robertson admits that an extra 1% or 2% wouldn’t make much difference to the rating agencies assessment of New Zealand.

“But the track, the target and the goal are important to those rating agencies to be able to see we have a plan. It’s a balance between meeting the important social and infrastructure needs of the country and managing our finances responsibly.”

He says the debt reduction path is slower than the previous Government’s which means issues like funding for infrastructure can still be addressed.

Labour’s fiscal responsibility rules say in the event of an economic shock, the Government can take on more debt to cope with any fiscal pressures.

But it does not put a limit on how much debt the Government could take on and Robertson is reluctant to commit to a figure.

“I don’t want to put a number on that – it’s really just an acknowledgement that we made when we announced the budget responsibility rules that from time to time, things are going to happen in the economy that means you have to take another look.

No plans for deposit insurance

Meanwhile, Roberson has essentially ruled out exploring any work on introducing bank deposit insurance. Both the Green Party and New Zealand First were keen on the idea before the election but it did not make it into the Government’s Coalition or Confidence and Supply Agreements.

This is despite the International Monetary Fund (IMF) last year saying the introduction of deposit insurance would strengthen New Zealand’s financial safety net and complement the Reserve Bank's Open Bank Resolution framework, which potentially protects taxpayers from having to bail out a bank if it goes under.

“We don’t have work underway in those areas at the moment,” Robertson says.

“Obviously, the individual parties will continue to hold their views – but that’s not part of the agreement we signed.”

Asked if it’s something that could be looked at in the future, he says it’s “certainly not on my current work plan.”

The government saving excessively for a rainy day - given the high indebtedness of the private sector in NZ - will itself provoke the rainy day.

Cullen got away with it from the massive expansion of private debt in the 2000s.

This time households can't do that. We're at peak debt.

Is the Government on the right track with its debt target? I think the answer is No! A good discussion was had in in this interest article.

So, Shamubeel reckons only idiots don’t borrow at interest rates at century lows. If he had studied any economic history then he’d know that interest rates haven’t been this low in the last 5,000yrs, but let’s not quibble about that. There is a very high likelihood (probably greater than 75%) that interest rates will double in the next 3yrs. When disposable income goes negative and the govts tax take tanks, then the muppets in govt will respond with more taxes to keep this socialist experiment afloat, and so the downward spiral will accelerate. No doubt, genius economists like Shamubeel will be shocked and blame anyone/anything but themselves for this unholy mess. History will not judge their arrogance and incompetence in a favourable light...

We’ve only had about 47 years of financialisation and the interest rate trend has been consistently downward. Unless the world experiences de-financialisation, it seems unlikely that rates will increase. When disposable income tanks the government will increase deficit spending to stimulate the economy. Increased taxes just suck money out of the economy.

Where is the inflation and growth that would cause interest rates to rise? Nowhere to be seen. The elusive inflation that we all fear but never seems to appear. 12% under-employment is why it never appears.

But that is beside the point.

Government does not need to tax more to pay off debt or to deficit spend. Look at Japan. The central bank buys the debt. Overt monetary finance. That is the polite term.

And it works and is not inflationary - as long as your economy is full of under-utilized capacity or suffering from a huge paying down of private debt.

The whole " we need to get public debt down" for our grandchildren is nonsense. All we do in that case is load them up with private debt. Which is what Cullen did in his prior reign.

No inflation? Really??? Have you looked at house prices, commodity prices, or share prices lately?

This advocating of fiscal irresponsibility will not result in a benign future. The private debt increase is wholly due to the reduction of carrying cost for a fixed amount of debt. The tendency is to borrow until ones capability to pay meets the carrying cost. This is high risk as any interest rate increase, income reduction, or unexpected costs result in a calamity. Prudence should still be a virtue, and "economists" such as Shamu should be put in the same dustbin as Greenspan, who didn't see the GFC coming but set into play all of the required predecessors.

The shit will hit the fan after a major economic event overseas and we suddenly have to repay the Piper.

5000 years.? Not quite. I started work in a trading bank in the early 1960’s. Term deposits were known as IBD’s. recall the rate for 3 years was 3.25%.Was unchanged at that for near enough to five years. The other four trading banks were exactly the same. The majority of depositors were farmers. In those days a bale of wool was worth virtually a new car. 1 pound sterling was worth 2.1492 NZ pound and 1 US$ = 7/6d. So how relevant is history?

No not in your wildest dreams. Everything chugged complacently along, Holyoake, Kirk, Muldoon. Sure there was the oil crisis & some housing price spurts, devaluations & Springbok tours. Then came Roger Douglas!

Asset price inflation yes, CPI and wage inflation no.
Low OCR/QE inflates asset prices. No argument there. Does it get aggregate demand in the real economy going via trickling down and increasing investment and consumer spending? Not really. Not much. Not enough. That is where government spending needs to step in.
Public debt is fundamentally different to private debt.
Households can be insolvent. Sovereign currency issuing governments cannot.

But let's run even bigger government fiscal surpluses in the name of prudence (which is what I see advocated by some). Let's see how that works out for us all.............

Excessive private credit booms are what cause financial instability - not judicious use of government deficits.

It is clear that you and I see the facts in a very different way.

You may be in agreement with Dick Chaney, whereas I strenuously disagree with the concept that deficits don't matter. Increasing deficit spending is definitely inflationary and reduces the value of the local currency (all else being equal), and is functionally equivalent to a wealth tax in that the corresponding reduction in the currency erodes the wealth of prudent savers. The appropriate response to government deficit spending is for the consumer to react in a similar manner (increase borrowing with the expectation of repaying in the future with devalued currency). This results in near-term gains, and long term severe damage. Maybe we should just follow in the footsteps of Greece or Argentina with constantly increasing government deficit spending, and run free... for a while.

Greece is not a sovereign currency issuing government... It can't create euros...the cause of its ongoing problems ultimately. Argentina has long term problems due to borrowing in foreign currency.Deficit spending is no more inflationary than any other form of spending, and is NOT necessarily inflationary. It depends on the context and how much spare capacity, including idle labour, is around. An increase in demand will increase output in the first instance. Your logic about rational consumers borrowing more cause of inflation fears if the government deficit spends sounds a bit like expansionary fiscal contraction where when you lose your government job through austerity the rational agent rushes out to Ikea to buy a couch cause they expect tax cuts for their grandchildren. Japan has run huge 200% + debt/ gdp. Where is the inflation?
https://www.bloomberg.com/view/articles/2017-08-03/japan-buries-our-mos…

I wish Grant Robertson would pick up the phone and have a quick chat to either Steve Keen or Satyajit Das.

Or Bill Mitchell or Stephanie Kelton or Randal Wray.

During my lifetime there has always been the inflation threat and high interest rates to kerb it. I like how Tony Alexander describes it - ' We have been through a 50 year period of abnormaly high interest rates and have returned to the more normal levels as since in the 60's and before' Technology is significant in holding down further inflation.

Not willing to go for deposit insurance then ? Doesn't give you warm fuzzies about their ability to manage the economy then does it ?