Our national airline has issued a forecast of earnings for the year to June 2020, in which it expects an 'underlying' loss of $120 mln and other 'significant item' losses of more than half a billion dollars

Business
Our national airline has issued a forecast of earnings for the year to June 2020, in which it expects an 'underlying' loss of $120 mln and other 'significant item' losses of more than half a billion dollars 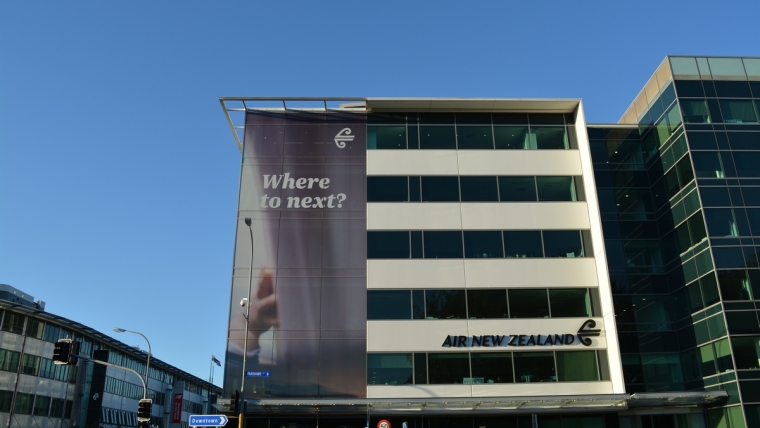 Air New Zealand is forecasting an 'underlying loss before other significant items' of $120 million for the financial year that finishes at the end of this month.

The 'significant items', which include mostly losses but some one-off gains as well are estimated to add losses on top of the underlying loss in the range of -$484 million to -$624 million.

So, at worst the overall loss might be just under $750 million. Most of the one-off loss figures are in line with estimates Air NZ previously provided to the NZX on May 26.  The one addition is a an estimate of a $70 million gain related to foreign currency.

Air NZ suspended its earnings guidance on March 9 as the Covid-19 crisis worsened and since then its business has been devastated by the border closures and the lockdown.

The airline said on Thursday the recent move to Alert Level 1 "has enabled the airline to slowly restart the domestic network, however revenue and earnings are significantly lower than expected prior to the outbreak of Covid-19".

Last week Air New Zealand responded to - but did not deny - speculation from Australian media that it may soon go to shareholders to raise more capital.

The below table is the airline's estimate of the 'other significant items', which are on top of the expected underlying loss of $120 million. 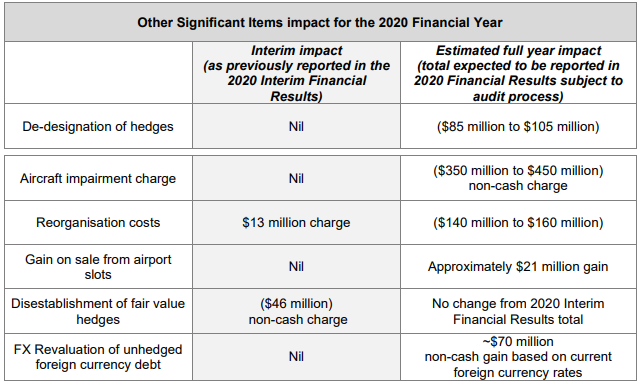 $885 mill taxpayer bailout in 2001. Some unfortunate travellers who now cannot get their legal entitlement of a fare refund might be wishing that hadn’t happened. Still if this time, the whole damn shooting box had gone into administration, that likely would have happened anyway.

Is it a bailout or investment when $885m turns into over $2b when you take into account dividends and share price?

The Government simply cannot afford a bailout of Air new Zealand this time around .

They've already stumped up almost a billion in loans if they are needed. If Air NZ get through that, the loan is converted to equity. Simple, but devastating to any other share holders.

More likely, there'll be an equity raising in the next few weeks to shore things up and take advantage of the surprisingly high share price.

Anyone want to buy a 777, I know of some going cheap? 1 careful owner.

How many planes are owned and how many are leased ?

Maybe its time to go into Voluntary Administration to get out of any leases ?

How do we short sell AIR shares?

Watch out for a bloodbath as AIR will be stuck with high costs while other airlines restructure and cut jobs while AIR is hamstrung by government trying to protect jobs with job subsidy which will force them to keep overpaid pilots etc.
Virgin Australia will have the best cost base soon and can fly domestic here and OZ which turn the srews on AIR and may see AIR burning money on the main trunk domestic as well as trans tasman

This is going to lead to a spectacular destruction of shareholder value .

Airlines are shocking investments at the best of times , these are the worst

Warren Buffet ditched ALL his airline shares in March or April .........the man either has crystal balls or is a genius.

If Buffett has a crystal ball it was not helpful - he sold his stakes after the big drop and made a significant loss on the investments.

Give it time mfd - how do you/we know that some of those holdings weren't/will not go through bankruptcy? They could yet and he's at least got some of his capital back - other shareholders could lose everything. And Buffett is long term - this current crisis is just in its opening plays in my view. Much more to follow.

We don't, and I certainly wouldn't invest right now. I'd probably have done much the same as Buffett if I'd been holding any airline shares, although they might have been in with the batch of shares I dropped early-mid March. Apparently Berkshire sold out in April, as an example Delta traded in the low $20's through April, traded at ~$60 at the start of the year and is now at ~$30.

Certainly not a crystal ball trade, although I wouldn't criticise him for it as noone expected the rally since the sale. I would not be at all surprised if the price dropped below $20 later in the year.

He would have got ZERO from an airline in bankruptcy .

That man was mentored by people who were traders in the Great Depression , they learnt a thing or two back then about when to hold and when to fold

How do you reason that when they have not even had to start on the govt loan yet?

Sir John Key missed a bullet when he resigned as director of Air new Zealand in December .

He seems to have a knack of seeing trouble coming and getting out just in time .

He got out of Merrill Lynch before it got lynched, with his share-options intact

Absolutely - that's the conversation I've had with some National supporting property investor types. They love JK but can't believe that it could be the top of the market. I tell them - John knows when to get out...look at his history. That his jumped out of the Auckland market (or at least the majority of that title) and now Sydney, should be a clue for many...

He has sold his Sydney apartment also. On to Hawaii...Aloha.

Yes, SJK is a man who knows what's about to happen alright. If it's his 6th sense, I wish I had it.

You do! Just watch....and he tells you. You have a grace period in which to act in all of the above cases ( and going right back to his first job at Lane, Walker Rudkin - which met a similar fate to those of his later employers!).
The biggest clue he gave us all? That last one on the list.
Given that the mantra of his Jewish mother will have been "Son. To make yourself truly wealthy, buy property and never sell it" and yet he did; and the apartment this month in Sydney after just taking delivery. A clue, a clue....!
https://www.stuff.co.nz/life-style/homed/real-estate/121284015/sir-john…

By Jove, I think you are right. Just waiting for him to bail out of ANZ?

ANZ should be lucky...