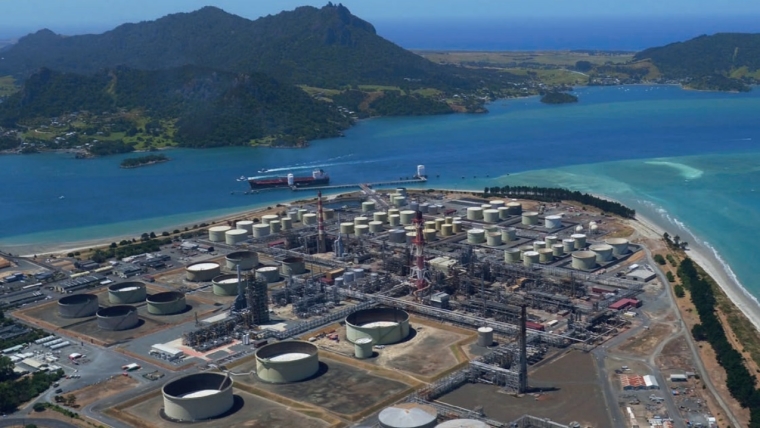 Refining NZ is pushing ahead with plans to stop refining operations at New Zealand's only oil refinery at Marsden Point, Northland.

Depending on various approvals the company is looking at switching to an import-only model by the middle of next year.

Refining NZ said on Tuesday it had reached an "in-principle agreement on key commercial terms" with Z Energy for converting operations at Marsden Point to a dedicated import terminal. This followed a similar agreement reached with BP in February 2021.

This means Refining NZ will now "take steps" to prepare for a shareholder vote to approve the move in coming months.

The company has clearly favoured ceasing refining operations since announcing a strategic review over a year ago.

It said the strategic review was prompted by a significant decline in refining margins as a result of excess refining capacity in the Asian region.

The amount of time taken to reach a definitive decision appears to have been based on reaching agreements with its oil company customers/stakeholders.

The company gave some details of its plans earlier this year in conjunction with releasing its results.

Tuesday's announcement made little specific reference to the implications for jobs other than to say the decision would involve a "big change" for employees.

Previously Refining NZ has indicated it employed over 400 staff and about 250 contractors, but didn't break down where those staff were specifically employed.

The company said its agreement with Z Energy is for an initial term of 10 years.

"The agreement includes provision for third party access to unutilised capacity on its Refinery to Auckland Pipeline (RAP).  Refining NZ remains focused on concluding negotiations with its only other current refinery customer Mobil," the company said.

"...It means we can progress to the next stage and prepare for a shareholder vote to approve this shift in our operating model before a final decision is made.”

James said the change from refinery to import terminal would involve "little change for New Zealanders".

"However, this will be a big change for our operations and workforce at Marsden Point and for our community.

"A key focus for us is on how we support our people through this transition and work with central and local Government and agencies to make this a well-planned and managed transition for our workforce and the region.”

James said the company had been working hard on the detailed planning about "exactly how we might run an import terminal operation", and what other opportunities there might be for the site.

"Marsden Point has huge potential being a large industrial consented site, with deep water port access, large electricity and gas connections and a highly skilled workforce.  We want to explore what the best opportunities are for the site, for our region, and for New Zealand."

She said the next step would involve obtaining the necessary lender and shareholder approvals, negotiating binding agreements with customers and progressing detailed plans for the change in operations, including "workforce changes".

Refining NZ describes itself as is the country’s only oil refinery and the leading supplier of refined petroleum products to the New Zealand market, including petrol, diesel, aviation fuel and other products.

"Refining NZ processes a range of crude oils imported from offshore markets to produce premium and regular petrol, diesel, aviation and kerosene, and fuel oils for our oil company customers (BP, Mobil and Z Energy).  The Marsden Point oil refinery supplies around 70% of New Zealand fuel demand, delivering fuel to Auckland through the Refinery to Auckland Pipeline (RAP), to Northland from the Marsden Point site and to other parts of New Zealand through coastal shipping vessels," the company says.

Seems a reasonable decision, with oil imports peaking in 2017 and declining ever since it doesn't make a lot of sense to try to keep this open when demand will shrink rapidly over the next 10-20 years.

The key priority should be to ensure those that will lose their jobs can transition into something new and hopefully more sustainable.

Like working in the oil and gas sector in Australia.

If they are New Zealanders they'll only end up back in New Zealand 10-15 years from now when we've all divested from oil and gas, for their share of New Zealand's social benefits that they no longer get in Australia.

With this conversion, the economy risks losing over 300 jobs paying 100k+ a year for eternity. RBNZ should model how much wealth effect it needs to create with more printed money to fill this productive gap with household consumption.

Also, the government could announce an inquiry into the rising cost of wholesale power in NZ, followed by setting up a working group to come up with reforms, months of consultation and further months of bureaucrats at MBIE drafting up policies.

It's not possible to fill productive gaps with more money printing. That merely drains resources from other productive parts of the economy.
There is a short run GDP effect.

Probably not a lot. Adds an extra layer - instead of importing crude from volatile places, we import the refined stuff from, say, Singapore, who in turn imported it from the volatile places.

Strategically risky if a conflict/embargo emerges in Asia. A conflict in the South China Sea will put paid to any view that we have security of refined product relative to crude.

Interesting article. I think New Zealand carries about 90 days of oil in the Strategic Petroleum Reserve (SPR) but, last time I looked into it, they're predominately just financial options and not physically landed supply. It would be interesting to get a Government take on their capability to deal with a physical supply shock given we will now be at the end of a much longer supply chain if shareholders approve this. Even if the oil is delivered in a war or other crisis we wouldn't have refining capability to use it.

Edit to add: It looks like someone called Fernando Oliveira at Uni. of Auck. Business School has actually been looking into the SPR. Maybe we could deviate from the norm and ask someone with knowledge to bring us up to speed? https://cdn.auckland.ac.nz/assets/auckland/business/our-research/docs/C…

According to reports, NZ has only 19 days of reserves, so if the proverbial hits the fan globally and we cannt get oil supply (either raw or refined), then NZ is going to be ICE less within a few weeks.

What is the global pandemic showing us about:
Economic Resilience
Strategic State energy supply
Fragility of global supply chains

What knowledge is now being demonstrated?

All the more reason to electrify as many vehicles as possible

Unfortunately NZ doesn’t have the electricity generation capacity to power these electric vehicles.

The UK are planning ahead and constructing two new nuclear power plants just for the additional load from electric vehicles.

Lol I'm guessing you are referring to Hinkley Point C - the biggest boondoggle and waste of taxpayer money in the history of the UK. HPC requires an electricity tariff higher than that already delivered by offshore wind, solar, gas & the European interconnection before it is even viable. The UK taxpayer is still on the hook for the inevitable construction cost overruns and the disposal of the used fissile material.

Nuclear is nothing more than a fancy way of boiling water. Since the 1960's has failed globally to become a significant portion of electricity generation anywhere, except France...who are now faced with a multi-billion dollar task of replacing worn out reactors from the 1970s & 80s. Better value to invest in wind and solar and even hydrogen for energy storage.

whist i am all for reducing our reliance on oil and petroleum - i really don't like the idea of having no refining capacity at all in NZ -- the recent Suez canal incident and Covid really highlights how vulnerable supply chains can be!

When you privatise your infrastructure you loose the ability to say no to private organisations doing whatever they wish with their assets.

no details on who is going to pay to remove the redundant boiler,heat exchangers and associated equipment,some from the original plant built in the 60s and sure to have asbestos insulation from that era.

That would be you and I.

Ironically in a worst case scenario, we could clear the traffic in Auckland. Covid/Oil Crisis for government 2023.

Or MSD could introduce Crisis Energy Payments to those already on some sort of benefit to fuel up their cars and let the rest of NZ suffer at the hands of 'market forces'.

The folly will come back and bite hard.

And silence from the Govt about the importance or otherwise of a Strategic Supply. perhaps they just dont care!

Perhaps they are hoping their leftie voter base, who are clueless enough to believe industries chased away from our shores will help battle climate change, see this as a win.

Or maybe, if you do neoliberal privatisation of your strategic infrastructure to 'the market' you loose the ability to tell private organisations what to do with their assets.

Given the only "Strategic Supply" this government seems to be able to produce is printing money, then handing it out to beneficiaries and landlords, I'd be surprised to see them comment TBH.