Take note NZ businesses: Southeast Asia is on its way to becoming 'the new China', according to ANZ

Take note NZ businesses: Southeast Asia is on its way to becoming 'the new China', according to ANZ 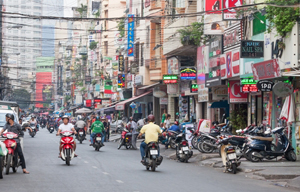 New Zealand businesses are being encouraged not to fixate on trade with China, in all its glory, at the expense of Southeast Asia.

ANZ is adamant the Association of Southeast Asian Nations (ASEAN) will be the “factory of Asia” – the new China – in 10 to 15 years time.

ANZ’s chief economist for South Asia, ASEAN and the Pacific, Glenn Maguire, brought this message to those gathered at the ‘Doing Business with ASEAN’ conference, hosted by the Ministry of Foreign Affairs and Trade in Auckland this week.

He said ASEAN – including Indonesia, the Philippines, Singapore, Thailand, Vietnam, Cambodia, Malaysia, Myanmar, Brunei and Laos – has been overshadowed by China.

New Zealand signed a free-trade agreement with Australia and the ASEAN in 2009, but we’ve only just scratched the surface in terms of making the most of this relationship.

Maguire saw three distinct “pillars of growth” in Asia; China – the major pole of growth that’s starting to slow; India – the next emerging giant; and the ASEAN in the middle.

“I tend to think the ASEAN is the Marsha Brady of the economies. It’s the middle child, it’s misunderstood and it’s a little bit under-appreciated”, he said.

While members of the ASEAN collectively make up the 7th largest economy in the world, ANZ forecasts it’ll be the 5th largest in five years time.

Maguire pointed out the ASEAN also has a growth cycle that’s much less volatile than its competitors, including those in the West.

“This reflects the fact that many of the economies are low income, they’re developing, so they have a firm degree of endogenous momentum, and that keeps the business cycle more linear, rather than muted.

“The other point to note is that the ASEAN economies are not leveraged – they don’t have a debt problem.

“So when we look at ASEAN as a whole, it still has the ability to grow via finances, deepening and developing its financial markets.”

Members of ASEAN plan to form a trade bloc where goods, services, capital, and labour are allowed to move freely between the member states, by the end of the year.

However recognising the diversity among the ASEAN’s member states, Maguire maintained they will be segmented, before they’re integrated.

Maguire said the key interest for New Zealand is in Indonesia, the Philippines, Thailand, Malaysia and Vietnam. These countries, in the middle of the risk and growth potential spectrums, are going to be competing aggressively to attract foreign direct investment (FDI) and production platforms.

“Factory Asia is currently in the process of drifting south from China, into the Mekong and into those five competing economies”, Maguire said.

“The ASEAN will be as important for Australia and New Zealand as China is now.”

He said the first factor spurring this movement is the age of the 660 million people who live in the ASEAN.

The average age of manufacturing workers in China is 37 for example, while through the middle of North Africa, India and the ASEAN it’s much younger.

Maguire said, “This is encouraging the world’s leading companies to already start looking at the ASEAN as a production base”.

However, most importantly, he said cheap labour in the ASEAN is driving its growth.

Countries in the ASEAN even have lower wages than factory workers in Rwanda – Africa’s new manufacturing hub.

Maguire said countries in the ‘Mekong frontier’ group – Myanmar, Cambodia and Laos – are poised to industrialise much quicker than their ASEAN predecessors, and will be modernised within the next decade.

Accordingly, they will move from being exporters of clothing and apparel, to exporters of higher value goods, much quicker.

“For the ASEAN to continue industrialising and modernising, you do need to have this process of technological innovative, Maguire said.

“So the lead economies in Asia – Japan, South Korea and increasingly China – have to move away from that model of imitation and move to a genuine model of innovation, and I think we are seeing that happen.”

Maguire said we are already starting to see higher skilled manufacturing in ASEAN. For example, Vietnam only started manufacturing handset phones/components five years ago, but this product now makes up 25% of its exports.

ASEAN ripe with opportunity for NZ to harness

Importantly, FDI into the ASEAN was larger than it was into China in 2013.

Working hand-in-hand with this development, Maguire said we’re seeing a burgeoning middle class, and thus seeing the ASEAN become a consumer as well as a producer.

Given cities are usually built by the coast; Maguire expects the whole 12,000km long coastline from Beijing south to essentially be one big city by 2050.

He said New Zealand is already ahead of the rest of the world in terms of tapping into this market.

“I have to say, no economy has done as much work and as much research in preparing for the ASEAN economy than New Zealand.”

However, it gives a word of warning; “The trading, business and investment opportunities won’t come on a platter, because the rest of the world will also be contesting those opportunities”.

So if I pay an ASEAN worker $1000 USD, how much does that _inject _back_into_the_NZ_economy? (velocity of money)

Yes, when we have to get off the fence when China's ridiculous Nine Dotted Line finally hits the fan it will pay to have strong commercial interests outside China.
http://www.telegraph.co.uk/news/worldnews/asia/china/11630185/US-China-w...