ASB has posted a 6% rise in annual profit as lending grew 10% and deposits grew 5%.

ASB's operating expenses rose $21 million, or 3% to $826 million, which was attributed to higher staff costs, continued investment in frontline capability and technology, and marketing costs. However, ASB's cost-to-income ratio dropped 110 basis points to 37.3%.

Loan impairments rose $41 million, or 46%, to $130 million due to increased provisioning of dairy farming loans, and higher unsecured retail provisioning. Some 3.3% of ASB's dairy portfolio was impaired at June 30, up from 2.4% at December last year (see chart below).

"We have taken a conservative position and have increased provisions in the dairy sector accordingly," ASB CEO Barbara Chapman said. "That said, we remain confident in the asset quality of our rural book and see our farming customers responding well and managing their businesses in response to the conditions."

(The chart below comes from CBA). 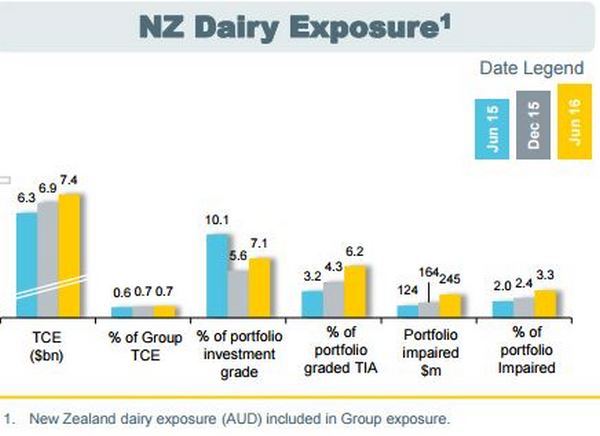 ASB's return on ordinary shareholder's equity dropped 100 basis points to 18.1% from 19.1%. Its return on total average assets was unchanged at 1.2%. The bank's common equity tier one capital as a percentage of total risk-weighted assets rose to 10.0% from 8.8%. The Reserve Bank mandated minimum is 7%.

"We have achieved this result against the backdrop of a highly competitive market and some significant headwinds in the form of global market volatility and fluctuating commodity prices. Despite this, we have remained focused on executing our strategy and pursuing initiatives to drive profitable growth across our business," Chapman said.

CBA pays out 76.5% of profit in dividends

CBA itself posted a 3% rise in annual cash profit after tax to A$9.45 billion. Its return on equity was 16.5%, an annual drop of 170 basis points from 18.2%. CBA's net interest margin also dropped, falling two basis points to 2.07%. The bank's paying a full-year fully franked, unchanged dividend of A$4.20 per share, equivalent to a cash profit dividend payout ratio of 76.5%.

"An ongoing focus on productivity and credit quality will be important. But we remain positive about Australia's economic prospects, driven by population growth, our proximity to growth in Asia, and the attractiveness of Australia as a destination and a trusted source of a broad range of goods and services," said Narev.

no-one wants to get started on it?... just afraid to post inappropriate comment?.. :-)
"CBA pays out 76.5% of profit in dividends" on the money from the air..

I can't seem to recall the last time any of the big four in NZ had a lower yoy profit announcement.

Where is all of that YOY 'after tax profit' going?

Money from the air eh. No need for deposits or a balance sheet then. Off to the printery.

Well its not bad news for me I have a lot of money invested with them so with results like this they cannot cry if things suddenly get tough. The last thing we need is the banks going down the toilet.

Older people who have saved for retirement are once again being ripped off by offshore owned banks. You can't tell me they can't afford to give investors a decent return when they are achieving record profits. The whole banking system is in need of a big shake up. How can smaller NZ banks (i.e Heartland, Co-operative) offer higher rates than the big four?

buys some shares then.

Shares don't give the regular monthly income that a lot of older folk rely on. The share price is only increasing because of the number of investors switching from term deposits to shares. But that bubble will burst, sooner rather than later.

Lets see how much of the rate cut announced today that the ASB passes on after another "The banks made another record profit" announcement.

oh break out the champagne Dennis...

John Key would be loving this historical data........oh my farming lads look how successful National has been, we have doubled the profits of your banks!