Big 4 New Zealand banks still near the top of the international profit heap, despite a little belt tightening last year 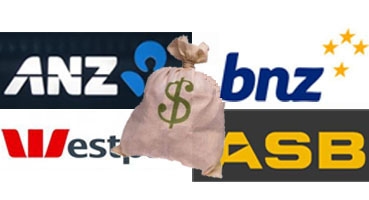 New Zealand's big four banks rank near the top of the pack across a range of profitability measures when compared to their counterparts from both advanced economies and major emerging economies.

For the sixth consecutive year interest.co.nz has crunched numbers for ANZ New Zealand, ASB, BNZ and Westpac NZ, and added NZ to a bank profitability benchmarking table in the Bank for International Settlements' annual report. And once again the NZ banks place towards the top, and ahead of their Australian parents, who are much criticised for their strong profits and who've recently been slugged with a Federal Government bank levy and now slapped with a South Australian state levy too.

The Bank for International Settlements (BIS), the central banks' bank, features banks from 16 countries in its profitability table.

Overall, the numbers crunched for addition to the BIS table show life got slightly harder for NZ's big banks in 2016 versus the previous year. However, from a profitability and financial strength perspective the NZ banks still stack up well against international counterparts.

In terms of 2016 net income as a percentage of total assets, the NZ four combined come in at 1.38%. That's down from 1.53% in 2015 when the Kiwi banks topped those from all countries surveyed by the BIS. At 1.38% for 2016, the NZ banks are third behind only the major banks from the massive economies of Brazil and Russia. Brazil's big three banks come out top at 1.99%, followed by Russia's big three banks at 1.86%.

NZ's high placing in terms of fees and commissions comes after a Treasury report on competition in NZ banking, that interest.co.nz reported on in 2015, noted some bank fees were "concerning," with fees appearing to account for a relatively high portion of bank profits in NZ.

Finally in the BIS table, NZ's big banks rank fourth lowest in terms of loan loss provisions as a percentage of total assets at 0.09%. That's up from 0.08% the previous year. The Swiss banks have the lowest loan loss provisions at an eye boggling 0.01%, followed by Japan's big five banks at 0.06%, and Sweden's big four at 0.07%. The Aussie banks are seventh equal with the big six British banks at 0.15%.

*With number crunching assistance from Suhaimi Mohamad.
**Number of banks in parentheses.

Here are links to our previous stories based on the annual BIS bank profitability table.

Our big 4 banks appear to be the developed world's most profitable, based on their pre-tax profit

Overall, the numbers crunched for addition to the BIS table show life got slightly harder for NZ's big banks in 2016 versus the previous year. However, from a profitability and financial strength perspective the NZ banks still stack up well against international counterparts.

Before or after profits are shifted across the ditch to the Australian parent banks?

Looking at the ASX I'd say the shareholders in Australia (which will be the vast majority) will be having their super funds pumped up with profits taken from NZ. We need to get on board with buying up Australia as they should be working for us instead.

It's been a rocky ride for ANZ shareholders this year. View price chart, YTD tab

I hope they've got their quadrillion dollars worth of derivative positions covered.

Stephen. Much is made by some commentators of bank shareholders 'creaming it' when the reality is these shares are for Kiwi investors,only average performers on a total return basis. Some will argue this is because the price has been inflated by speculation and that could be correct but on a straight comparative basis with other equities over the post GFC period, the TR for bank shares is mediocre.

The latest Aussie bank tax grab makes them even less attractive. I would now not participate in any capital raising, if offered.

Why should we be impressed that NZ's Aussie banks are more efficient at extracting value than their international peers?

Because it's the neoliberal capitalist party line, toe it. Greed is good.

Of course with an OCR of 1,75% and an average lending rate that must be close to 10% for everything other than Mortgages , it has got to be the biggest margin business in New Zealand .

Even an idiot could make money with such a profit margin

For someone who says they worked in banking, you remained pretty oblivious to how the banking sector works.

What is wrong with his comment? I would go as far to say that the housing bubble has provided the business model for the easiest money NZ and Australian banks will ever make, particularly from wholesale funding.

How so?
I mean, it is easy to have that position if you believe all borrowing is undertaken at the RBNZ overnight rate.
But that's not really how it works, right...
It's also very easy to assume if you don't factor risk into the equation, which you also mustn't be doing..

Wholesale funding by the Australian banks for the purpose of mortgage lending is a gimme. Indirectly, nothing to do with the RBNZ overnight rate.

Factor risk into the equation. And what "risk" is that? That the NZ / Australia appetite for debt will crumble? That the IR differential will narrow? That the political powers will refrain from gearing the economy towards asset price inflation?

The real risks have yet to be revealed or become obvious. That's why the FIRE sectors and the govt are only paying lip service to risk and its implications.

"Wholesale funding by the Australian banks for the purpose of mortgage lending is a gimme. Indirectly, nothing to do with the RBNZ overnight rate."
Well, yes, isn't that my point (the first part)? Borrowing to lend isn't at some nominal OCR.
Short term wholesale funding is most definitely directly influenced by the RBNZ overnight rate, as that is it's specific purpose.

"The real risks have yet to be revealed or become obvious. That's why the FIRE sectors and the govt are only paying lip service to risk and its implications."
So that's your justification that banks are making huge supernormal profits?
Just because you don't know a suitable risk premium, we'll just conveniently forget about factoring it?

I think people have become so accustomed to ZIRP that they believe their is no risk premium.

You're probably correct.
Nonetheless, it's an absurd assumption to make.

Dont panic nymad , I have a fair grasp as to how bank funding works have sat on one ALCO albeit 10 years ago and have been on more than one credit committee in my career, so I fully understand how WACC works and have a good idea of the generic bank funding model .

Right now , the way the big 4 lend money , its like shooting ducks in a tunnel .

Again, obviously you don't...
"Even if their WACC is as high as 5% , which its not"
As per linklater below, I too would be extremely surprised if their WACC was below 5%.
Exactly how are you calculating this? Because there is an error, somewhere.

Boatman - that is the most naive statement I've seen you ever make, why do you think the OCR currently has anything to do with calculating bank margins ? Please explain! Unbelievable really but please explain to us - sorry I didn't see your subsequent posting, but again before you start cricising , rather than asking questions, at least understand the basics.

I do not believe that any of NZs banks have a WACC of under 5%. Provide some evidence to back up your assertion.

Okay , I concede that the wider definition of WACC in respect of Banks is likely to be closer to 7% to 8% because I had not factored in corporate taxes or equity ( shares ) in my assumption .

However the cost of funding bank operations is likely to be around 5% or less , before taxation and the costs of shareholder equity

"Okay , I concede that the wider definition of WACC in respect of Banks is likely to be closer to 7% to 8% because I had not factored in corporate taxes or equity ( shares ) in my assumption"
1 - How do you ever forget equity funding when considering WACC?
2 - How does that even make sense - doesn't corporate tax reduce your WACC?

So,you now claim that there is a 'wider definition' of WACC which is significantly higher than your original figure. This means by definition that there must be a 'narrow definition' of WACC . Can you point to any evidence that this is so? Let's face it, your claims to have a good understanding of bank funding has been shown up as a figment of your imagination. Furthermore,your claim that banks have high margins in relation to other NZ businesses is one that I should like to see you back up. use the Net Profit Margin as the benchmark and go from there.

Well that's good news isn't it. We get ripped off by our banks more than any other country. Not surprising given that we pay more for our own milk and butter than most other countries. We are pretty good at being ripped of what little money we earn.