Does NZ's new law 'ensuring multinationals pay tax based on the actual economic activity they carry out in NZ' apply to Visa and Mastercard?

Does NZ's new law 'ensuring multinationals pay tax based on the actual economic activity they carry out in NZ' apply to Visa and Mastercard? 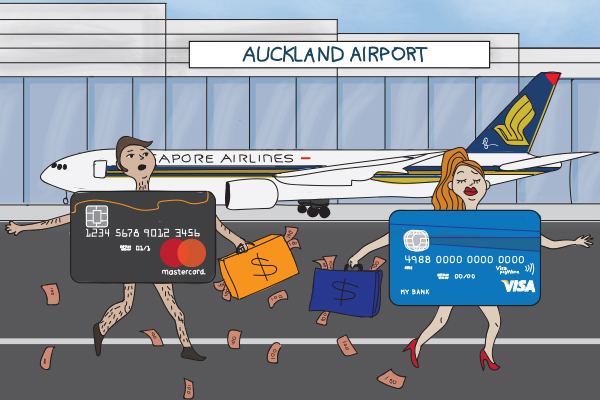 His press release was referring to the Taxation (Neutralising Base Erosion and Profit Shifting - BEPS -) Bill, which took effect from 1 July. According to Nash it will "considerably improve the integrity of the tax system."

“Companies should ideally pay tax in the right country,” says Nash. “This legislation will ensure that multinationals pay tax based on the actual economic activity they carry out in New Zealand."

Interest.co.nz decided to put the new law to an early test with a couple of multinationals whose New Zealand tax structures we've written about before. The two are Visa and Mastercard. As reported here and here, Visa and Mastercard dominate the NZ credit card market where total billings reached $43.4 billion last year according to Reserve Bank statistics. The two multi-nationals earn fees from the banks that issue their cards, and by processing payments.

However, Visa and Mastercard's NZ businesses merely provide "marketing support, client support and relationship and liaison services," and "services to related companies," respectively. Their parent companies are both domiciled in Singapore. There they enjoy sweetheart tax deals. As we reported in February, Visa NZ's Singaporean parent paid 4.3% income tax for the September 2016 year, and Mastercard NZ's parent paid 6.8% in the 2016 calendar year. For both companies that's the tax rate on revenue including what they generate in NZ from their core payments services.

So will Visa and Mastercard now have to pay tax based on the actual economic activity they carry out in New Zealand?

I asked Visa, Mastercard and Nash. It would be fair to say answers from all three don't directly address the questions, and it appears the new BEPs law changes very little, if anything at all, for Visa and Mastercard.

A Visa spokeswoman, in comments attributed to its NZ and South Pacific country manager Marty Kerr says; "In relation to tax, Visa’s position remains consistent with what we have shared previously. That is, Visa treats its tax obligations seriously and will continue to ensure that it is in compliance with all applicable tax laws and reporting obligations."

And here's what a Mastercard spokeswoman says; "Mastercard works closely with the New Zealand Inland Revenue Department to ensure that it complies with all New Zealand taxation laws, and will continue to do so following the new Taxation (Neutralising Base Erosion and Profit Shifting) Bill."

"You have to ask yourself, what is their business model? Fundamentally they earn revenue from charging a small transaction percentage on every transaction – that is, every time a Visa card is swiped, something like 0.1%, but the numbers [of transactions] are enormous. They do not provide credit. They do not lend money. Thinking about it, there are four players – the retailer or merchant, the merchant’s bank, the card issuing bank which lends the transaction credit amount and takes the default risk, and Visa. So Visa has no tangible product, good or service," says Archer.

"The same challenges apply to Facebook and Google, Uber, Airbnb, and other internet based business. To tax Visa/Mastercard, you would be looking at some form of transaction tax. This is a second, or possibly third, cousin of the GST impost on imported services."

Archer says NZ's BEPS measures strike at what might be termed the low hanging fruit.

"The main new tax measure to tax foreigners doing business here, but not previously subject to tax, are changes to our 'permanent establishment' (PE) rules. But these are really targeted anti-avoidance measures that apply where a foreign entity uses an incorporated NZ company to undertake some ancillary work to facilitate, market, or promote their products and services, and drops off a modest amount of commission or income that it 'volunteers' to be taxed locally, but retains the substantive activities and value creation offshore so doesn't fall foul of our taxing rules," says Archer.

For the new PE rules to apply the local activity must play a role in bringing about a sale, he adds.

"The problem the proposed rule is trying to address is the ability of some multinationals to structure their affairs so they do not have a PE in New Zealand, despite having significant economic activity carried on for them here. This usually involves the non-resident entity establishing a New Zealand subsidiary to carry out local sales related activities."

"The NZ facilitator must carry on an activity for the purpose of bringing the supply about. It is intended that only activities designed to bring about a particular sale to an identifiable person should potentially result in a deemed PE. Therefore activities that do not relate to a particular sale, such as advertising and marketing, would not be sufficient to trigger a possible PE under this requirement. After sales activities, such as technical support, would not be sufficient to meet this requirement, as they occur after the supply has been made. The kinds of activities that are within the intended scope of this provision primarily include activities designed to convince a particular customer to acquire the supply," Archer says.

This means the new rules are really for more conventional business models where a foreign owner has put a structure in place to minimise their NZ tax liabilities. For example this could be fragmenting or splitting activities, some in-country, most outside the country, to avoid having a PE that subjects them to full profit attribution and tax.

"The core Action Plan 1 of the Organisation for Economic Co-operation and Development's BEPS initiative was to tackle multi-national tax to address the tax challenges of the digital economy. On this the OECD has hit a wall. Their March 2018 interim report shows that this OECD action boat is taking in water, or another analogy, this significant elephant is not leaving the room soon," Archer says.

Globalisation and the digital economy was always going to be a formidable challenge for international taxation and this remains the case, Archer notes.

"This is particularly the case with our tax systems foundered on taxing foreigners with an actual presence in-country, bricks and mortar if you like. Existing international tax rules are inadequate when it comes to addressing the lack of tangible borders, which characterises the digital economy. Currently, a company with no, or very little, physical presence in the economy of another country, but with a significant digital presence, is not liable for taxation. While the way we do business has changed enormously, international tax rules have not evolved with this and the gulf is enormous," Archer says.

Below are the questions we asked Visa and Mastercard;

1) Will the Taxation (Neutralising Base Erosion and Profit Shifting) Bill becoming law change how Visa/Mastercard pays tax in New Zealand?

2) If the new law will change how Visa/Mastercard pays tax in New Zealand, how will it change things?

3) And will this result in Visa/Mastercard paying more tax in New Zealand?

And of Nash we asked;

I was interested to see the BEPS Bill is taking effect.

I have previously written a couple of stories on how Mastercard and Visa run their New Zealand revenues through Singapore. Links to my two stories are below.

I am wondering whether the Government expects the passing of the Taxation (Neutralising Base Erosion and Profit Shifting) Bill will mean Visa and Mastercard make any changes to how they pay tax in New Zealand, and if so how?

It seems the government's announcement that companies will pay their fair share of tax in NZ is overstating things by quite a lot.

"They do not provide credit. They do not lend money. " Really? I use a Visa card virtually daily. I pay it off in full every month so that I do not incur any interest. If this is not credit then what is and what is it? It is after all a Visa CREDIT card. Or is it the bank providing the credit? This sound like lawyer double speak to me.

Indeed, they do though provide a service, so tax is due on the service they provide IMHO.

“They” refers to Visa who are the card association. The credit is provided by your issuing bank.