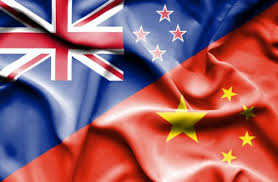 She said her and Li agreed to hold the seventh round of negotiations “soon” and to “make joint efforts towards reaching an agreement as soon as possible”.

“I reiterated to Premier Li that New Zealand welcomes all high-quality foreign investment that will bring productive economic growth to our country,” Ardern said.

Furthermore, Ardern witnessed the signing of the following agreements between New Zealand and Chinese leaders:

“The new agreement also enhances the ability of both countries to detect and prevent tax evasion.

“The new tax agreement is also significant in the ongoing fight against base erosion and profit shifting (BEPS) by multinationals. Significantly, this tax agreement with our largest trading partner will also include new anti-BEPS measures. These include measures to prevent companies structuring their activity to avoid taxation on profits.

“Double tax agreements make it less costly for a business in one country to do business and invest in the other.”

He said New Zealand is only one of a small number of bilateral partners to have a financial dialogue in place with China.

Details around exactly what this means for Treasury are at this stage scant, as is information about the other two agreements signed:

Ardern and Li also released a joint statement that committed both countries to working together more to address the impacts of climate change.

She discussed China’s Belt and Road Initiative with Li, noting Trade Minister David Parker would lead a business delegation to the Belt and Road Forum in Beijing in April.

“This will help identify opportunities for mutually beneficial and transparent cooperation so we can complete a work plan as soon as possible,” Ardern said.

“Premier Li and I also discussed regional and global issues where New Zealand and China have common interests including our support for the World Trade Organisation.”

The NZ-China FTA upgrade will be concluded and delivered as a present to celebrate the 50 years of diplomatic relationship in 2022.

However, the quality of the present will depend on how NZ behaves as a full fledged strategic partner of China in the next three years.

Perhaps China can sell us one or three of the HELE coal power plants they are putting up at the rate of one a week.... which tells us all we need to know about their commitment to CC.....

Yesterday on Morning Report it was reported that China would be seeking increased access for it's citizens to immigrate to New Zealand. China is a totalitarian and aggressively expansionist country that is already sending huge numbers of immigrants here. What is their motive? It is all the more perplexing and concerning when last year they made moves to attract their own citizens to return to China and within the last few years relaxed the one child policy.
President Xi says we have to trust them. Trust is something that is earned through the experience of a relationship. He may try to command it, but that is the attitude of the leader of a totalitarian state. We have plenty of reasons to be very wary of China.
- It is a totalitarian state that has demonstrated its readiness to bully and ride roughshod over anything in its way, not the least of whom - it's own citizens.
- It is quite willing to erect barriers to free trade whenever it suits
- Have any joint enterprises in China worked out for NZ. They always seem to fail or do poorly for some reason or another?
- We have plenty of evidence that China will bribe or bully any where in the world to further their ends

As I have said before we are far too dependent on China for trade which could easily and capriciously be turned off when it doesn't suit China. We urgently need to turn down our efforts in China and concentrate our efforts with them to achieve the highest quality and profitability in our trade with them. (while trying our hardest not to insult or enrage them, with the obvious results which they are only to ready to hint at) . We need to redirect our efforts to a far wider range of markets and substantially reduce our exposure to China.
If the situation was reversed, what would China do?
Individual NZ businesses should urgently do a risk analysis on what would happen to them if they were to loose all or most of their business with China, in a NZ economy that has lost 20% of it's export income and also relying on Australian exports; Australia being similarly affected. If they went broke, who would buy their business. Think about the motivations for China?

The People's Republic of China is not a totalitarian state. Mao's China may qualify it, but not Xi's China. I'd appreciate it if you call the PRC Authoritarian. Though neither one is good, there are some pivotal differences.