Business
Nouriel Roubini argues that what started as a trade war between the US & China is quickly escalating into a death match for global economic, technological, and military dominance 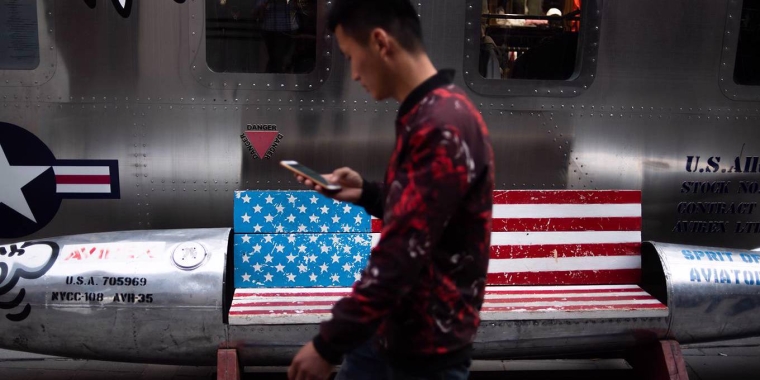 A few years ago, as part of a Western delegation to China, I met President Xi Jinping in Beijing’s Great Hall of the People. When addressing us, Xi argued that China’s rise would be peaceful, and that other countries – namely, the United States – need not worry about the “Thucydides Trap,” so named for the Greek historian who chronicled how Sparta’s fear of a rising Athens made war between the two inevitable.

In his 2017 book Destined for War: Can America and China Escape Thucydides’s Trap?, Harvard University’s Graham Allison examines 16 earlier rivalries between an emerging and an established power, and finds that 12 of them led to war. No doubt, Xi wanted us to focus on the remaining four.

Despite the mutual awareness of the Thucydides Trap – and the recognition that history is not deterministic – China and the US seem to be falling into it anyway. Though a hot war between the world’s two major powers still seems far-fetched, a cold war is becoming more likely.

The US blames China for the current tensions. Since joining the World Trade Organization in 2001, China has reaped the benefits of the global trading and investment system, while failing to meet its obligations and free riding on its rules. According to the US, China has gained an unfair advantage through intellectual-property theft, forced technology transfers, subsidies for domestic firms, and other instruments of state capitalism. At the same time, its government is becoming increasingly authoritarian, transforming China into an Orwellian surveillance state.

For their part, the Chinese suspect that the US’s real goal is to prevent them from rising any further or projecting legitimate power and influence abroad. In their view, it is only reasonable that the world’s second-largest economy (by GDP) would seek to expand its presence on the world stage. And leaders would argue that their regime has improved the material welfare of 1.4 billion Chinese far more than the West’s gridlocked political systems ever could.

Regardless of which side has the stronger argument, the escalation of economic, trade, technological, and geopolitical tensions may have been inevitable. What started as a trade war now threatens to escalate into a permanent state of mutual animosity. This is reflected in the Trump administration’s National Security Strategy, which deems China a strategic “competitor” that should be contained on all fronts.

Accordingly, the US is sharply restricting Chinese foreign direct investment in sensitive sectors, and pursuing other actions to ensure Western dominance in strategic industries such as artificial intelligence and 5G. It is pressuring partners and allies not to participate in the Belt and Road Initiative, China’s massive program to build infrastructure projects across the Eurasian landmass. And it is increasing US Navy patrols in the East and South China Seas, where China has grown more aggressive in asserting its dubious territorial claims.

The global consequences of a Sino-American cold war would be even more severe than those of the Cold War between the US and the Soviet Union. Whereas the Soviet Union was a declining power with a failing economic model, China will soon become the world’s largest economy, and will continue to grow from there. Moreover, the US and the Soviet Union traded very little with each other, whereas China is fully integrated in the global trading and investment system, and deeply intertwined with the US, in particular.

A full-scale cold war thus could trigger a new stage of de-globalization, or at least a division of the global economy into two incompatible economic blocs. In either scenario, trade in goods, services, capital, labor, technology, and data would be severely restricted, and the digital realm would become a “splinternet,” wherein Western and Chinese nodes would not connect to one another. Now that the US has imposed sanctions on ZTE and Huawei, China will be scrambling to ensure that its tech giants can source essential inputs domestically, or at least from friendly trade partners that are not dependent on the US.

In this balkanized world, China and the US will both expect all other countries to pick a side, while most governments will try to thread the needle of maintaining good economic ties with both. After all, many US allies now do more business (in terms of trade and investment) with China than they do with America. Yet in a future economy where China and the US separately control access to crucial technologies such as AI and 5G, the middle ground will most likely become uninhabitable. Everyone will have to choose, and the world may well enter a long process of de-globalization.

Whatever happens, the Sino-American relationship will be the key geopolitical issue of this century. Some degree of rivalry is inevitable. But, ideally, both sides would manage it constructively, allowing for cooperation on some issues and healthy competition on others. In effect, China and the US would create a new international order, based on the recognition that the (inevitably) rising new power should be granted a role in shaping global rules and institutions.

If the relationship is mismanaged – with the US trying to derail China’s development and contain its rise, and China aggressively projecting its power in Asia and around the world – a full-scale cold war will ensue, and a hot one (or a series of proxy wars) cannot be ruled out. In the twenty-first century, the Thucydides Trap would swallow not just the US and China, but the entire world.

*Nouriel Roubini is CEO of Roubini Macro Associates and Professor of Economics at the Stern School of Business, NYU. Copyright: Project Syndicate, 2019, published here with permission.

Could have overlaid the lessening of opportunities, perhaps

I wouldn't want to live in a world run by a communist authoritarian China, go USA!

Donny, I choose you!

The possibility of any regional, let alone full scale global, hot wars between China and the US is next to none because both countries have zilch intention to invade each other.

Pentagon has run numerous war simulations any all possibilities on war with China given the current military situation. ALL scenarios show a collapse of the US and the entire human race.

Trade war and Tech war may be ongoing but will not be long. Trump is gone for sure in 2020 election. The US elite or the shadow government will slowly realized that cooperating with China is far more profitable than containing China. After all, profit is what capitalism is all about.

Hawaii will be claimed as traditional land.

They'll discover another "ancient" map that says they own it?

So you are privy to all the Pentagon's war game simulations? Yea,right. What makes you so certain that Trump will not win again? You have no more idea than anyone else what the outcome will be,though I would love to see him gone.

I suggest that you read some WW1 history. Almost nobody believed there would be war,virtually to the day it was declared. Why? well there was too much trade and profit for it to be put at risk by war.

This scenario has been playing out for the past 20 years, from the Chinese side. It is only recently that the US has engaged or attempted to question the story-line that has been sucking the IP & creativity from the West & over to the East. It may be hard to stop the authoritarian capitalism of the East, as they rule with brutality over people who have very little or nothing. China is quick to talk about its 200 million middle & upper classes, but not so keen to enlighten us about the other 1.2 billion people working 12 hour days, 6 day weeks for US$3-4,000 per annum. They would argue that 30 years ago these people were peasants. And they'd be right.
On the other side the rich & ruling West is in its slow but steady decline, as birth rates plummet, its people become fat & lazy & as its culture & society splits into extremes - rich & poor, leadership & loser-ship, left versus right, black & white (& all shades in between) & the traditional conservatives versus the progressive urban liberals which is creating all sorts of angst. If the West cannot get its act together shortly then it will have to pick a fight to distract attention from its ailing internals - a tip from the Margaret Thatcher playbook. The East is not problem free either. They also have western disease (debt issues), so the next couple of years are going to be very interesting to watch & be a part of.

China's rise was particularly pronounced during the 8years of the Obama administration. Including the establishment of military bases on islands in the South China Sea. Obama was a "sit on the fence" President, too frightened to make a decision or take appropriate action. The Trump Administration, on the other hand, is willing to "do things" even if it means taking some risk.
It will be interesting to see how the Taiwan stand-off plays out??

Taiwan wants to buy a fleet of latest F35s (or teh French Raffale), It will be every interesting if it gets approved

Don't forget the TPP was seen by the pre-Trump Americans as a way of countering China's growing influence in the Asia-Pacific...https://www.interest.co.nz/business/82420/ryan-greenaway-mcgrevy-argues-tppa-part-broader-ideological-arm-wrestle-time-when

Very good article about something we'd all like not to have to think about.

Excellent article. Roubini’s really worth listening to. One of the very few economists who accurately predicted the global financial crisis coming. He was constantly labeled Dr Doom beforehand, but turned out to be correct.