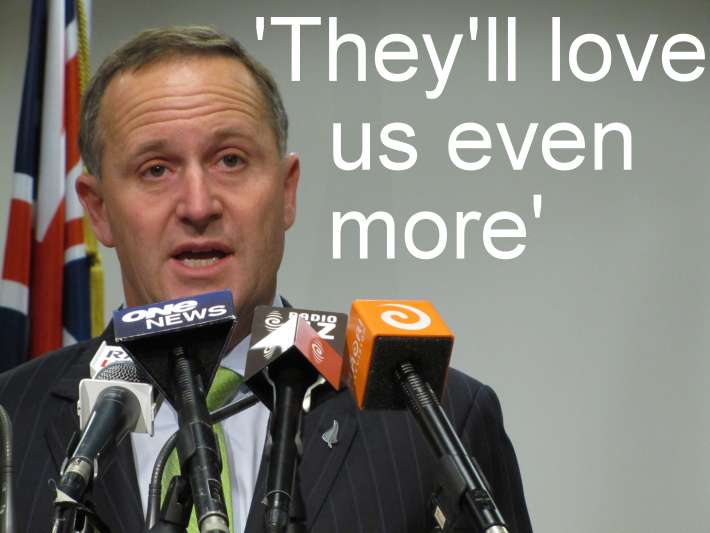 Weakness in the United States economy from the government there cutting spending or defaulting on its debt will not necessarily raise New Zealand interest rates, Prime Minister John Key says.

Meanwhile, if the US government does not sort out its debt ceiling negotiations, the New Zealand dollar is likely to keep rising against its US counterpart as investors turn away from the US dollar. And despite investors increasingly seeing New Zealand in a better light relative to the US, a default by the world's biggest economy would would send shockwaves through the global economy, affecting New Zealand, Key said.

Speaking on TVNZ's Breakfast programme on Monday morning, Key said the situation in the US, where policy-makers appear to have agreed on a framework for raising its debt ceiling, while immediately cutting about US$1 trillion of spending, could be positive for New Zealand because our economy appeared to be in a better shape.

"The biggest and most obvious place where it manifests itself is a higher New Zealand-US exchange rate, and we’ve already seen that move, and you’ve seen it this morning through 88 cents," Key said on Breakfast

"That’s simply because, like any currency pair, it’s like a see-saw – one goes up and the other goes down, in this case the US, they [investors] do not like the US economy at the moment and we’re going up,” Key said.

“From an interest rate point of view it doesn’t necessarily force New Zealand interest rates up, because actually funnily enough we become even more attractive, and so more capital wants to flow in," he said.

"The big risk for New Zealand is the risk that’s sitting out there, and that is that the US economy continues to grind along, the US has to stop spending, that slows the global economy down. You’ve already got a weak position in Europe with Greece and Portugal and other countries. The risk here is that global sentiment is weak, and that affects our markets.”

The sense in the United States over the last few weeks was palpable, Key said.

“When we were in Washington, which was 10 days or so ago now, they were very, very confident that they would get a deal. The general view from Secretary Geithner from the Treasury, or Ben Bernanke, Federal Reserve President, President Obama, it was just unthinkable not to get a deal,” he said.

“But as we get nearer and nearer [to August 2], obviously everyone’s staring to stare down the barrel of what that might mean, and when we were on holiday [last week] the front page of the paper was, ‘the 30 things that will happen to you as an American if we default.’

“It was: lose your job, interest rates going up - it was just a nightmare. If you’re on food stamps they mightn’t turn up, if you’re a service man or woman you might not get paid, there’re real life issues here.”

Even if US policy makers got a deal in place by August 2 to raise the debt ceiling, the US government would be borrowing even more and forced to cut spending as part of that deal.Cutting spending could have the effect of slowing the US economy, while a default could see investors turned off the US as they looked toward countries like New Zealand.

“What it all demonstrates is, without getting deeply political, we’ve been on the right track. We had a zero budget this time, we get back into surplus in a couple of years, we’re paying off our debt,” Key said.

“Our debt tops out at substantially lower levels than the United States. We’re at under 30% [net debt as a percentage of GDP], they’re at 70 on their way to 90%. So all up we’re doing the right things here,” he said.

Key was asked whether hiking interest rates in New Zealand would hurt the economy, with high inflation and the country's second largest city still in ruins.

“It’s worth remembering what the Reserve Bank governor did. He cut interest rates from 3% to 2.5% as a base rate to reflect what was happening in Christchurch,” Key said.

“Secondly, if you think about our inflation rate, while it’s 5.3% technically, you have to take the GST increase out because that flows out and the Reserve Bank governor looks through it. So net on net, our inflation rate is running at around about 3%, but likely to drop back to 1.5%,” he said.

Asked about stagnant wages while inflation rose, Key said the number one thing the government could do was help protect jobs.

“If you go back and have a look at where we’re at, and where we’ve come from, that’s why the government has been basically solely focussed in the last three years on trying to build our economy and build our competitiveness,” Key said.

Meanwhile on Newstalk ZB this morning Key said the New Zealand dollar could continue to rise against the US dollar if debt ceiling negotiations dragged on.

“You would expect our exchange rate to track even higher. You’ve seen the New Zealand-US exchange rate moving up on the back of the concern that the financial markets have - that the US might not get a deal done," Key said on ZB.

However a US default would send shockwaves through the global financial system, with repercussions for New Zealand.

Interest rates indeed have to trend down. As the Fed has demonstrated. That won't fix the problem. though, becasue concurrently, we have demand outpacing the ability to repay. A situation which will set in with increasing pressure as time goes on.

So we have increasing inflation and decreasing usury.

Yep the big risk is a slowing world economy...and NZ holding a shite load of debt...but if you think rates will not jump...hah....Sir Ed didn't jump and he went way up there didn't he!

Think private debt....now think bank recaps in Europe...as a bank swine how are you going to pork your capital reserves in a slow down world economy....that's right, you will screw those who are borrowing...that's silly Kiwi!

Meanwhile Lamb and Wool prices are slipping back......!

Wrong John - its our leadership deficit that is the big risk:

"The big risk for New Zealand is the risk that’s sitting out there, and that is that the US economy continues to grind along, the US has to stop spending, that slows the global economy down."

“If you go back and have a look at where we’re at, and where we’ve come from, that’s why the government has been basically solely focussed in the last three years on trying to build our economy and build our competitiveness,” Key said.

“And we’ve done a pretty good job on that front."

Perhaps I should have replaced 'spin' with 'lies'.

Word of the day: DEBASEMENT.

Oh come on JK, what about all the people in NZ who are not working but not registered as unemployed, but instead are put on the sickness benefit, DPB & ACC.  NZ has a "real" unemployment rate of around 15%.  If everything is going so well for the NZ economy why are we having to borrow $300 million per week to pay for our budget deficit.

Ya all figuring it out yet?

Heres a clue hows ya last colonial administrator getting on over at the UN?

What about the other colonial administrators before 2000?

lol, wake up and smell the reality fellow subjects or is that slaves?!

I feel sick reading this crap from Key and pretty down because there is no viable alternative.  Key's government has done nothing in almost three years except borrow more and greatly increase our public debt levels getting us even deeper into the doo-do - unemployment down indeed.  We are all doomed though because there is very little viable diffference with Goff and Labour.  Are the Green's really that bad????  They are the only ones I can see that are actually proposing anything different from what is on offer by the big two - they at least recognise that unlimited growth is not realistic and that there are constraints out there and that we have probably hit our limits.  Do we need a revolution or something for gods sake because Keep Smiling Key and Goofy only promise us more of the same????

Key's next job after Colonial Governor for the Banks of NZ will be as a Tzar in the banking system from which he has come.