NZ First Leader Winston Peters distances himself from the foundation allegedly used to funnel donations to his party, saying it sits in the 'administrative' side of the party, not the 'political wing' he takes care of

NZ First Leader Winston Peters distances himself from the foundation allegedly used to funnel donations to his party, saying it sits in the 'administrative' side of the party, not the 'political wing' he takes care of 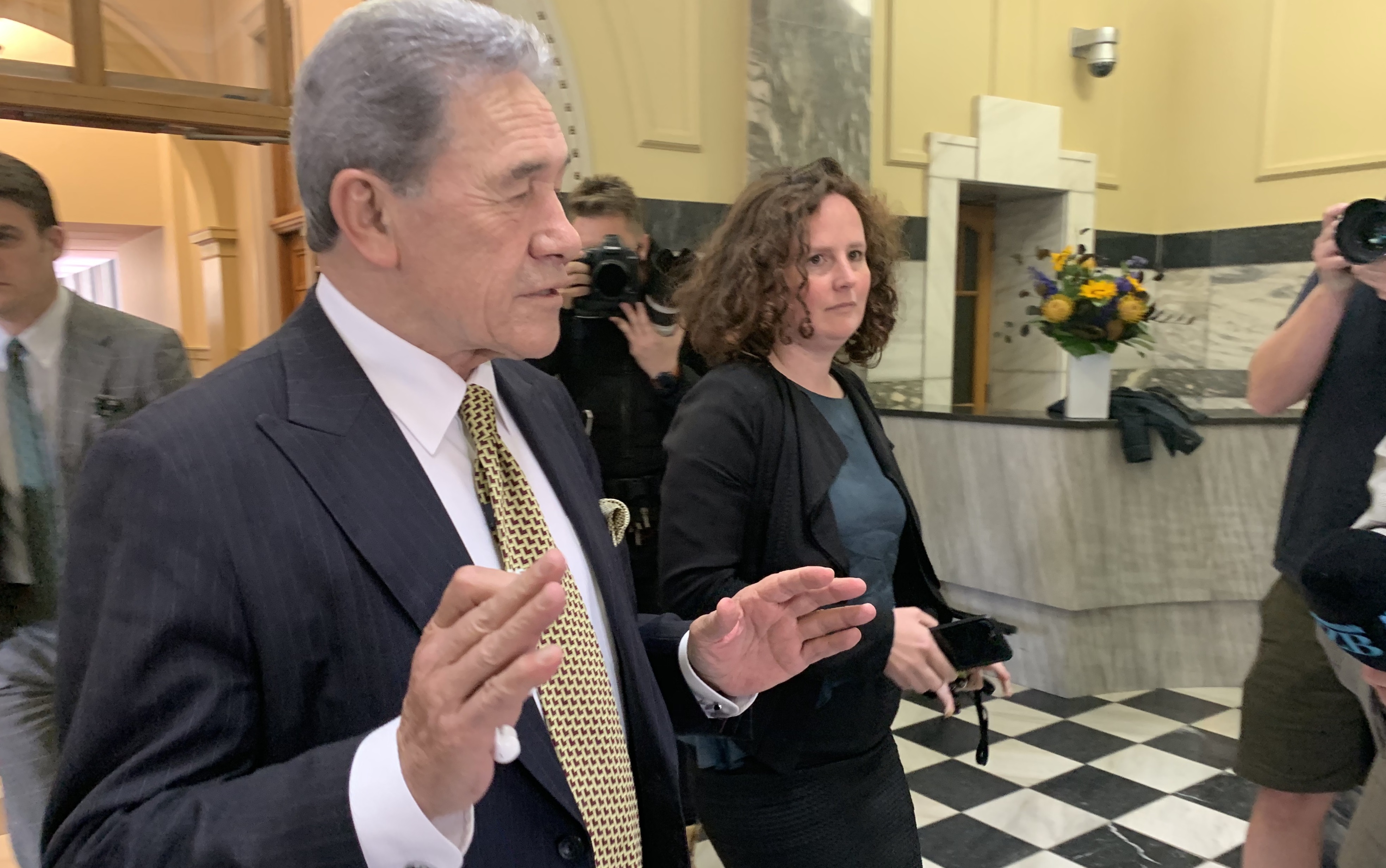 Deputy Prime Minister and New Zealand First Leader, Winston Peters, is distancing himself from a foundation allegedly used to secretly funnel donations from wealthy investors and primary industry leaders to his party.

Stuff on Tuesday reported it had seen records for the New Zealand First Foundation that suggest breaches of the Electoral Act.

It claimed almost half a million dollars in donations had been “hidden” in the “slush fund” controlled by Peters’ lawyer and NZ First’s Judicial Officer, Brian Henry, and NZ First’s founding president and political lobbyist, Doug Woolerton.

When asked about the foundation on Tuesday afternoon, Peters said: “I look after the political wing of the NZ First Party. That’s an administrative matter. You can ask somebody else.”

Peters was otherwise evasive, saying he looked forward to discussing the matter with the Electoral Commission - “a rational body”.

“I put out my press statement on the law and that’s where things sit,” he said.

Peters’ written statement said the allegations concerned a "party matter" and he was confident that NZ First had "operated within electoral laws, now and for the last 27 years”.

“Declarable donations were declared to the Electoral Commission," he said.

“Our system of democracy is based on the secrecy of the ballot and privacy of party memberships and donations within specified limits.”

Prime Minister Jacinda Ardern reportedly responded to the allegations saying it was not for her to be the "arbiter" of electoral law.

"It's a bit premature for me to make any statements or judgements other than of course there is an expectation on all parties, and all party leaders, that we operate within the law," she said.

"The ultimate arbiter of that is not me as Prime Minister but of course the Electoral Commission and those who have oversight of our electoral legislation.

"We have an independent agency who is able to do that. It's my expectation that we all abide by the law. But too premature for me to get into any hypotheticals here."

National Party Leader Simon Bridges said that if the allegations were proven to be true, this would be “the most significant electoral law breaches we’ve ever seen in New Zealand”.

He said they implied a “long-term, systematic thwarting of the law” that “doesn’t make it more likely” National would work with NZ First following the 2020 election.

Bridges put the onus on Ardern, calling for her to do more than leave the matter with the “toothless” Electoral Commission. Bridges was vague as to exactly what she should do, but mentioned seeking legal advice and using the capabilities of the governmental departments she has access to.

John Key famously once said he would not work with Winston because he did not trust him ............

Which is the pot calling the kettle black. They're all liars, Winston is the most obvious and worst offender.

But Key had his moments too: https://www.youtube.com/watch?v=E3-RYMwJiWA

Having Winston select govts based on who will give him the most baubles and who or who has been most deferential to his blustering ugliness is no basis for running a democracy. Being generous; Peter's may be within the letter of the law. But with all of his and NZF's shennanigans piling up I am hoping that the doddery old invalids who vote for him might finally realize that his credibility is non-existent and put the nation out of it's misery once and for all.

So it maybe the case the NZF used funds that were illegal to gain votes and then went with Labour who NZ didn't want in power. Then they implemented policies that went meant to be implemented.
OH Joy this just gets better and better.

Yeah, National needs to get their rightful place as FPP government winners, they don't have any outstanding investigations into donation fiddling do they?

Yes they do. Read the last paragraph of this article.

LOL national are just as bad, gifting MP's high list seats because they can elicit campion funding from a sector of the population, not to mention splitting donations to get under discloser rules and last telling porkies about it
labour and the greens are not squeaky clean either
they all do it

they will use any means,fair or foul,to get rid of winston as he is the main obstacle preventing national from regaining power.

Not so. Even John Key at his popular best could not get National over the line to govern on its own. And remember, that was when NZF were out of office for those three years and this current National lot are a mere shadow of those halcyon days, don’t you think. Quite simply, National will not regain power without a viable coalition party, full stop. Is there there any one out there? Because time is sure running out, and fast. And then the other prospect, a Labour & Green lot, just the two of them, unbridled and fanciful. Are you sure Winston is not necessary?

Moral of the story : Don't call journos psychos and expect to get away easily. The battle is well and truly joined. Winston vs the journos. The fall out from the super scandal is going to continue on the front pages for months to come. Beneficial diversion for the Nats. Hope they don't screw it up by some stupid comments of their own. Will JA strike at the right time ? 2020 looking to be juicy.

Jacinda weak as usual, obviously never expresses an opinion, just shrugs it off, I can’t do anything about it.
You are the Prime Minister Ms. Ardern, you are meant to be leading the government but you would rather holiday overseas, tell the country you need days off after going to the dentist and appear on TV driving Colbert around.
Pathetic!

Her comment to him in the car.
"I am a woman, I can multi task".
If a man said anything remotely like this it would be a huge in the media.

Getting sick of her comments "it would be inappropriate to comment", "I will wait until I receive more data before making judgements", "there is currently an inquiry so I won't comment until then", "this is a private matter" "before the courts". Smile and waaave

Wonder who she learnt that from?

A good indication of when things are wrong is when politicians distance themselves.
The nature of Winston is such that he has denied any knowledge of such funds; right, the autocratic that he is he had no knowledge of the source of $500,000 of NZF funding.
Even Jacinda (with memories of Helen and the previous NZF funds fiasco) has also distance herself.
The similarities between Winston and Donald are also becoming very apparent - deny, attack, deny, blame the fake news, be selective regarding the truth, play the victim, avoid answering questions and totally control what is said . . .

Bye Bye Winston. Don't let the door hit you in the arse on the way out.

Racing industry bribe scandal ; had to get the late P Williams QC to get him off (as did Mr Asia gang)
Money from PGF could have been diverted to companies with NZF and Peter's partner influencers on board.As well as PGF being the ultimate in cynical useless porkbarrel politics
Accidentally getting overpaid in Super for years(despite being Mr Gold Card himself).And trying to get 1.8million out of the taxpayer for this "mistake", using taxpayer money to pay huge legal expenses to sue the taxpayer.
Now this!
Pattern emerging....

that was a huge mistake taking that to court, he is going to lose the case and unveiled more dirty laundry about himself,
sometimes his ego gets in the way

Everyone has a Foundation, Clinton, NZ First... Everyone....

Yup... doesn't mean it gets spent on political objectives though

People called Key, Teflon John , now we have Evasive Ardern ........ she has an evasive answer to everything , and when she does not have a smart-arsed answer , she answers a question that was not asked ........and never confronts anything until its a crisis .

She came into office lying (or not being honest with us ) about her pregnancy , and its been downhill ever since

Winston believes that NZ First has operated within the rules!
To be fair he does still believe in the tooth fairy!

funny you raise her pregnancy... occurring at time when there was some vigorous negotiations with Winston.