Winston Peters' lawyer, Brian Henry, threatens to sue Simon Bridges and Nick Smith if they repeat comments about alleged NZ First electoral fraud; Says a loan made by NZ First Foundation to the party was repaid

Winston Peters' lawyer, Brian Henry, threatens to sue Simon Bridges and Nick Smith if they repeat comments about alleged NZ First electoral fraud; Says a loan made by NZ First Foundation to the party was repaid 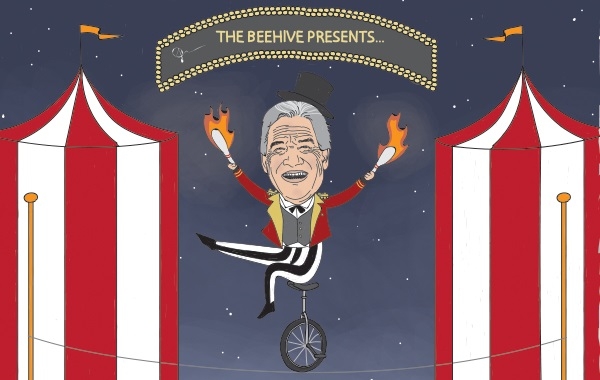 Winston Peters’ lawyer, Brian Henry, is threatening to sue National's Simon Bridges and Nick Smith for defamation over comments they made in relation to alleged NZ First electoral fraud.

Henry, in an email sent to the pair on Thursday, said they made “serious allegations” in Parliament on Wednesday that “there has been a New Zealand First electoral/loan scam”.

“I invite you to repeat what you said in the house in public or apologise.

“Please note if you oblige with this request I will sue you for defamation for general damages together with special damages which from the consequences of your and Mr Espiner’s actions could be as high as $30 million.”

The email has been made public as Smith asked for it to be tabled in Parliament.

Henry went on to say: “There was one loan from the [New Zealand First] Foundation of $73,000 on commercial terms to the New Zealand First party to cover a shortfall after the election 2017.

“This loan was repaid in full over two years. All loan activities are both audited and were disclosed to the Electoral Commission. They are lawful.”

Henry said he attached a settlement statement, but this hasn’t been publicly released.

Stuff on Tuesday reported that it had obtained documentation showing a mysterious entity - the New Zealand First Foundation - was being used to funnel money to the party. The foundation was supposedly used to avoid disclosing donors' identities.

Peters has denied any wrongdoing, saying the foundation is part of the administrative wing of the party, not the political wing, which he takes care of.

However Stuff on Thursday reported NZ First list MP, Clayton Mitchell, acted as one of the "bagmen" for the foundation - somewhat contradicting Peters' argument about the separation of functions.

National has been trying to pin the matter on the Prime Minister on the basis it brings her government and its spending decisions into disrepute.

Jacinda Ardern has distanced herself, saying it’s a New Zealand First matter, being investigated by the independent Electoral Commission.

Robertson responded, "no", before hitting back, saying: "I'm not going to take advice from the National Party about transparency of political donations."

Bridges wouldn't rule out working with NZ First after the 2020 election, but said the donations scandal made it less likely.

Peters, represented by Henry, was in court just last week suing National MPs, Paula Bennett and Anne Tolley, for allegedly breaching his privacy further to details around overpayments of his superannuation being leaked to the media.

He conceded the pair wasn't responsible for the leak, leaving the Ministry for Social Development in the firing line. A judgement is expected next year.

Peters departs for Japan on Thursday and won't be back in the country until Sunday. He tweeted this on Thursday afternoon:

For the first time ever NZ will attend the G20 Foreign Ministers' meeting, held this year in Japan. So we're off to try and sort out the world. When we get back we're going to sort out the media.

Here's a video of question time on Wednesday:

Winston is becoming more and more like Donald in so, so many ways.

Think you'll find with the privately owned main stream media work for National Party interests, and have always done. Look no further than Duncan Gardner & Mark Richardson, who have a high opinion of themselves; ego's the size of hot air balloons. Their moda operandi is "Why let truth get in the way of a good story".

I've personally given up of main stream media; where its job appears to be to confuse the masses with half truths, and find more value is available elsewhere; like interest.co.nz and the independent commentary.

Winston and his mates love to sue.
They should be in the U.S!
No need for a trial, we know the truth but they will just try and threaten and baffle us with BS as usual.

... meebee the Gnats hit a nerve with NZF , to cause their lawyer to come out guns blazing , threatening a $ 30 million defamation case ...

Rather than put the natter to rest , Henry's bellicose squawking has raised interest in this matter to a new level ...

He reminds me of Mr Bridgecorp.When the press asked him questions he always threatened to sue them so they left him alone until all the b/s caught up with him.
Allan Hawkins to a lesser extent,if my memory is correct,did the same thing until, kaboom.

In terms of huff and puff, grandstanding etc, the only lawyer one should be concerned about, in these sort of circles, is one that is representing Bob Jones. He don’t arm the gun with blanks.

Brian Henry is a close friend of Winnies , and called the Voldemort of NZF .... behind his back...

So much enmity between Members of Parliament.

The old teflon Don Winny has lost it.
Everyone can see through his B.S now days.
Hopefully Bridges reply is yes I am sorry and National will never work with Winston and NZF as they can not be trusted.

No need for Bridges to apologise under threat of legal action; it was made under Parliamentary Privilege. So Winston can huff and puff as much as he has, and threaten whatever he likes; it just typical Don Winny in which attack - although without substance - is the best form of defence. So much like Donald.

So why does he still poll at 3-4%? If you imagine an average voter, half of everyone is dumber than that. There are more than 200000 >80 year olds in NZ. 4% of the population. Most of them vote, and a lot of them, stuck with worldviews formed decades back, vote Winston.

Perhaps a change of name is in order, to New Venezuala?

NZ First is stuffed.
If people still vote for them again, they shouldn’t be allowed a vote.
Peters is well past his prime, if ever he had a prime!
He couldn’t win his seat at the last election and yet he is able to call the shots and Ardern is scared to do anything about it.
This government is an absolute shambles and is totally incompetent and has to go for the good of the country’s future.

It certainly feels like the end of NZ as we know it. Economy on the brink, household debts rising and dodgy politicians

Economy on the brink? Where did you get that info from?

And when the Green see a cat? This can be recycled for a tennis racquet.

Winston doesn't really call the shots. He is effectively beholden to these anonymous large donors. A puppet. So they call the shots. I dare say they are behind the legal threats too so they remain out of the public eye.
National and Labour can't afford to throw stones either...

Classic NZ First, when caught out, bluster, threaten and lawyer up.Gets the attention of the 5% they need to avoid getting a real job.
Claim scaremongering, allegations ; claim to have the evidence...
See the Herald for a bit more history
https://www.nzherald.co.nz/nz/news/article.cfm?c_id=1&objectid=12287151

I heard on the radio they got another loan to "pay off"the first loan....

So whoever Winston forms a coalition with is guilty by association? What would you have Jacinda and Bill do after the election? Both told him to go away and make NZ go back to the polls again? Or perhaps a grand coalition of National and Labour?

A careful reading of this article, and taking it at face value, as well as considering that both Winnie and Brian Henry are lawyers and well versed in the intricacies of the law, then it is entirely possible that NZF have not breached any law. Try the following perspective.

We have testimony from others that NZF was pretty much skint after the 2017 election. I think $20 was the amount mentioned. But to side step the law NZF has set up a fund where all (or most) external donations are placed, but not actually used to fund the party. The party is just being run from membership fees and members or just Winnie, paying its bills. When they got particularly broke, they 'borrowed' money from the fund, and then paid it back when they got re-elected, from increased funding received due to being in Government and having sitting MPs. Thus the fund documents will show that it has income, and that it made a loan to NZF, but that loan was paid back in full. The accounts of the fund will show just that and no more. No breach of law!

This fund could actually be quite flush. The rats and mice will be in the Governing documents for the fund which should outline the source of income and the purpose of the fund.

Well, not for nothing did they say..The Law is an Ass.

The bigger issue is foreign interference via donations - but apparently that’s just fine.

donations can be translated from politicianese to english as bribe

What makes you think that this isn't a factor in the case of NZF?

Remember a couple of years back when Winston was dropping clangers supporting mafia-state Russia? Or how NZF killed off the effort to turn the Kermadec Islands into a Marine sanctuary? As kingmaker it seems he is a very cheap way to buy tremendous influence in NZ politics.

I see that a Racing Industry person(G.Chittick) gave NZF 5k and expected NZF to go with the Nats.
I suspect many donors and ordinary kiwis expected the same.

Surely, the fund administered by Brian Henry is not an investment bank, it did not attract funds itself from anyone, (can it show those sources if not NZF?) there were Donations made by the public to NZF then NZF forwarded those funds (a loan? an investment?) to Brian Henry's fund, it is still NZF money obtained as donations to NZF.
Then Brian Henry made the funds available in different tranches as loans to NZF.
This has to be the biggest and clearest example of Money Laundering anyone could devise.
To use it as the basis for manipulating donations to hide the sources and confuse the electoral commission is i would have thought a significant offence under AML.
How were they to pay it back if they were not elected ? Clearly they could not have, and there was no expectation that they would, since it was their own money they were "borrowing"so it would have just been written off by the BH fund.