Prime Minister Jacinda Ardern embraces NZ's inclusion in the 'Indo-Pacific' area, seen to be a counterweight to China

Prime Minister Jacinda Ardern embraces NZ's inclusion in the 'Indo-Pacific' area, seen to be a counterweight to China 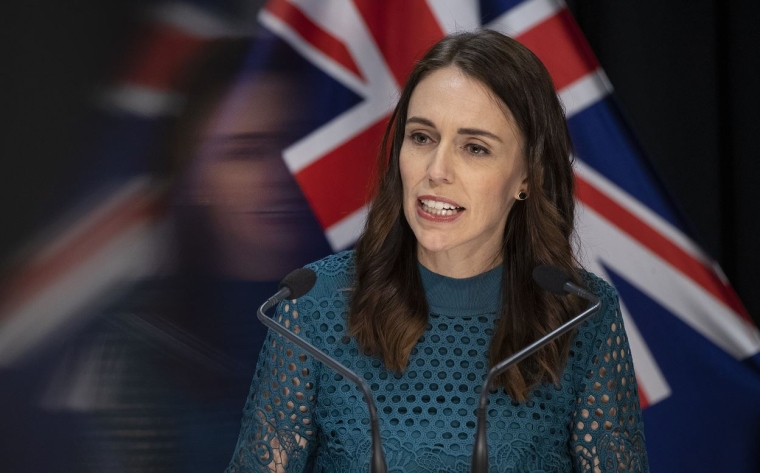 Prime Minister Jacinda Ardern has made it clear New Zealand shares some of the views of the United States, Australia and Japan when dealing with “challenging geopolitics”.

She told diplomats and academics gathered at a New Zealand Institute of International Affairs conference on Wednesday, “We have embraced the concept of an Indo-Pacific as the wider home for New Zealand.”

The comment was significant because it signalled New Zealand is aligning itself with “a larger ecosystem of nations and regions that includes East Asia, the Pacific, the Indian sub-continent and the Pacific Rim” - seen to be a counterweight to China.

The director of the Centre for Strategic Studies at Victoria University, David Capie, said he hadn’t heard “such a fulsome treatment of the ‘Indo-Pacific’ concept from anyone in government” before.

Ardern said: “It is a region where the rules-based international order has already supported huge improvements in human conditions, but is a region of deep diversity.

“China remains an engine of global growth and one of our most significant, but also one of our increasingly complex relationships.

“Australia – New Zealand’s indispensable partner and ally with a strong track record of contributing in the region – sits at the intersection of both the Indian and Pacific oceans.

“The rapidly growing and demographically young countries of ASEAN have 650 million people and a rapidly expanding middle class.

“With all of this regional diversity, New Zealand is not alone in adopting an Indo-Pacific outlook.

“The ten countries of ASEAN plus Australia, India, Japan, and the United States, the European Union, the United Kingdom, and Germany have also referred to an Indo-Pacific region in reaction to more challenging geopolitics.”

“And that’s why we will encourage partners to continue on the pathway of democratic reform - just as New Zealand continues to improve its own political system - to protect the institutional enablers of democracy: free and fair elections, an independent judiciary, a free press, and freedom of assembly and association,” she said.

“New Zealand ultimately aspires for the Indo-Pacific region to become freer and more open. As the region emerges from the pandemic, we hope it will be both.”

Otherwise, China was only referenced when Ardern said: “We also have serious concerns over the situation in the South China Sea, including artificial island building, continued militarisation, and activities which pose risks to freedom of navigation and overflight.”

Ardern used the term ‘Indo-Pacific’ 15 times during her speech.

“New Zealand is focused on protecting the multilateral trading system at a time when it is under stress,” she said.

“Our independent foreign policy has never meant that we pursue our objectives on our own.”

This walking on eggshells around belligerent nations are repercussion of the West dropping the ball on economic policy.
Starting in the 1980s, NZ's economy gradually started descending from post-industrial (knowledge intensive, R&D) to pre-industrial (low-value enterprises, commodity extraction, limited specialisation of labour).

Agree. It's going to be interesting. No nation, or even bloc, has all the minerals required to run alone, so all need others.

Yet that very (ultimate) scarcity, versus their internal promises to 'grow', means they'll need to fight. Wars are almost always over 'rights to stuff', despite how we re-write them.

And in any kind of stoush, we will find we have off-shored the real skills, substituting them with PhD's in coffee-drinking if you can find a park for the SUV. We are about to live in interesting times.

Notably, of all NZ Journo's, Colin James got this look-ahead the best - in his Unquiet Time book. It is well worth the read.

It will be interesting to see if we keep improving our own political system under these conditions. I was quite surprised to read that, must have been happening while I wasn't looking. Last time I looked our rights were being trashed.

Colin James was the most astute observer of the 80s and 90s.

Caught between a rock and a hard place.

"And that’s why we will encourage partners to continue on the pathway of democratic reform - just as New Zealand continues to improve its own political system - to protect the institutional enablers of democracy: free and fair elections, an independent judiciary, a free press, and freedom of assembly and association."

Freedom of speech conspicuously absent there.

If Ardern walked the walk she wouldn't be licking the hunny out of winnie the pooh's hand.

"If Ardern walked the walk she wouldn't be licking the hunny out of winnie the pooh's hand."
That is going to give me nightmares.

I was feeling ill all the way to the last word. "No no no no nono nonononononono...oh. Phew."

Switzerland and Singapore didn't got so rich and prosperous by having aligning themselves to one party. Ideologies can't put food on the table unless it's believers also believe in applying violence to obtain what it.

You seem to be implying that those two economies are prosperous due to their non-aligned stance on global matters; no credit to their high-value diversified export industries and investment stability as corporate tax shelters.

In recent years, NZ has sent more productive enterprises offshore and doubled down on its exports as a food basket to China, which has cost us both prosperity and the ability to hold our ground with our largest trading partner.

the best position for NZ is on the fence.

Clearly Ardern is off the fence and aligning with like minded countries. China is looking like Johnny no friends, the school bully. I wonder what could have caused that?

They've got Pakistan on their side - a close relationship with them can be bought with constant economic bailouts!

No, the best position for NZ is to reduce its economic reliance on China.

One made of number 8 wire, if you get my drift.

CANZUK would be the superior counterweight. A familiar global alliance, and vast shorelines on every one of the world's strategic oceans.

Canada, the UK, Australia, India, the US, Japan. It’s happening already. Just needs the Euro bloc and us.

Ardern said: “It is a region where the rules-based international order has already supported huge improvements in human conditions, but is a region of deep diversity. [my emphasis]
Hmmmm..

The documents adopted at the Cornwall and Brussels summits cemented the rules-based world order concept as a counterweight to the universal principles of international law with the UN Charter as its primary source.

In doing so, the West deliberately shies away from spelling out the rules it purports to follow, just as it refrains from explaining why they are needed. After all, there are already thousands of universal international legal instruments setting out clear national commitments and transparent verification mechanisms. The beauty of these Western “rules” lies precisely in the fact that they lack any specific content. When someone acts against the will of the West, it immediately responds with a groundless claim that “the rules have been broken” (without bothering to present any evidence) and declares its “right to hold the perpetrators accountable.” The less specific they get, the freer their hand to carry on with the arbitrary practice of employing dirty tactics as a way to pressure competitors. During the so-called “wild 1990s” in Russia, we used to refer to such practices as laying down the law. Link

Ngawww cute! now we are a team of 500+ million :) one big happy family to stand up against the school yard bully.

The school yard bully won't give a rats.

The US is a dying hegemon. By attaching itself to a bankrupt nation that spies on its own “allies” and thinks everything can be resolved by military action, New Zealand will seriously harm its economy. When the US puts sanctions on China, it will demand that New Zealand follow along and our economy will suffer.

I agree the sooner we become "Switzerland" and take a neutral stance the better. NZ has nothing to gain and everything to lose by sticking its neck out but even Jacinta can see this. Better we fly under the radar.

What will NZ's position be once the US military redeploy in Yemen, Somalia, Syria, Saudi Arabia and the UAE post Afghanistan? They will ramp up their campaigns in those regions to position themselves to have a crack at Iran. Then who's side will we be on?

Who cares mate all those countries are lost causes. The USA will not be redeploying, they are pulling the pin and are going to protect the homeland. Going forward its going to be high tech surveillance and hellfire missiles from drones that nobody in any of those countries will see coming.

If the US leaves the Middle East, it's game over for US hegemony.

The reason is energy - the reason is oil. Economists may think you can run and grow on magic, but energy is what is needed. And fracking is of such low return, that it isn't enough to support BAU; they need better, for that outcome. So they'll stay until they can't; it's been going on since William Knox D'Arcy.

This was an important speech which didn’t receive prominent coverage on either of the two major news websites. It would be interesting to know what is going on in the diplomatic back rooms, not that we will for a few decades. I’m reading Shirer’s Rise And Fall Of The Third Reich which gives a fascinating window into how geopolitics was/is driven by charismatic, uncompromising individuals.