ANZ National economists said the Reserve Bank of New Zealand (RBNZ) will gain more immediate control over consumer spending and the housing market when it starts to raise the Official Cash Rate off its record low of 2.5% next year. With a "large bulk" of household mortgages to be rolled over in the next five months, the economists argue the proportion of borrowers with floating or short-term fixed rates will rise, as longer term fixed rates have risen above their decade averages. "The mortgage curve continues to steepen, encouraging more people into the shorter part of the curve," the economists said. "With a large bulk of household mortgages up for re-pricing over the coming five months, the proportion on floating or short-term fixed rates will rise. This gives monetary policy a lot of traction when the tightening cycle eventually starts."

The Official Cash Rate has a much more immediate effect on variable and short-term interest rates than it does on longer-term rates. Currently, 23% of mortgages are on floating rates, with a further 38% fixed for one-year or less, they said. "This compares to 15% and 25% respectively in February 2007, just before the last tightening cycle." These figures contrast hugely with Australia, where over 90% of mortgages are on variable rates. This has meant the Reserve Bank of Australia had much more control over the Australian economy than the RBNZ did in New Zealand when the global financial crisis struck in the latter part of 2008. It may be one reason the RBNZ is comfortable reiterating its expectation that it will keep the OCR at 2.5% until the second half of 2010 as it gains more short-term control over spending and interest rates. Here are the full comments from the ANZ National Economists:

The mortgage curve continues to steepen, encouraging more people into the shorter part of the curve. With a large bulk of household mortgages up for re-pricing over the coming five months, the proportion on floating or short-term fixed rates will rise. This gives monetary policy a lot of traction when the tightening cycle eventually starts. Despite the OCR at record lows, the effective mortgage rate faced by households is still higher than previous troughs. In September, the effective mortgage rate (EMR) fell to 7.05 percent from 7.15 percent in the previous month, still above the 6.9 percent bottom at the end of 2004. However, the lagged impact of the RBNZ's aggressive easing is still flowing through, and we do expect the EMR to continue falling towards 6.5 percent, as those rolling off fixed rate mortgages refinance at lower rates. 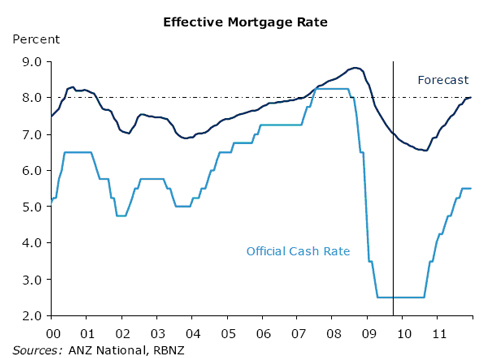 Given the shape of the mortgage curve, more people will opt for the shorter end of the curve. At present, new fixed mortgage rates of 3-year duration or longer are at levels above their decade average, and are therefore "expensive". The 2-year rate is not that much lower than its decade average (around 60bps below). Furthermore, the steepness of the curve, as measured by the difference between the 5-year rate and the floating rate, is the biggest it has ever been at 290bps. Based on our internal data, a quarter of the total fixed rate household mortgages are coming up for re-pricing over the next five months (November 2009 to March 2010). If this were representative of the nationwide total, then some $30 billion worth of mortgages are due to be rolled by March 2010. The weighted average rate of those mortgages is 7.5 percent. For those people, there is not much saving to be had from fixing at 2-years, but reasonable savings are on offer at shorter durations. 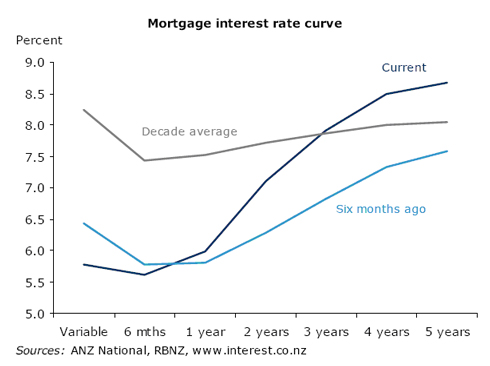 Hence, we can expect a greater proportion of mortgages to be on floating or shorter term fixed rates over the coming months. Currently, 23 percent of all mortgages are floating, and some 38 percent are fixed for 1-year or less (compared to 15 percent and 25 percent respectively in February 2007, just before the last tightening cycle). These percentages are set to increase further, which will give monetary policy more potency. With the mortgage curve expected to stay upward sloping (though it will flatten once the RBNZ starts to hike rates), there is no where for mortgage holders to run, unlike in the previous tightening cycle. Based on our forecasts of the OCR rising from September towards 5.5 percent by Q3 2011, the EMR will rise towards 8 percent. It is not just the level, but the speed at which the EMR changes that will have the greatest impact.

Implications The lags in the monetary policy transmission mechanism are becoming shorter given the shape of the yield curve and with a growing proportion of mortgages on floating or shorter fixed rates. Monetary policy is set to have more potency. This is one reason the RBNZ will have confidence in keeping rates low for a while, to give the economy more time to recover. And it is also why we believe the neutral OCR rate is now closer to 5 percent than 6 percent (regulatory changes to the way banks fund themselves also play a part). The effective mortgage rate is set to fall further, and those who are re-pricing soon will continue to benefit from interest savings. But once the tightening cycle starts, the impact on consumer spending and on the housing market will be more immediate.