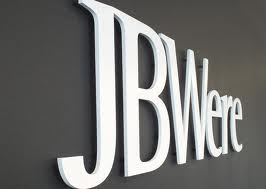 Wealth manager JBWere, which is 80.1% owned by BNZ's parent National Australia Bank (NAB), sees good opportunities in New Zealand including through the government's plans to sell up to 49% of four state owned enterprises through sharemarket floats.

Opportunities in New Zealand include the return of the John Key-led government "signaling that there are going to be opportunities for private investors to access new assets coming onto the New Zealand (share)market."

The National-led government plans to sell up to 49% of Mighty River Power, Genesis Energy, Meridian Energy and Solid Energy and to sell down the government's 73% Air New Zealand stake to as little as 51%. The first sharemarket float is to be of Mighty River Power probably in the third quarter of this year, with JBWere's minority owner Goldman Sachs one of three joint lead managers appointed by Treasury.

"The second thing is we actually think that in New Zealand in particular the high net worth franchise is a real opportunity," Heath added. "Our business is much more than a stock broking business. We offer fixed income, equities, and managed funds."

And the third area of opportunity he sees is "working collaboratively" with BNZ "because no one has really cracked the code of being able to come to a client with solutions for all of their financial needs rather than just the investment side or the debt side."

NZ$8.1 million of losses as integration expenses rack up

Companies Office records show the New Zealand arm of JBWere has lost NZ$8.1 million after tax since NAB bought its controlling stake for A$99 million. The loss does, however, come after NZ$9.8 million worth of integration expenses which the Sydney-based Heath said stem from migrating the business away from Goldman Sachs to NAB by creating separate infrastructure and paying up for "retention arrangements" for key staff.

"Those costs will be in there and will continue to work their way through for a number of years," Heath said.

JBWere announced the appointment of Tom Alexy, an American whose wife is a New Zealander, as its New Zealand CEO just before Christmas replacing John Cobb. Alexy, who has previously worked for Credit Suisse and Merrill Lynch, most recently as head of Asia Pacific investment consulting for Credit Suisse in Hong Kong, has now started at JBWere. Heath said Alexy's appointment doesn't signify any significant change.

Asked what BNZ gets from JBWere, Heath said it gets "a really safe, prestigious pair of hands for them to refer clients into and a good quality client base in JBWere to create opportunities for the bank." A BNZ spokeswoman would only say the bank was working well with JBWere to ensure its clients get access to "their quality investment and wealth offering."

A strategic alliance with Goldman Sachs, through a business and distribution cooperation agreement, sets out that JBWere gets access to Goldman's research on an exclusive basis, Heath said, and acts as the distributor for Goldman's investment banking products.

"{So) if Goldman is involved in privatisations, we will be their access point to private investors in New Zealand."

In Auckland, as well as Sydney and Melbourne, JBWere's staff will continue to be collocated with Goldman Sachs with Heath saying this is an important part of confirming the partnership with the investment banking giant. JBWere also has staff based in Wellington and Christchurch.

The strategic alliance with Goldman runs for five years from July 2009. When it bought the 80.1% stake in JBWere, NAB noted there were additional performance related payments dependent on revenues generated over a period of three years. Heath declined to divulge whether these payments have, or will be made, or how much they might be. He said these were "performance hurdles put in place to reflect the (business) cycle at the time."

"Part of that is the result of having a significant component in fixed income assets which have performed well, plus also through the relationship with Goldman we've been able to create global exposures for our clients."