NZ business confidence weakens in May for first time in 7 months, but views about businesses' own activity still robust

NZ business confidence weakens in May for first time in 7 months, but views about businesses' own activity still robust

A net 27% of respondents expect business conditions to improve over the coming year, down from a net 35.8% expecting improvement the previous month.

"More cautious tones are emanating from some of the survey measures, though from a position of strength," Bagrie said.

Investment intentions fell to a net 12.4% expecting improvement from 18%, while profit expectations and employment intentions were unchanged at 15% and 8% respectively, though down slightly once seasonal influences are removed.

"This is not the stuff of which an export-led recovery is made. Pricing intentions and inflation expectations remain subdued: the inflationary genie is firmly in the bottle," Bagrie said.

"Collectively, the survey responses show signs of resilience in the face of growing concern over the international scene," he said.

"The recovery from the global financial crisis was always going to be a long and drawn-out affair for all concerned. “Solutions” in the form of central bank liquidity are band-aids. A debt-fuelled consumption jam can only be addressed by default (unpalatable), austerity (politically difficult), inflating the debt away (difficult to achieve if no one is borrowing!), repression (e.g. capital controls and interest rate caps, which eventually undermine capital markets), or solid economic growth based on real income earning."

""In practice a combination appears inevitable though the latter is obviously the most palatable. New Zealand is beholden to other nations sorting their issues out but we are also masters of our own destiny. New Zealand is blessed with a huge natural resource endowment – the 8th largest around the globe on a per capita basis. Such a rich resource endowment represents unique growth levers to pull. The sooner we do, the less pressure for austerity." 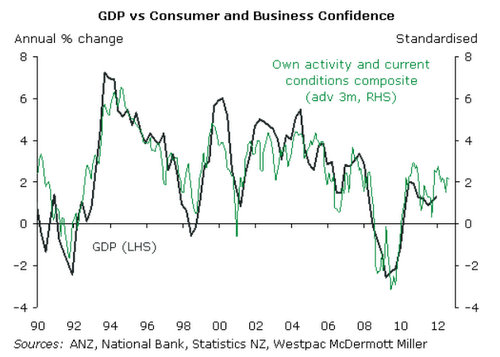 I think even the wider NZpublic is now realising that the country is interconnected to the world – especially financially and economically.

Increasingly bad news on many fronts is reality and should be considered serious.

As the sovereign debt crisis in Europe dominates media coverage of both financial and main street news, Washington’s deliberate cover up of a far more serious threat to the global economy stemming from the continuing crisis at Japan’s Fukushima nuclear power plant (beginning on Mar. 11, 2011) is now seeping out more rapidly from sources outside the captured and complicit mainstream news outlets.

Cautious tones?? ..... no, no can't be right. The NZ economy is poised to take off like a rocket with the chch rebuild pumping billions ......... any minute we,ll need to hike the ocr to 5.0 to suppres inflation, rampant consumer spending etc.... any minute, nek minute massive growth, inflation, hikes etc

More than likely, to cover our explicit credit risk, because our per capita debt (private + public) is higher than it was in Greece before trouble loomed.

I dont understand why you think the OCR will rise to cover credit risk....I would expect to to collapse.  Interesting thing on private debt, how much of it is taken on to dodge tax? of course getting rid of it is a different matter.

Yesterday went to the haircut shop: empty. Then to a menswear shop: empty (been like that all day according to manager). Back @ the office talked to draughting co. owner - he was in worst period of business for 15 years. Weds newspaper - 1 job ad.

There is so much business confidence about.