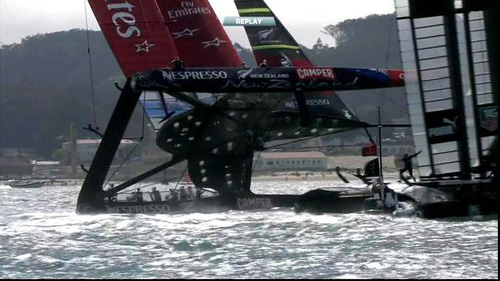 "The economic benefit from our investment in Team New Zealand is considerable. From a $36 million taxpayer investment, the evaluation shows an estimated positive impact of $87 million to the New Zealand economy," Joyce said. (see table below from the report).

Team New Zealand obtained 66% ($118.3 million) of its total revenue of $179.8 million from international sources. Team New Zealand needed to source at least $2 for every $1 of Government support and exceeded that with $3.68 secured for every $1. In total $153 million or 85% of the total campaign budget was spent in New Zealand.

"One of the key benefits of the America’s cup challenge was the lift it provided to New Zealand’s profile, particularly in North America over the period of the regatta," Joyce said.

He said the two reports showed that New Zealand agencies "successfully leveraged participation in the races" to improve international awareness of New Zealand as an innovative place to do business. "The recreational marine industry also enhanced its ability to attract and retain highly skilled and professional workers, wanting to be involved New Zealand’s campaign."

The 212 companies that participated in the NZTE’s America’s Cup business leveraging programme also reported a range of benefits.

"New Zealand design, manufacturing, and technology were on display both on and off the water, and told a compelling story about who we are and what we can deliver. The audience reach of media coverage about New Zealand business was measured up to 86 million," Joyce said.

"Activity during the Cup has contributed to trade and investment deals so far worth $200 million for New Zealand and a further $120 million of new sales opportunities and investor interest."

"One of the things I have made clear to team representatives is that the Government must have confidence that a strengthened governance structure has been put in place before it will consider a further investment of taxpayers’ money in another challenge. I look forward to having the opportunity to evaluate progress in that regard," Joyce said.

" Credit where credit's due " ....that's just  typical of this economy , no one pays their bills on time , they just borrow even more to pay off the original debt ...

I'm sure a lot of this will trickle down to the average Joe Bloggs too.

... I'm sure these yachties will use an epoxy-resin to stop any trickling down to Joe Bloggs ...

The spin doctors are at it again. Let us be generous and assume the return of tax was 5%  say $4.5m. That is a PATHETIC return on $36m spent.
I would bet the IRD could get a return of five times say $180m by chasing, Googles, itinerant overseas speculators and banks for that investment.
But then I am not a PM and hangers on trying to get elected again at any cost.

Actually if you read the report, it estimates that the government got more in tax than it spent in sponsorship, so more like 105%.
I think some of their assumptions might be a little optimistic.

Frankly, being an oldie, I liken this expenditure to Muldoon and Think Big.
Just do it........and hope!

Have you ever heard of the saying you need to spend money to make money?  The govt recovered its expenditure in GST alone. Big diff fence to Muldoons billion dollar bets.
we need an image to sell our products overseas and the money spent on the Americas Cup would buy 10 minutes of welfare.

... we could have a dozen or more American's Cup style investments , to any one of Rob Muldoon giant projects ...

I was in San Fran while the race was on. The profile that NZ got couldn't be bought. It gave us a high tech image. Money well spent and we made a profit on the deal to boot! Good news.
Melbourne loses $50 million per year on a one day F1 race. Compare that.

Quick, send all our assets to these guys. We need a few more losses.
When actually, we need a surplus, we are in so much debt, or some are.
We should have invested more, just think what the benefits if we had won, would have been.
No need for poor starving kids.
No need for money to build houses some cannot afford,  paying it off, over the next 30 years. 7 x salary or more + desperation.
No need for anyone to flee the coop to earm more elsewhere.
The chickens would have all come home to roost.
Everyone would have been a multi-millionaire, if you can believe the stats.
87million divided by 5 million, comes to 17.40 dollars per capita.
Citizens, do you feel rich, well do you windbags.
Pity some will never see the truth of the situation, statistically.
It is a bit rich, that the people who paid the most per contribution, would have been those who could least afford it, tax wise and other wise.
The others avoided the tax.
Statistically speaking.
Distraction is everything.
Spin...well??. thats another story.

Money doesn't grow on trees. You need an internationally competitive product to succeed. We can't compete with low  wage countries in a global market. Therefore we need to promote ourselves as a high value , high tech country and the America Cup,is one way to do this. Unless you want to work for $1 a day.

... fair point ... there does seem to be alot of foreign ( particularly USA ) support for NZ tech companies lately ... XERO , VEND , Pacific Edge , Wynyard ... and the like ... and the yachts themselves were hi-tech .. .. look at all the commercial spin offs from technologies developed during  Americas' " space race " with the former USSR ... is this yachting any different to that , except on scale ( and destination ! ) ...

This is the way to diversify our economy from an over-reliance on soft commodity exports into China ...