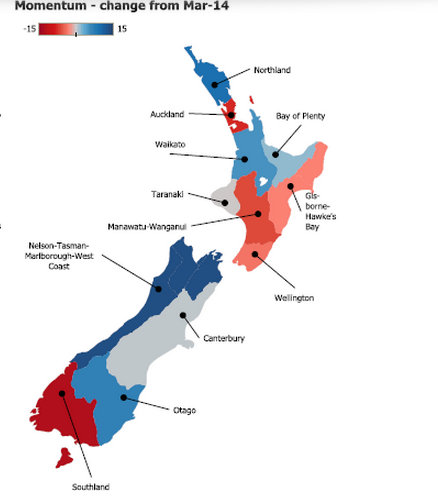 "The momentum has come off in the last few months, but it's too early to call a top," said NZIER Principal Economist Shamubeel Eaqub.

"I think we should hold here to see what's happening with the economy," Eaqub said, adding the Reserve Bank's actions were having an uneven effect on the economy apart from Auckland.

NZIER said the survey found confidence about the rest of the economy fell to a net 33% from a net 50% six months ago.

Experienced domestic trading activity was consistent with a drop in GDP growth in the June quarter to 2.8% from 3.8% in the March quarter.

The NZIER said the economic momentum had eased over the past three months in some regions.

"In rural regions, part of this loss of momentum will be due to softening commodity prices. In Auckland, the driver is less obvious, but may relate to concerns about the housing market," NZIER said.

The survey found a net 23% of respondents increased their prices in the June quarter, up from 16% in the March quarter.

"Firms are beginning to raise prices at a faster pace, indicating CPI inflation of around 2.5% by the end of 2014," NZIER said.

"More firms are reporting capacity and labour as increasing contraints to growing production and sales," it said, adding that the Reserve Bank was unlikely to change its mind because of the results of the June quarter survey.

The closely-watched CUBO (Capacity Utilisation, Business Opinion) measure of median utilised capacity showed an increase to 90.6% from 89.4% in the March quarter.

ASB Economist Daniel Smith said the survey showed the economy was now on a more sustainable growth path of around 3-4% per annum.

Smith said the Reserve Bank's rate hikes were already having an effect on activity levels and the survey suggested inflation was under control.

"The rate of inflation looks like it will increase gradually over the coming year, but businesses are under very little pressure from higher costs at the moment. Despite strong employment growth, the supply of labour is also keeping wage growth contained," Smith said.

"With signs of growth moderating, and the inflation outlook unlikely to be causing much alarm, the RBNZ will most likely start to slow the pace of OCR hikes. We still expect another 25bps hike this month, followed by a pause until late in the year," he said.

"The reality is we’ll need to see a marked improvement in economy-wide supply side capacity for generalised inflationary pressures to remain in check," Smith said.

"The risk moving forward is that more acute pricing pressure requires more upward tilts to the OCR lever than what we expect," Smith said.

"While the idea of a Reserve Bank pause – following a widely expected fourth 25 basis point increase to the OCR later this month – makes for a nice story, it remains to be seen whether the central bank can get away with it. In the end, the Bank will have to do what it has to with its policy rate to prevent inflation from getting away on it. That might yet entail getting to a more neutral OCR sooner rather than later," Ebert said.

"Of course, the market is currently taking the RBNZ at its June MPS word (as are we). Still, it was good to see that the market didn’t swallow today’s QSBO head fake on business confidence. While NZD and wholesale rates tried to go down, initially, it was only in smalls, and was gone by lunch-time," he said.

Westpac Economist Michael Gordon said the QSBO signalled the economy was running out of capacity and firmer wage and price inflation was near.

"On some measures the survey suggests that inflation is moving out of the realm of ‘medium-term prediction’ and is becoming a reality," Gordon said.

"At the least, this validates the Reserve Bank’s decision to raise interest rates in the last few months, and does little to suggest that the RBNZ can afford to relax just yet. We expect a fourth increase in the OCR this month, with interest rate hikes proceeding at a more gradual pace over the next couple of years," he said.

Intermission, time for a costume change.

The Heat Map is a very good way of showing change

This year's farmgate milk price could drop to $6.20 per kgMS and break even price is around $5.8 for an average farm. So, not much left to spend~~~

Hike. Crash. Tentatively rebuild.
Repeat until the population submits to a one city, one product state, under a global authority.