The economy grew 0.4% in the June quarter from the March quarter, which was weaker than the consensus economist forecast for growth of around 0.6%.

The Reserve Bank had also forecast growth of 0.6%, which keeps the pressure on for the bank to cut the Official Cash Rate (OCR) one more time to 2.5% later this year.

It reported that weaker exports, stronger imports and a soft transport and warehousing sector dragged on the result. Growth in dairy production supported GDP in the June quarter.

"Collectively, the service industries were up 0.5 percent in the June 2015 quarter, but it was a mixed picture at the lower level – six industries grew and five declined. Growth was driven by business services (up 2.3 percent) and rental, hiring, and real estate services (up 1.1 percent), but these gains were partly offset by a 1.8 percent decrease in transport, postal, and warehousing – the biggest fall since March 2009," Statistics NZ reported.

Domestic demand remained strong, growing 1.3% for the quarter, with household spending up 0.9% and business investment rising 2.2%.

The weaker than expected result drove the New Zealand dollar down around 30-40 basis points to 63.5 USc.

ASB senior economist Jane Turner said growth is slowing as construction and manufacturing activity plateau, with services having to pick up the pace to provide some offset.

"Within the GDP result there were signs of strong tourist spending boosting growth and robust demand for business services. However, for Q2 this was not enough to return growth to trend – with falls in wholesale trade and transport dragging on overall activity," Turner said, adding the outlook remained fragile given an expected 5% fall in dairy production.

"Although dairy prices have lifted faster than expected in recent weeks, rural confidence is expected to remain low which will continue to drag on investment and consumer demand in rural regions. Adding to the growth risks, wider confidence continues to decline and threatens broader investment and employment intentions," she said.

"We continue to expect the OCR to fall a further 25 basis points, but the timing is a close call between October, our current view, or December, the Reserve Bank indicated at the September MPS it was not necessarily in a hurry to deliver the final rate cut."

Westpac Chief Economist Dominick Stephens said the result was weaker than the market and Westpac expectations, in part because of a balancing 'technical' item.

"For RBNZ watchers, this piece of data leans in favour of the RBNZ cutting the OCR in October. However, other data has leant against an October OCR cut. All in all, October remains a close call."

ANZ Senior Economist Mark Smith said the data confirmed the economy lost momentum in the first half of the year as the rebound from a weak first quarter was only modest.

"With the pending terms of trade hit yet to filter through the economy, the outlook is for sub-trend growth to continue over the remainder of the year," Smith said.

"This underlines the need for interest rate support, and today’s undershoot relative to expectations will keep speculation alive that the RBNZ will cut again in October," he said.

"However, we are not in that camp given our expectation that more timely indicators of activity will improve (while remaining relatively subdued) over the coming weeks and monetary policy works with a lag."

CTU Economist Bill Rosenberg said economic growth was faltering with no growth in per capita terms in the June quarter, given estimated 0.5% population growth overwhelmed GDP growth of 0.4%.

“While there was increased activity in agriculture, that was in the face of falling prices for its products which means farmers have less to spend in the rest of the economy. Manufacturing activity fell for the second successive quarter with all subsectors reducing output other than food manufacturing, which is helped by lower agricultural prices. While a falling dollar exchange rate may help to reverse this, it is not good news for many relatively well paid jobs," Rosenberg said.

“These are symptoms of an economy where the growth has been unevenly spread. There is still high unemployment in most regions of the North Island. Manufacturing has been struggling. Growth has been in areas like tourism where pay levels are low and jobs are insecure," he said.

“The Minister of Finance said earlier this week that immigration levels had kept wage rises down. So have other Government policies. Wages haven’t kept up with what the economy and employers can afford. Market sector labour productivity grew 8.5 percent between 2009 and 2014 but real average wages grew only a little more than 2 percent.”

Output per hour worked in the economy grew only 0.4 percent in the last year, indicating weak productivity growth, he said. 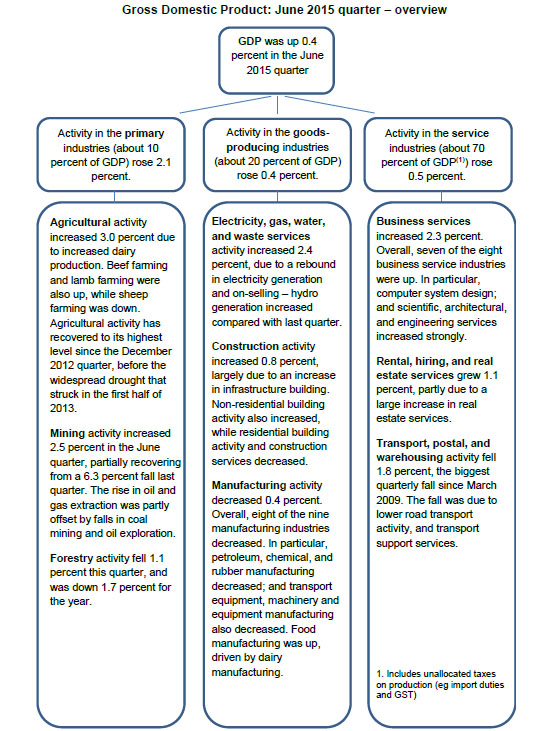 Oh dear. I wonder how much longer the conshooomers (as Key insists on calling them) can keep the service sector propped up for.

as long as they have flat wages but dont actually lose jobs, a while yet.

Nominal GDPE fell back to an annual growth rate of 2.8325% - no where near enough to produce output consistent with servicing and liquidating credit growth up to twice that magnitude depending on which sector of the economy is indebting it self to avoid calamity. View RBNZ stats

How does it play out in the end? Some of the RBNZ charts are starting to look decidedly "2008".

Current account deficit balloons, currency tanks, RBNZ forced to hike? All triggered by a 25bps Fed hike sometime in the next 6 months?

Just go into any retail shop other than Briscoes and ask them how it is going and you will soon find out just how weak the economy is. Anyone who says they are doing fine would have to be telling porkies currently. Go into small provincial town shops and it is diabolical. Something has to happen soon otherwise pressure on benefits is going to rise.

Even Briscoes....you dont need to ask just look at how few shop assistants are on the floor in many shops. As an example the local DSE used to have 3~5 now 2 seems more the norm and even just 1, same at Briscoes, very striking.

"doing fine" there are ppl doing fine where they have an effective monopoly and can increase prices. As an example our software support contracts are 25% of the purchase fee paid every year in USD, (that has changed from 20~22% a few years ag)o and then the exchange rate has crashed as well. It is hurting, but we cant pass those costs on. So we are either cancelling contracts, taking smaller sized ones or going unsupported or just having to cough up in some cases.

"something has to happen soon" it isnt going to get better ever IMHO, so yes I think we'll see the un-employment situation deteriorate and then the Govn's books. Welcome to Peak oil.

On a trip to the North a couple of weeks back there were a couple of towns that were notable for the recent closures of businesses, Wellsford and Kerikeri. Recent as in the last six months, perhaps even the last three.

With all these immigrants our economy should be booming - well that's the story we've been fed.
The reality is we've just had another quarter of declining real GDP per capita, oh dear!
I wonder what polish John and Bill can put on this turd.

Kiwidave, I think John and Bill would assure you that they are "not really too worried about that" and that its all the chicken little's talking down the economy that are the problem.

So we are in per capita recession. Who is paying the price for that?

Certainly not the Epsom set and the Key and Hosking acolytes...

Maybe it's those who lost their minimum wage job to someone on a student visa?

My business I run is doing very well, I am in the supply of chemicals, a lot are commodities, some speciality. Volumes are up, margins are stable, not all bad out there. We run a small staff (myself + 1) and contract out warehousing. Sales are $4-8MPA. A lot has to do with efficiencies. Small office with costs of $20KPA, simple copier for invoices (most emailed now anyway). Old offices in Newmarket were $50KPA costs with expensive copier contract B4 GFC.
I know there are pressures out there as I can see this in my travels. Small towns have been hurt by the Ag downturn, but things will change eventually as a new equlibrium is established.