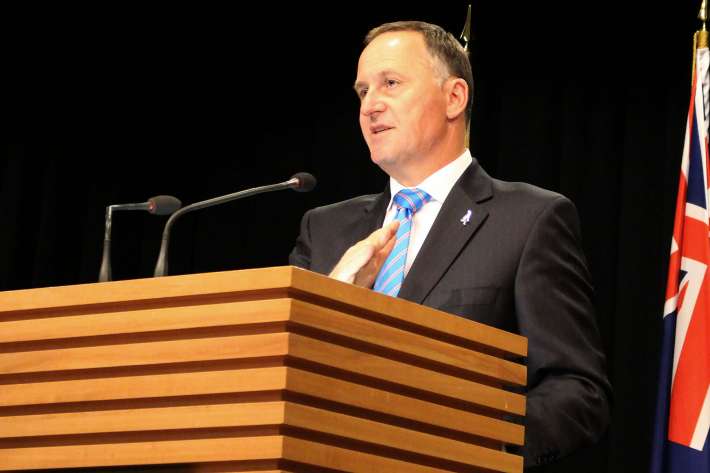 Prime Minister John Key has announced what he called a 'surgical' cabinet reshuffle to replace Tim Groser, who is leaving to become New Zealand's ambassador in Washington, with Judith Collins.

The former Corrections and Police Minister resigned just before the September 2014 election after allegations in an email from blogger Cameron Slater that she had interfered in staffing matters involving Serious Fraud Office boss Adam Feeley. She was subsequently cleared of that allegation in an official report after the election.

Key said Collins had been a good minister and had had a year to reflect on her actions and now was the first opportunity he had found to bring her back. She was rewarded with her 'old' portfolios of Police and Corrections, which had been held by Michael Woodhouse and Sam Lotu-liga respectively, but which Collins had held in National's previous two terms.

Groser will resign from Cabinet on next Monday and will resign as a list MP from Parliament from December 19. He will replaced by the next person on the National list, Maureen Pugh from the West Coast of the South Island.

"I want to congratulate Tim Groser on his appointment as Ambassador to Washington. His experience in the trade portfolio, including the successful conclusion of the TPP negotiations, makes Mr Groser an ideal person to represent our country's interests in Washington," Key said.

"I am pleased to welcome Judith Collins back to Cabinet. Judith has been a competent Minister, and will quickly be able to pick up the Police and Corrections portfolios that she has successfully held before," he said.

Key said he also offered ACT Leader and Epsom MP David Seymour the ministerial positions of Minister for Regulatory Reform and Associate Minister of Education, but Seymour had declined the offer so he could pursue his member's bill on End of Life Choice through Parliament, which he could not do as a minister.

Groser is replacing former Labour Prime Minister Mike Moore, who is retiring after a stroke.

I seriously suggest putting in a few hardened business men behind the scenes who know what is at stake.

Our interest seems to be in decline.

Nor has any Corrections been undertaken, just farmed out to Conglomerates to make a quick buck and to have a punch up over in house.

And Collins dictionary appeal does not bring much to the the same old way the story has unfolded. Once bitten twice shy.

I would suggest a few Hand Picked Old Rugby players might bolster the appeal. But as usual, they have a buck to make elsewhere.

Richie could even work for Helicopter Ben, in their new capacities. But I digress somewhat.

I think the next story on the Agenda is to allow a second story on all Awkland Houses, starting with the PM's abode..Take in a few Refugees and their Families, uncles, aunts, defactos and associated members of the Aristocracy. We might as well have them here permanently as we have paid through the nose to house them royally in the past. I know they have been a distraction in the past, but we could flag that change now, if they were all here. Why waste money on another story, when the extras storey could house the lot of em for the same or cheaper cost. And the Royal Standard could become a New Zealand standard, all change, no change, saving heaps.

Prince Charlie could busk and Prince William join in with Richie and Ben and we could really make some money.

Would make another welcome distraction, we could all pay for...eh.

Many, many, many times over.

Or we could build sensibly priced houses, if we got rid of the lot of em...but I digress as usual.

Judith Collins to return? a hard right winger and seems questionably dishonest, kind of a bad look if so.

A bad look but she fits right in. I voted National but no longer believe their brief is to serve all New Zealanders.

Oh good, now NIcky Hager and any serious journalists can go into hiding. Maybe bring in Cameron Slater for double payback via the police? Just to look at her tells the story.

It is a shame Key doesn't reshuffle and surgically remove at least half of the Bureaucracy..............Start with the IRD and its "making tax simpler"....who the hell has time to read the library of works these guys publish annually?......and to think the IRD are looking for meaningful comments and ideas....the NZ bureaucracy and National are doing everything they can to destroy small operators in business.......the entire bureaucracy is churning out millions probably billions of pages of documents annually..........the size and cost of the bureaucracy is a climate change disaster.......Across my desk this morning is volumes of crap from NAIT (OSPRI), Health and safety (Work Safe) crap for Africa....IRD crap that fills volumes.......then there was a heap of crap from the NZEUR.........then there is the Dunedin City Councils district plan crap that I am meant to read and make a submission on because those idiots are trying down there don't seem to have a clue on constitutional issues (like the rest of the bureaucracy) and want to impede business at every possible turn!!

well stand for Parliament, form your own libertarian party and have a policy "abolish IRD and tax"

see how far you get.

How about people like you, do a decent days work and fund yourself instead of making a 3rd party (bureaucracy) steal off other people for redistribution......

I take it you - Don't want equal rights for ALL?? NZ is a soft touch for socialists from all around the world......I think the definition of a socialist should be : People who pretend to advocate for a better life/standard of living for others but there true interest is lining their own pocket at someone else's expense.

Don't you have some climate change to deny? Oh wait you don't mind passing on business cost to other people just not the profits.

I would suggest your comment PE would be somewhat similar to someone who puts their Y-fronts on back to front and then wonders why their undies had failed them!!!

yep, blames someone else for her own failures and incompetency.

Funny but you are full of cr*p.

Agree with most of the comments above, but wouldn't want "a few hard nosed businessmen" in Government. I think they are already have JK in their pocket. This Government does seem to have forgotten that it is supposed to serve the people and while the Regulatory Reform portfolio is supposed to reduce red tape, there is clearly a need for some regulation that the Government just will not visit and Kiwi's and are suffering as a consequence. There will be long term consequences.

Asianic whispers are not my forte, anymore.

Is the second coming of J C a diversion ...?

No, no.
J C is essential as she makes lotsa noise.
On the other hand when JK has such limited talent, he has to try to show some decision making aptitude.
E fail yet again.