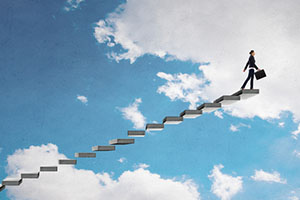 The QSBO, which is the longest running survey of business opinion, is closely watched by the Reserve Bank for signs of economic activity and inflation pressures. The survey indicates the economy finished 2015 on a much more positive note than some had expected, suggesting stronger inflation pressures that may prevent the Reserve Bank from cutting the Official Cash Rate again in 2016. Two of the big four banks' economists have previously said rate cuts were necessary to get the annual inflation rate back up from its current 0.4% to closer to the mid-point of the Reserve Bank's 1-3% target band.

The QSBO's measure of actual trading activity in the December quarter showed a net 25% reported improvement, up from just a net 6% in the September quarter. An actual net 22% expected better activity in the next quarter, unchanged from the September quarter. But the seasonally adjusted measure of domestic trading improved to a net 18% reporting improvement, up from 12% in the previous quarter. The seasonally adjusted measure of the net percentage expecting their own businesses to improve rose to 20% from 18%.

The survey's measure of capacity utilisation rose to 93.2% in the December quarter from 92.3% in the September quarter. This was the second highest on record, but inflation pressures remained subdued with businesses unable to pass on their increased costs.

The survey found a net 3% were able to increase their prices in the December quarter, which was better than the net 6% who said they had to cut prices in the September. But this was still well below the 18% who reported their costs had increased in the quarter. The result was a net 4% who said their profits had deteriorated in the quarter, in line with the net 3% who saw profits falling in the September quarter.

NZIER Senior Economist Christina Leung said the survey showed demand had strengthened across all sectors of the economy, but that inflation pressures remained weak.

"Businesses are finding it slightly easier to put through price increases, but still not by enough to keep pace with cost increases," she said.

"Although inflation is subdued, we expect the Reserve Bank will keep the OCR on hold over 2016 in the face of solid economic growth."

Government architects were particularly busy and confident. A net 31% said they expected to do more work in the next 12 months, up sharply from 11% the previous quarter and the highest level of confidence since the March quarter of 1985.

ASB Senior Economist Jane Turner said there was still evidence of fragility in the survey which reinforced the risks to the outlook. She pointed to investment intentions remaining low, with a net 10% expecting to invest in machinery, down from a net 11% in the September quarter.

"We also expect the lift in inflation pressures will be merely transitory, as they reflect the fall in the NZD over the second half of 2015," Turner said, adding that ASB still expected two more OCR cuts in June and August this year.

"The level of pricing intentions remains modest by historical experience and suggests that underlying inflation momentum is unlikely to lift enough for the RBNZ over the coming year. Reported cost pressures remained broadly steady."

ANZ Chief Economist Cameron Bagrie said the survey showed a broad based improvement and was consistent with ANZ's own Truckometer and Business outlook surveys showing an economy headed back towards 3% annualised growth.

"Overall, we see this survey as marginally positive for the NZD and consistent with the RBNZ being on hold, with a reasonable hurdle for it to return to the rate-cutting table," Bagrie said.

"That said, the New Year has obviously gotten off to a rocky start and so our own Business Outlook survey in February and consumer confidence numbers this week will give more timely steers. The risk profile for the OCR is still skewed lower and it is global factors that will hold sway," he said.

Westpac Senior Economist Michael Gordon said the survey showed an improvement in business sentiment, but he noted that the turnaround in pricing pressures was largely in the services sector.

"Pricing was only slightly stronger for retailers and was down for manufacturers, which doesn't suggest much in the way of pass-through from the fall in the New Zealand dollar over the last year or so," he said.

"We still expect the lower exchange rate to have some effect on tradable goods prices over the next year. But with world oil prices plunging for the second time in two years, it now looks likely that headline inflation will remain below 1% for most if not all of 2016."

First NZ Economist Chris Green said the December quarter survey would not have reflected the sharp volatility seen in financial markets since the New Year.

"While our central scenario continues to be for the OCR to remain unchanged at 2.50% over the remainder of this year, the recent global backdrop of heightened financial market volatility, further declines in commodity prices, renewed concerns about the Chinese economy, together with a muted domestic inflationary environment, continues to skew the risk distribution towards a lowering in domestic interest rate settings over the year ahead," Green said.

BNZ Senior Economist Craig Ebert said the QSBO was consistent with the Reserve Bank holding the Official Cash Rate for the foreseeable future.

"The NZIER survey will certainly give the Bank some confidence that the economy is actually doing well, after giving a bit of a head fake to the south last winter," Ebert said.

"Inflation isn’t there yet, at least in a headline CPI sense. However, core pressures appear to be holding up, and seem more inclined to edge up over the near term, than dissipate," he said, adding however that the survey does not include agriculture and dairy in particular, and does not account for the worsening of the global financial and economic backdrop since the New Year.

(Updated with more detail and reaction)

"Businesses are finding it slightly easer (sic) to put through price increases, but still not by enough to keep pace with cost increases," she said.

Are these cost increases acknowledged by the authorities and included in official historical statistical wholesale inflation calculations or just anecdotal supposition?

OMG there is nothing meaningful in this survey nonsense....the RBNZ is clutching at economic improvement straws and lumping the whole of business together when it takes notice of this survey.

The percentage of people who suck a life off an exporter is the key!!!

Do survey results on expectations actually affect the reality of what is actually happening/about to happen in the general economy?
Most Government departments, hospitals, education institutes, etc will be cutting spending 2016 & jobs due to the Govt cap on spending. Interest rates are still high. Regions are in decline. AucklNd overwhelmed by immigration and foreign buyers. SMEs in the general economy struggling.
But if the survey says it's all good then ....

I doubt they do, but unfortunately politicians use them to prove / disprove what is being said. I have actually heard JK refer to the PMI as proof exporters are doing well.

Given how utterly clueless many ppl seem to be sometimes, add in some ppls right wing political bias means they blindly follow broken economics models (if any) and then how inward looking (ie ignore the world stage) many seem to be, well then, no.

That should tell you that there are contrary stances to the above "mainstream" that offer opportunities, or at least less losses.

If things were going well for our economy the ASB Economist wouldn't be predicting two more OCR rate cuts this year.

RBNZ won't see the need for an immediate cut by the way they operate, but that's driven by the fact that they still aren't regulating mortgages enough to not create a bubble.

Inflation is at 0.30%,while the RBNZ's target is between 1%-3%,over the medium term.China is slowing quickly,dairy prices are still falling,our interest rates remain high compared to other developed economies,there is little wage inflation,retailers struggle to raise prices;need I go on.
There will be further cuts in the OCR this year.