Fixed mortgage rates are low but they could go even lower as wholesale rates fall to record levels. In the meantime bank margins rise to top of the recent range

Fixed mortgage rates are low but they could go even lower as wholesale rates fall to record levels. In the meantime bank margins rise to top of the recent range 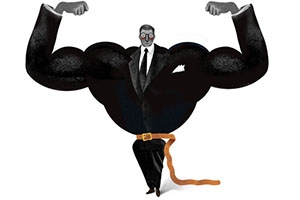 Bank margins to swap are rising.

They are doing so because wholesale swap rates are falling and banks are not following them down with their rate offers.

A sharp rise in June and July 2015 was followed by a correction when banks moved to pass on the reduced costs.

That has not happened this time - yet.

Over the past 15 months, banks have been living comfortably at or about a 2.1% margin-to-swap as the chart below shows for fixed two-year terms.

With wholesale rates at record lows you would expect fixed mortgage rates to be down there as well. But they aren't.

Demand is brisk enough for banks to set their carded rates to return enhanced margins.

It has been 'usual' for borrowing demand to have a seasonal pattern, falling away after the prime Easter selling period. But that did not happen in 2015 and appears to not be happening again in 2016. Demand for 'new' mortgages remains brisk, allowing all nine retail banks to participate profitably in this market without sacrificing margin.

In fact, this seems to be a period when margins are being enhanced. 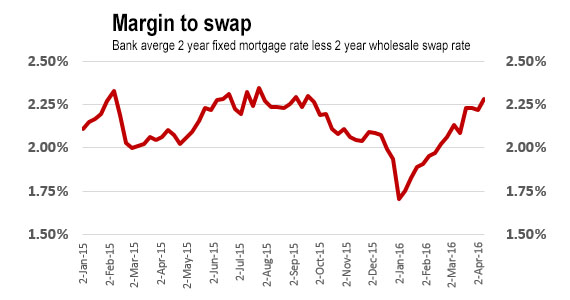 One thing that will be going on however is rising flexibility to negotiate. Bank loan officers will have wider discretion and savvy borrowers with good financials will be able to win fixed rates below carded rates.

But the temptation for one bank to reduce its carded offers will be rising. One or more will be tempted to break ranks, you would think.

However, some banks do have practical limits on how much new business they could digest. Kiwibank for one has well-known issues with its limited capital structure. But with the NZ Super Fund and ACC backing they may well come to a time when those shackles are less restraining. However that day is not imminent; their deal has not yet been finalised, having so far merely been publicised.

See this page for all banks' carded, or advertised, mortgage rates.

Whilst I'm all for a free market and don't see government intervention being required in forcing banks to set mortgage rates...can I politely ask - WTF?!

Surely, if there was true competition between banks would they not be undercutting each other on rates to levels which squeeze their margins just a tad bit more?

It's not a free market, it's a rigged market. It sounds like a contradiction, but we are not going to get a free market without the government being a strong referee. Government should not become involved in setting the rate on a daily basis.
What government could do though is break the cartel. Probably by Trustbusting and breaking the big four into the middling Twenty.
Much harder to manage a cartel with a group of 20.

"Free" means free of regulation. Milton Friedman should be hung from the nearest lamp post for what he unleashed. What he failed to identify, and what governments who have subscribed to his theories don't want to admit is that the major players will and do rig any and all markets in their favour. Sometimes very subtly - the TPPA is a good example. We need to move away from the Free Market dogma.

Murray 86. I don't agree. You can prevent markets being 'free' in many ways and regulation is merely one of them. Cartels have lots of methods for supressing free markets and indeed it is their reason for existence.
Free markets can exist, but they don't happen naturally. They need to be fiercely protected and that can only be done by Government.
Problem is the lobbyists have the right government players on speed dial.

Well thats what happens when you sell all the major banks to Australians. Have hardly ever delt with an Aussie that wasn't trying to screw me.

While I agree with the general thoughts posted in the article there are so many variables that arent really covered, and do make a material impact. [EDIT: ABSOLUTELY push banks for a better deal.. but then that is the same with everything in life.. there is generally always a better deal if you ask for it/do your homework]
- Wholesale funding costs have increased materially and are forecast to increase further. I will note that these have not gone up nearly as much as wholesale rates have dropped, but this factor has not really been covered. These do cloud the picture though when looking back at the past (ie mentioning pre GFC levels of 1% is misleading as there was no cost to raise funds, now these sit at around 1% making a 2% figure approx like for like)
- Incentives. It is still very common to get a 1% cash back, with the lock in period ranging from 2-4yrs. This is a 0.25-0.5% margin cost that was a lot smaller in the past.
-Regulation. Higher capital against mortgages will be coming like in Australia, where although rates havent changed, floating rates have been moving higher. Not such a worry now, but one to watch.

As I have said before on this site, the NIM (net interest margin) banks make here compares well globally (well within the bottom 50%), and also below our Ausie counterparts. Arguments can be made that depositors are not rewarded for the risks that they are taking but from a borrowers perspective we arent doing too badly. While this NIM would have moved higher over the last few weeks, as the article is roughly referring to, i think too many people reading this will only be getting part of the picture.

..i think too many people reading this will only be getting part of the picture.

The recovery of a financialized economy has to be determined by banking whereas in recovery banking is secondary; loan growth is not the predicate for capitalism but its byproduct. Read more

I'm amused by the article pointing out that a financialised economy is a cargo cult based on capitalism.

Monetarism needs to be eliminated as an economic religious belief.

Agreed. It would be good to see some of these other important factors (especially those credit spreads, which are not included in the base swap rates) reflected in this type of story so we can have a more informed view of the trends

You can find a rough proxy for credit spreads here (the numbers are only an index however; all they show is whether they are rising or falling).

This Australasian Index is not only of spreads for banks. There are about 25 investment grade debt instruments in there, with only about 6 or so as banks. Miner debt dominates. So that is why we say it is only a rough proxy.

Specific bank-related data is hard to come by. Some recent anecdotes on covered bond spreads suggest they are quite low these days.

Demand is currently so strong for mortgages that the banks can get away with duping idiot Kiwis who think this is cheap money when it should be even cheaper. Borrowers should be protesting with regard to the greedy bankers extending their margins where they are already making billions every quarter. Majority of people just accept and pay the banks carded rates yet if you negotiate hard you can obtain a 1% discount on floating rates and around 4% for 2 years fixed. Don't let these banks shaft you with a high carded rate. As the tables above show they are at the greediest money sucking margins right now

Can we be sure the reported domestic wholesale swap rates are not manipulated (or lacking in opposing market maker liquidity) to achieve the required overall profit outcome, in addition to the premium lending markup?.

The tables above do not show the actual net interest margins of banks, because banks don't borrow at the wholesale swap rates (or the OCR for that matter). Most of the counterparties who lend money to banks charge a premium over and above the swap rates, so you can't tell from that data alone whether margins are increasing or decreasing.

The banks borrow cheap money offshore at 1% to 1.5% and offer term depositors 3.5% then on lend at a 1% margin for mortgages and of course the interest rates they charge on credit cards, personal loans etc are simply obscene!

The banks borrow cheap money offshore at 1% to 1.5%

The common terminology is to quote an indicative NZ basis point spread cost to the domestic 5 year swap rate, currently around 2.47%. Figure 3.11, page 21 (23 of 65) from the latest RBNZ Financial Stability Reports suggests ~100bps. Given recent anecdotal comments one could infer the credit spread has widened more in recent months, given ANZ's poor share trading record.

Where do you get that information from? Banks borrow from a range of sources at a range of terms and then have to land that funding back into NZD. I find it hard to believe that any NZ banks are borrowing offshore at 1%.

REINZ median prices across Auckland city have rebounded and shot through $800k for the first time, to a new record high of $820,000.

How much higher will these house prices go when fixed mortgage rates head down to 3.5%

If the govt left the $ 350 millon , it will take out of kiwibank , in(instead of taking it as a dividend from Nz Post), and got ACC and Super fund to match it , then we would see some competition. .

Talking of testing the limits: On a much lighter note....

Anyone seen this yet? Makes the Martin Jet Pack look cumbersome.

This falling interest rates is crazy , crazy , crazy our lifetime's cash savings are worthless .
The damage being done to the Boomer generation who are saving for retirement , and the elderly is alarming .

The Govt also needs to understand some fundamentals about national savings , firstly that the savings of today are the capital of tomorrow , and secondly to discourage saving is foolhardy , the state earns around 25% of all interest income generated in withholding taxes by Banks , Govt needs the income