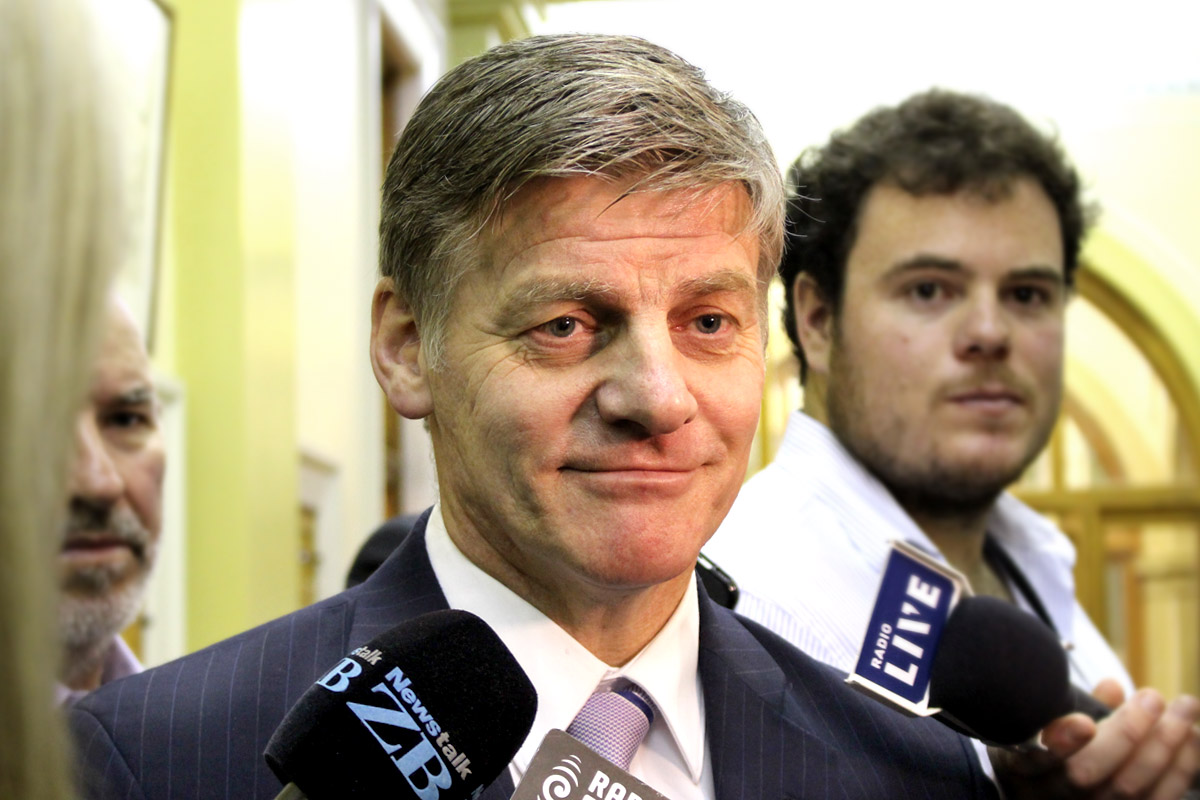 Finance Minister Bill English has unveiled an improved set of Budget surplus forecasts and plans to increase capital spending allowances by NZ$5.4 billion over the next four years.

Speaking on the eve of a National caucus leadership vote next Monday that is expected to make him Prime Minister, English said he was in active discussions with Housing New Zealand about its capital needs for ramping up its house building programme in Auckland. He also named Steven Joyce as his preferred Finance Minister.

Here are the key details from the release of the Half Yearly Economic and Fiscal Update (HYEFU):

1. Treasury forecast an Operating Balance Excluding Gains and Losses (OBEGAL) surplus of NZ$473 million in the current 2016/17 year. That was down from the Treasury's May 2016 forecast for a surplus forecast NZ$700 million because around NZ$1 billion worth of Kaikoura earthquake rebuild costs more than offset the effects of stronger than expected economic growth. Treasury forecast OBEGAL surpluses would build to NZ$8.5 billion by 2020/21.

2. Treasury ramped up its forecasts for economic growth and migration in the years ahead, which increased the expected nominal GDP by NZ$23.7 billion and expected tax revenues by NZ$6.6 billion from Treasury's May forecasts over the next four years.

4. Treasury forecast net Kaikoura earthquake costs of NZ$1 billion in 2016/17, with costs to the Government over the forecast period of NZ$2-3 billion.

6. English said in his Budget statement that quake repairs and debt repayment were a higher priority than tax cuts, and that any tax cuts would be aimed at low to middle income earners.

7. The New Zealand Debt Management Office (NZDMO) increased its gross bond issuance plans for 2016/17 by NZ$1 billion to NZ$8 billion, with plans for a 2040 bond that was inflation-linked before the end of 2016/17.

Rock Star economy still in tact. Most Governments have massive debt that they can't prevent from increasing due to globalisation and aging demographics.

Nz debt Govt and household have both ballooned in the last 8 years .

Rockstar with debt fueling the party and leading to a rockstar hangover ....

We need a change maker

NZ govt debt is actually quite moderate and considering we are in the worse financial mess since the Great Depression not that bad.

Private debt is simply crazy though, the Q is can the Govn keep it out of the public purse or not.

Isn't that because the borrowing has shifted onto the taxpayers.?. So as a result we have some of the highest private debt levels in the world fuelled by an overpriced housing market and high building costs, led by high material , land and construction costs. Debt is debt. Maybe it will inflate away somewhat, but to do that wages need to grow substantially, but where is the money coming from to increase wages, especially as people are demanding cheaper and cheaper goods

It doesnt seem to matter if its private or govt - it seems in event of defaults, the tax payer will ultimatley pick up the tab..

2. Treasury ramped up its forecasts for economic growth and migration in the years ahead
....
so gdp will rise but gdp per capita will stay flat as productivity gains allude us and our quality of life falls
http://imgbox.com/hPbuHrAE

Yeah jh. More of the same, our growth industry is selling off our low population statistic. Quality of lifestyle eroding away, the countries productivity being shared out amougst more people means less for everyone, pressure on the environment, so much for lowering our carbon footprint the Auckland traffic jam just gets bigger and spreads to other cities.
Just 2 weeks ago National said we need to spend over one hundred billion dollars to catch up on infrastructure for the population growth. No mention of that slight financial liability.

come back John! we miss your sugary smile and fairytales about tax cuts and cycling into the sunset,dont leave us with the brothers Grimm.

bob, worry not. put the money on JK coming right back as a PR/Lobbyist/media johnnie.

Here we go, hold on to those seats, anything to keep the high immigration Ponzi going
heres a novel idea, cut it back to 25K per year and let us catch up through normal process rather than borrow as interest rates around the world start rising

We've got lots more people so we need to spend a lot more, can't afford tax cuts. You lot can wait. No mention of the current account deficit and that as a nation we keep getting poorer (ie more deeply indebted) year by year. Shades of Michael Cullen, methinks.

In summary, Bill i think this is what im hearing
- the latest earthquake wherever it was caused any missed forecasts ... but conversely they are the backbone of our growth bonanza story. If anything, we need more
- we should up the immigration .... its nothing short of an economic miracle
- we will spend about what we got for selling infrastructure ... on infrastructure
- oh and something about some blow out in govt debt

I see they announced an expansion of the Investor Class Visa yesterday. Going up from 300 to 400 per year with an increased $ threshold.
Should keep the higher end Auckland property market alive. Not so sure that the lower end will hold up though now the banks funding costs have sky rocketed.

More on infrastructure is good, even if the amounts remain less than bold. Government borrowing Interest rates are likely to remain very low for years, so it would certainly makes sense to try and get housing and transport in particular up to first world standards. Bill took a few years to get to that message, but he has apparently got it now, which is good. Self centredly I will look for Auckland transport to be addressed as well as housing.

I wonder if this is partly why Key resigned , English was always lukewarm on tax cuts, and now it seems others in the national party were too,

Key resigned because he knows the deficit of infrastructure for Auckland's population growth is the biggest unfolding financial disaster this country has ever seen!!!!
He sails off heralded as the hero of the nation squeaky clean. Meanwhile back in kiwiland we have Billy Boy filling the country up with people in a deluded frenzy of selling our housing and productivity to the highest bidder, kidding himself and 1/2 the population that the cash flow of incoming foreign money is an economic miracle.