Support for Labour/NZ First/Greens Government up from October, with government confidence the highest it's been since the start of the Key era, according to Roy Morgan Research

Support for Labour/NZ First/Greens Government up from October, with government confidence the highest it's been since the start of the Key era, according to Roy Morgan Research 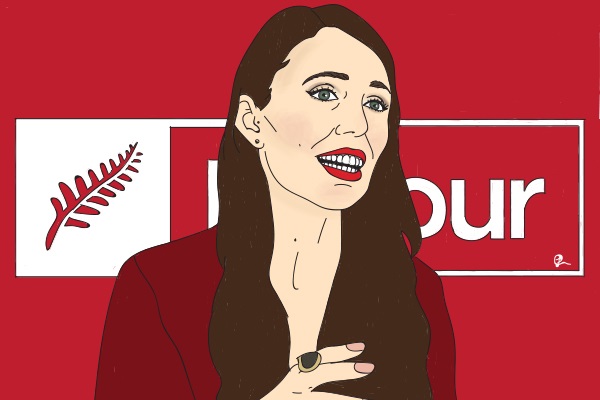 Support for the Labour/NZ First/Greens Government has increased 6% since early October to 54.5%.

Meanwhile support for a National/Act Government has slumped 5.5% to 41%.

The Roy Morgan Government Confidence Rating has jumped 15.5 points to 146.5 points - the highest since early in the John Key era in January 2010.

“Jacinda Ardern was finally declared the victor of New Zealand’s tight election in mid-October when NZ First Leader Winston Peters announced his party would form Government in support of Labour rather than the existing National-led coalition.

“Since Peters made the announcement, just over a month ago on October 19, Ardern has stepped into the role with consummate professionalism and already embarked on several key overseas trips to Australia, Vietnam and the Philippines.

“As is customary Ardern’s first overseas trip in early November was to Australia to meet Australian PM Malcolm Turnbull and from there it was onto the APEC Leader’s Meeting in Da Nang, Vietnam and from there to the East Asian Summit in the Philippines at which Ardern met world leaders including US President Donald Trump, Canadian Prime Minister Justin Trudeau and Chinese President Xi Jinping. 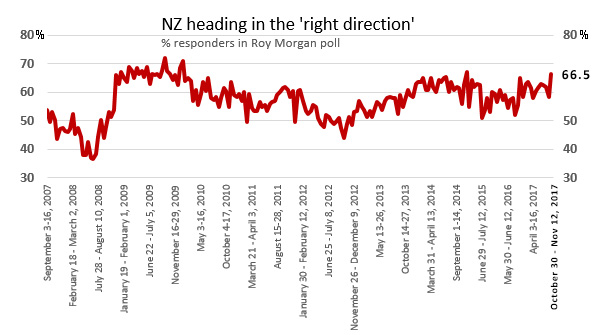 Wonder what the Hosk and the flock will make of all this. Perhaps something about the honeymoon period.

Sshhhh!
They feign disinterest I suspect.

For real, who in the world cares about TPP or CPTPP now? A trade deal without China and US?

Go ask MFAT officials what their thoughts are on this.

You are complaining that the new Government hasn't signed a trade deal including the US and China in their first month in power? Tough standards.

It's far more likely to actually be a free trade agreement and less of a power grab for large corporations.

Labour have already signed a FTA with China!

Ha, Canada has well and truly kicked any deal into the seriously long grass.

What’s Canada done ? I’m not hearing anything but NAFTA
This is their biggest trade deal so TPP is not their prime focus right now

This is flawed reporting. Comparing opinion polls and election results is apples and oranges, Labour Greens always do better in poll than elections.

This poll is basically unchanged from September?

This is flawed reporting. Comparing opinion polls and election results is apples and oranges, Labour Greens always do better in poll than elections.

It's reporting on a single time-series data set. Nothing flawed about it at all.

I think his point is that it isn't a single data set. It should be compared to previous polls by the same pollster, not the election result.

For the record, my only interest is the data side and that he makes a valid point data-wise.

Nope. It is a simple descriptive read of the Roy Morgan Government Confidence Rating. Looking at changes relative to points in time (such as change of govt) is "directional" (research speak).

History suggests Labour always has the highest house price increase so they will gain more popularity from relieved National voters.

Cullen will create a rental crisis with his tax regime whilst Landlords surrender to the bullying and sell up leaving tenants on the street.

Heralds new beat up will be "Rental Crisis" Familiy tenants living in cars, "Are there any landlords out there willing to house these people at a financial loss please?"

Robert Redford, present day poll suggests there is increased confidence that Jacinda & Winnie are in control - country heading in the right direction. Suggesting that this heralds another rental crisis sounds a bit like a thinly veiled wish by a Landlord hoping for a green light to raise rents. Aren't Landlords providing a public service anymore? Tenants will only pay so much before they become resourceful in other ways. Property party is over sorry, pity party coming.

From your analysis of historical house price rises, what did you find is the statistical power of the link between the party in Government and the magnitude of price rises? Was it statistically significant? Do you have good reason to believe this will persist into the future?

The new tax regime won't be brought in unless the public votes for it at the next election. Hopefully by then we'll have immigration and housing supply more under control and there'll be less risk of a rental crisis. I do agree that the previous Government has left us rather precarious to a variety of crises though.

This is an outrage - apparently they sold up and then the house simply vanished!!

This fellow Cullen should most surely be held to account and resign immediately!

Yup those landlords and their scorched earth policies, so vindictive to burn the house down rather than sell to a FHB who is currently renting.

What are the three most important areas you should focus on to make sure NZ remain one of the greatest nations in the world for next 50 years? And, how do you proposal to achieve that please?

You may have better results directing this to your local MP or the PM, rather than throwing it into the comments section here.

xingmowang, I suggest by writing a letter to Parliament Buildings, Private Bag, Wellington, might get a favourable response?

I think it's freepost too.

Answer TAX TAX and more TAX is the secret to New Zealands economy being the greatest and Smile just Smile and you can win any election even if you dont have the votes!

First home buyers wanting to live next to their parents in Remuera can get a bargain price!

Robert Redford, have you considered conditions might be better for you in another country? Keep an open mind.

Out of interest - are you a landlord? You seem to be oscillating between praising house price rises as beneficial to hard working owner-occupiers, and complaining about landlord targeting. You're not trying to use the plight of owner occupiers to justify an increase in your portfolio value, are you?

Give up Rob Red , All Is Lost, Ordinary People can see you have made an Indecent Proposal and The Clearing (of 2017) means Up Close and Personal dairy farmers who have A River Running Through It and slum landlords who have got a letter showing "This Property is Condemned" should be nervous.

Meanwhile hurrah - Mugabe is Out Of Africa.

I'm out - Rob's insightful analysis has left me exhausted.

Have you seen this - there was a lot of shady deals done during the Nats time?

So what? He got away with it after all. Don't know there was a statute of limitations on this. Haul him back, I say, to prove the principle really stands.

the whole saga smells,
why did solid energy buy the mine at a time they were already in trouble?
where they directed to by there shareholder so they could shut it down

Of course they were bloody directed, I can't imagine anyone would have wanted to freely go anywhere near it otherwise. You cannot help but think the whole process was a cover-up, as no other explanation seems real or appropriate to anyone other than the most gullible.

Reinforces that the election result was the right one.

NZers now realise that their hospitals, schools, universities, Railways, roads, regions, Govt Services etc etc have been seriously underfunded, while their houses were hyperinflated, and now Labour has to pick up the pieces.

Beginning to think old Joyce might have been right about the $11bill hole in the budget, after all, it was he and Bill and Key who created it, but kept knowledge of it to themselves.

Dear UK residents,
You are no longer being called "whinging poms", that title is now belonging to us "whinging kiwis"!
One month into the new government and people already start complaining.. giv'em a break would ya?

Chairman Moa speaks truth
Even John Key bailed out of leadership of his shell party NatNil
If it was good enough for Key to recognize the party was over why not accept a fresh new government with new ideas ?
The only people complaining are those who profited from maintaining the status quo
Newsflash : In nature there is constant change
Nothing remains the same
Although a few here prefer to rest on their laurels those who develop and grow as humans keep challenging themselves. This is one big reason why new migrants will reinvigorate NZ albeit at social cost at least temporarily

Oh dear, how about we give it a year and then look at the numbers. Winston Peters was on breakfast the other day and he is already back pedaling on immigration numbers. All of a sudden he couldn't give the media a number or even a target to meet. Basically in 3 years when NOTHING has changed Labour will get kicked to the kerb.

Rogue Morgan's pre-election poll had Nats 40, Lab 39.5, Greens 9, NZF 6, Actual result 44.5, 37, 6, 7
This from a polling company that is typically the outlier from Colmar Brunton and Reid Research. Do you think they have improved in accuracy in this latest poll?
https://www.kiwiblog.co.nz/2017/10/how_the_pollsters_did_in_2017.html

And quoting NZF+Labour together is bullshit spin to hide their individually poor polling. At the election they were 44% combined, in this latest poll they are 44.5% combined, hardly a stellar rise. Roy Morgan polled Greens at 9% pre election, they got 6% at the election, and now they are polling them at 10%.

Forget the polls, who cares.Lets see what the new government can do to improve the economy and allow middle and lower income earners to improve their wealth situation. Give them a chance to see what they do. If nothing gets done, chuck em out and get someone in there who can do whats necessary.