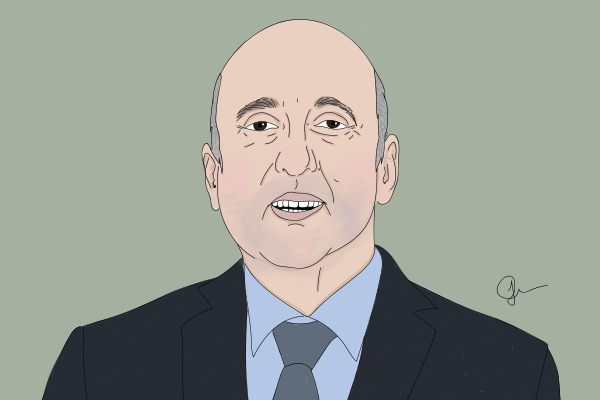 Treasury boss Gabriel Makhlouf says the need to provide the new Government with a lot of advice in a short time led both to an impact on the quality of advice provided and to staff over-work issues.

The comments from Makhlouf came in a brief reference within Treasury's annual report for the past financial year, which was tabled in Parliament on Wednesday.

“With the change in government, the Treasury adapted to meet the needs of new Ministers and help implement the Government’s policies. This transition led to some programmes of work being stopped, such as sales of social housing. It also led to the Treasury taking on major new work programmes that were not in our Statement of Intent," Makhlouf said.

“We have had significant success in re-orienting our work to support the priorities of the new Government.

"We also acknowledge that achieving this has had repercussions.

"The need to provide Ministers with advice on complex issues within tight timeframes sometimes had an impact on the quality of what we were able to deliver.

"It also meant many of our staff worked long hours over sustained periods, with a consequent effect on their wellbeing. We recognise these issues and are taking steps to address them.

“The Treasury’s own wellbeing relies on the dedication and talent of the people who are a part of it. I want to thank all members of the Treasury whānau for the energy and expertise they dedicate to raising living standards for New Zealanders.”

Makhlouf didn't go into any detail about what the "wellbeing" issues faced by staff were or how many were affected.

In terms of the quality of advice provided by Treasury, there was a well-publicised incident In January when an error was identified in Treasury's "microsimulation modelling". This affected their assessment of the projected impact of both the Families Package announced in December 2017 and comparisons with the previous Government’s Family Incomes Package.

This is commented on in the annual report.

"The error led to an overstatement of the projected impact both packages would have on the reduction of child poverty. The error did not, however, affect the number of people who will be helped by the Families Package, the amount of extra income they will receive or the fiscal impact of the Package.

"A risk incident report was raised in January 2018 and an independent review commissioned of the cause of error and possible improvements to our microsimulation modelling framework. The Treasury provided corrected projections in March 2018.

"As a result of the investigation, the Treasury reviewed its quality-assurance procedures to minimise the risk of this kind of error in the future and responded to the various review recommendations. The report was socialised with the Minister’s Office, and subsequently published in May 2018."

The auditors of the Treasury annual report, KPMG, have noted uncertainties associated with the provision for the Crown to assist Southern Response Earthquake Services Limited (SRESL), the government-owned company responsible for settling claims by AMI policyholders for Canterbury earthquake damage.

"Without modifying our opinion, we draw attention to note 5 of the Explanatory Notes to Supplementary Statements and Schedules – Non-Departmental, about the considerable uncertainty surrounding the projection and valuation of SRESL’s outstanding claims liability and therefore, the provision recognised by the Crown to assist SRESL in settling these outstanding claims.

"Note 5 explains that formal Crown financial support is available to SRESL in the form of uncalled share capital. In addition, a separate agreement has been entered into to meet the costs, if any, of settling policyholder claims arising from the representative proceeding filed against SRESL on 29 May 2018. At this stage the financial statements make no allowance for the outcome of these proceedings due to the range of possible outcomes that cannot be reliably quantified at this time. We consider the disclosures about the provision to assist SRESL in settling its outstanding claims to be adequate."

In that aforementioned 'note 5' Treasury says The Crown’s commitment of financial support to SRESL for the ongoing settlement of its Canterbury earthquake claims is embodied in a Crown Support Deed (CSD).

Under the terms of the second deed of amendment and restatement to the Crown support deed in January 2013, the Crown subscribed for 500 million uncalled ordinary shares which had an issue price of $1 per share.

In June 2016, the facility was increased by another 250 million uncalled ordinary shares, and by a further 230 million shares in 2017 to reflect the additional support necessary to enable the company to settle all its outstanding claims.

"The financial obligations to SRESL under the Uncalled Ordinary Share facility have been revalued to their net present value at 30 June 2018. This valuation is driven by SRESL’s expected cash drawdown profile based on the underlying outstanding insurance claims valuation, and its discounting over the life of the CSD.

"The insurance claims valuation was completed by Finity Consulting Pty Limited. Included in the Statement of Departmental and Non-Departmental Expenses and Capital Expenditure Against Appropriations is interest unwind expense recognised on the outstanding liability for the year of $6.857 million (2017: $7.520 million).

"During the 2018/19 year, it is estimated the Crown is to pay $178 million to SRESL to assist in settling its outstanding claims. This amount was included in Current Liabilities – Provisions in the Schedule of Assets and Liabilities (2017: $331 million).

"A representative action proceeding was filed against SRESL on 29 May 2018. The financial statements make no allowance for the outcome of these proceedings, as the range of possible outcomes cannot be reliably quantified at this time.

"The Crown has established a deed of indemnity with SRESL in respect of any settlements that may arise from this claim.

"The provision is based on the outstanding insurance claims valuation, the estimation of which involved a number of key assumptions, including the estimate of the direct costs to be incurred to settle claims, inflation rate, discount rate, claims handling expenses and future over cap numbers.

Ideally there would be a politician or two who would have enough intellect and relevant experience to negate the need for some of these "reports".....Alas........

"The need to provide Ministers with advice on complex issues within tight timeframes sometimes had an impact on the quality of what we were able to deliver.

"It also meant many of our staff worked long hours over sustained periods, with a consequent effect on their wellbeing. We recognise these issues and are taking steps to address them.

I can empathize with them on that one - many of the initiatives in the First 100 Days programme were fiscally and administratively complex. Extremely tight time frames and in many cases, radical changes of direction.

The staff do deserve kudos and good to see Makhlouf backing them.

Treasury - mostly staffed by folk trained in Economics (and we can see from comments hereabouts, the shortcomings of that insulated-from-reality discipline) is heading into - for it - unknown territory.

I suspect he's the right fellow to lead them there, though.

Actually, there have been a number of articles published by well informed commentators raising concerns that Treasury hiring has become overly focused on diversity at the expense of hiring classically trained economists. Whether this contributed to the issues highlighted is difficult to determine.

Classically 'trained' economists don't go with 'well ionformed' commentators. They go with other delusional types - the ones who think you can run growth forever on a finite planet. The ones who choose not to see the results of exponential growth - from too much CO2 dug up and exhaled, to too many fish caught, to too-impactive tourism, to unsustainable dairying.

The growth pigeons are coming home to roost - whether we have time to adapt before crashing is an interesting question, but it's time to move on.