Massey's Alison Brook investigates the current fad to decouple from globalisation. Are we about to jump from efficient but painful global settings into inefficient and even more painful policies?

Massey's Alison Brook investigates the current fad to decouple from globalisation. Are we about to jump from efficient but painful global settings into inefficient and even more painful policies? 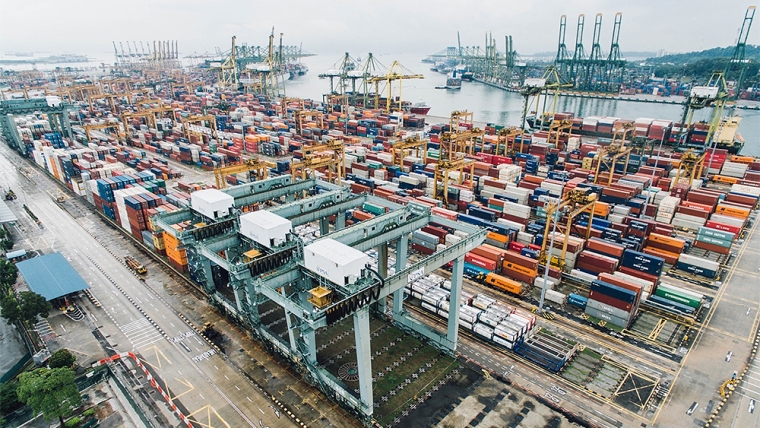 Photo by CHUTTERSNAP on Unsplash

There is mounting speculation that 2020 will mark the end of globalisation as we currently know it. Open borders and markets were already under threat even before the pandemic hit, but the COVID-crisis has made it clear that an over-reliance on global supply chains could pose a real threat to domestic resilience and domestic sovereignty.

The decades leading up to the global financial crisis may have been a heyday for globalisation, but post-2008 there has been an increasingly negative perception of its downstream effects. While globalisation has been one of the biggest drivers of global economic growth over the last forty years, lifting millions of people in the emerging world out of poverty, it is also linked to higher levels of inequality and unfair competition in developed countries.

There is evidence to back this up. It seems that while emerging countries become more competitive through globalisation, large developed countries like the US have experienced a loss of jobs for less-educated workers and with it a rise in income inequality. The World Bank confirmed this by acknowledging the winners have been  the “emerging ‘global middle class,’ mainly people in places such as China, India, Indonesia, and Brazil, along with the world’s top 1 percent. But people at the very bottom of the income ladder, as well as the lower-middle class of rich countries, lost out.” 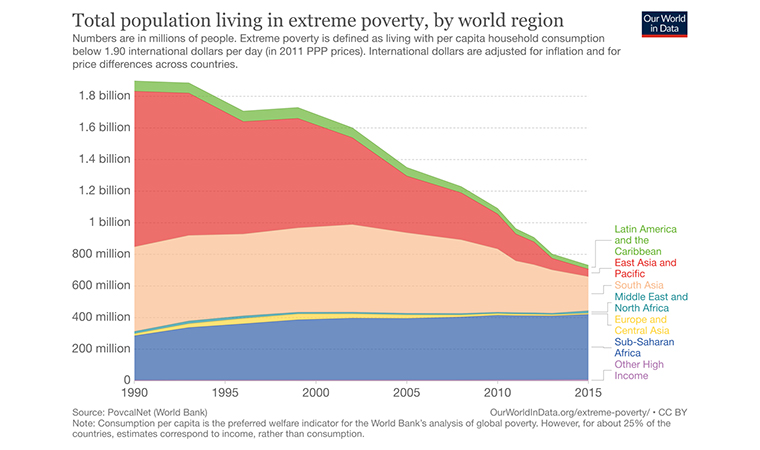 Globalisation has also been linked to the painfully slow recovery from the GFC, with growth in the global economy declining from a post-war average of 3.5 percent to around 2 percent after the GFC. So has the pandemic been the final nail in the coffin for globalisation as many commentators are suggesting?

Despite the pandemic-precipitated recession and restrictions on the movement of goods and people, global trade has proven to be remarkably resilient – so far at least. The World Trade Organisation forecasts a decline in the trade of goods to 9.2 percent in 2020, much less than its original predictions of a plummet of anywhere between 13 and 23 percent. 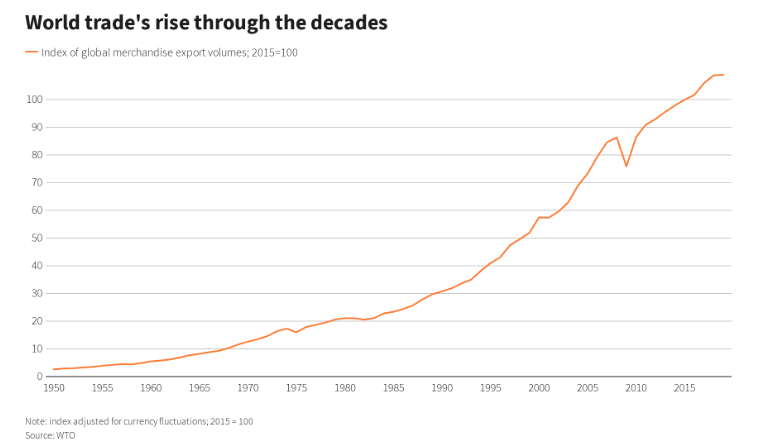 The deglobalisation movement has come at an unfortunate time in a number of respects. An ageing population in developed countries coupled with falling birth rates has left many countries reliant on immigration to boost their working-age population.

And turning inwards during a pandemic can be particularly harmful, as economists Richard Baldwin and Simon Evenett point out, since the production and transport of many medicines and vaccines rely on a global network. Regardless of how enthusiastically proponents of deglobalisation may be to see its demise, it is only through multilateral action that the world will be capable of addressing some of the big issues it currently faces: disease, climate change, cyber-attacks and terrorism.

For small trading nations like New Zealand, global trade is essential not only for the contribution it makes to GDP but also the international connections it brings. There are many studies that suggest global supply chains can boost productivity through increased competition and knowledge exchange. The late economist Alberto Alesina pointed out that small countries can benefit even more than large ones as long as they are open to international trade.

The World Bank looked at the impact of globalisation on small countries from the viewpoint of consumers, exporters and producers. They concluded that consumers in smaller countries almost always gain from globalisation through access to a wider variety of cheaper, higher quality goods. Exporters benefit through access to larger markets and more competitive inputs. The impacts on producers though can be mixed, as increased foreign competition may push less productive firms out of the market.

However, while small advanced economies have generally seen huge benefits from globalisation, David Skilling points out that public support is weakening where strong migration rates have placed pressure on labour markets and infrastructure. He also argues that “Ultra-loose monetary policy in the US and the Eurozone is having disruptive spillover effects on small economies”, such as New Zealand, leading to appreciating exchange rates, rapidly increasing property prices, and low or negative inflation rates.

There is no doubt that the pandemic has heightened trade tensions that were already brewing but it is unlikely to signal the demise of globalisation. As former EU Trade Commissioner and WTO Director-General Pascal Lamy said in a recent keynote address “Globalisation is efficient and painful while de-globalisation is inefficient and painful.” What is clear is that world leaders can no longer afford to ignore the disaffected groups in their societies who feel they have been left behind in the race for global prosperity.

Globalisation has been a massive fail for many middle and lower income earners. Unprecedented transfer of wealth.

So you think we should isolate ourselves from world trade? Imagine the cost of everything in NZ if we were forced to make it here. Not only would prices be prohibitive for all the 'middle and lower income earners', a vast majority of goods would simply not be available in NZ and we can go back to depression era living. This is the same thinking as trump supporters in the states where half the population cannot tear themselves away from 'living with the kardasians' to try and understand basic macro-economics. This kind of thinking does not reflect at all well on the pathetic state of the education system.

A level playing field has to exist.
But the fact is that countries that have laws to stop dumping of pollution into the rivers, won't use child labour, etc. have to charge more.
It's not just about economics (hell; GDP does not even assume the world precious resources will run out!)!

(Sadly; some countries (USA) have said they "support" free trade but use this "compliance" to stop it which further skews the truth)

There are some good points in this article, but it also skips too lightly over some important aspects, perhaps to make it more digestable. One of the big problems with globalisation has been China's ability to corner a dominating share of the worlds manufacturing, which has increased the worlds dependency on China for so many things. Globalisation per se is not the issue, the imposition of the negative impacts of the 'free market' and the lack of widely distributed manufacturing to support national resilience across the world in time of crisis is, as is the eternal consumption of resources.

With the current state of affairs none of this will be easy to correct, but the more it is delayed the harder it will get. And it needs Government involvement to support. Other articles talk about efficiency and productivity, but when one considers the limits imposed by finite systems of resources, keeping populations occupied may well be more important. Big discussions on a complex subject.

Globalisation was coined and has always been promoted by BIG CORPORATIONS for profit maximisation.

After all, it is about what people choose to do.

The diminishing west during the past 30 years should not attribute to globalisation but rather its diminishing technological advancement.

The west still owns most of the IP

Its not he diminishing west, its the catching up East from their significant disadvantage years ago. We could call it lag, but you know, Chinese residents arn't supposed to have access to all the good parts of the internet :P

Or are we really talking about a political ideology and its associated narrative; and whether that ideology views sovereignty/nationalism as a threat?

It does seem to me that the anti-globalist, or globalism critics are now looked at as on the fringes, or conspiratorial factions. Take for example Jane Kelsey's opposition to the TPPA - it seemed to me she was a bit of a lone wolf from academia on the subject. Take for example, anti-immigration voices - they get the same 'not politically-correct' treatment. Take for example global labour rights movements - getting so little air time/attention. Our own government has for years paid lip service to worker exploitation and worker conditions in one of our largest trading partners.

Which makes me think that globalisation is the current centrist and most widely accepted political ideology of our times - but one which most of us are unaware of what its core ideological claims are. And perhaps it is these six core claims, as opposed to its varied effects (as per discussed in the above article), that we instead should be discussing:

It is not the free trade aspect that is the issue it is all the other things you lose control over such as foreign ownership, immigration and the ability of corporations to dictate a country’s policy eg cigarette packaging. We give away our sovereignty too easily. Time for Labour to put NZ first.

Take out corporations and their ability to override a country's law, and global trade is fine. Global trade should not include land and assets of another country.