Having advocated for it earlier this year, Gareth Vaughan is encouraged to see the Government proposing merchant service fee regulation, but calls for bolder action

Having advocated for it earlier this year, Gareth Vaughan is encouraged to see the Government proposing merchant service fee regulation, but calls for bolder action 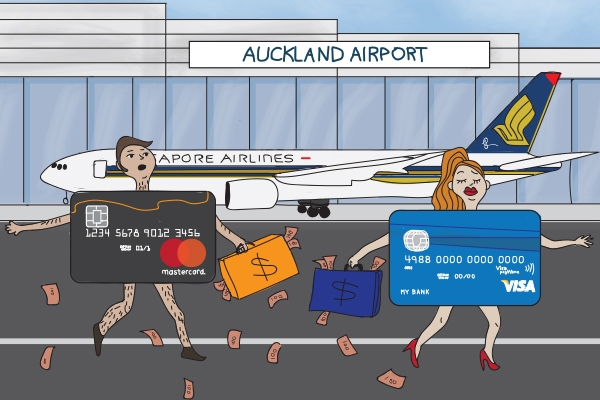 The short three paragraph release said ASB welcomed the Government's move to consult on merchant service fees, and had immediately implemented a substantial rebate for small and medium sized ASB business customers until the outcome of the consultation is known. Topping it off, the rebate would be backdated to the start of December, ASB said.

However, no where in the release did ASB provide any details whatsoever about the rebate. Asked by interest.co.nz for the details an ASB spokeswoman said: "The rebate amount a business customer will receive depends on their transaction volumes and is commercially sensitive.”

This in a nutshell nicely encapsulates a key reason why regulation of merchant service fees is needed. There is way too little sunlight shone on this Byzantine area, typically the third highest cost of doing business for SMEs after wages and rent.

The interchange fee is paid by the merchant’s bank to the consumer’s bank. The idea is that it recoups the costs of processing payments, provides a profit margin, and with credit card transactions includes an additional margin to fund inducements or rewards such as Airpoints for customers and the credit provided.

The Visa and Mastercard card schemes don't directly get revenue from the interchange fee. Instead they receive scheme fees for the use of their cards from both the merchant and consumers' banks. As MBIE puts it: "The card schemes set a complex range of interchange fee caps that issuer banks can charge acquiring banks."

"The interchange fee cap depends on the merchant type and the form of card used, to balance incentives for higher use and acceptance of cards on both sides of the platform. For example, the schemes set a lower interchange cap for strategic merchants, usually being the largest merchants such as supermarkets and fuel chains."

"The participating issuers may set lower interchange fees, through bilateral negotiations with acquirers, but generally target the scheme caps. This enables the issuer to set higher inducements to attract customers to use their cards over their competitors, and in doing so, increases incentives on consumers to use credit cards over other payment methods, such as EFTPOS," MBIE adds.

Commerce and Consumer Affairs Minister David Clark and Small Business Minister Stuart Nash are proposing to regulate interchange fees for both credit and debit schemes to force them lower. The Ministry of Business, Innovation & Employment (MBIE) points to Retail New Zealand 2019 data showing NZ contactless debit merchant service fees at 1.1% of the purchase payment versus Australia, where regulation has been in place for years, at 0.6%, and NZ credit card merchant service fees of 1.5% versus 0.8% in Australia.

However in August Retail NZ said that following interchange fee reductions by Visa and Mastercard, a merchant should generally be paying no more than about 0.6% for in store contactless debit and 1.4% for credit transactions. Retail NZ is the lobby group for retailers.

In March and April I wrote a five part series on NZ's retail payments systems. In the third article I looked at the complications of interchange and merchant service fees. And in the finale I called for a ban on interchange fees. This is something the Australian Productivity Commission recommended in 2018.

To repeat myself from April, in the age of the internet, smartphones and instant communications, interchange is a relic from a pre-electronic payments era. To quote the Aussie Productivity Commission: "The case for interchange fees to fund reward programs or to redistribute benefits on a transactions basis from the merchant’s bank to the customer’s bank is feeble."

And as the Reserve Bank of Australia has put it: "The major card schemes are mature systems, and regulators in many countries have reached the judgement that their cards are ‘must take’ methods of payments – that is, that merchants have little choice but to accept their cards. In practice, with interchange fees being used to incentivise issuers [typically banks] to issue cards from a particular scheme and cardholders to use that card, the tendency has been for competition between mature card schemes to drive up interchange fees and costs to merchants, with adverse effects on the efficiency of the payments system."

A previous MBIE paper canvassing retail payments issues, from 2016, suggested considering whether the retail payment system, or a part of the system, should be treated like a utility. Absolutely it should. As the electricity and telecommunications sectors are. In those sectors greater access to the physical networks aims to increase competition, encourage innovation and lower prices.

Another factor to throw into the mix is the role of Visa and Mastercard, who sit atop the interchange world. Whilst these two global behemoths point out interchange doesn't generate revenue for them, it underpins and grows their networks. And it drives up costs for merchants and ultimately consumers too.

The first article of my series highlighted how Visa and Mastercard's NZ transactions are processed in Singapore with the revenue earned from this booked in Singapore. There, their financial statements show income tax rates of 5.1% and 2.2%, respectively. That's well below Singapore's standard 17% corporate tax rate due to sweetheart tax deals.

Now, we don't know how much revenue Visa and Mastercard generate in NZ. They won't say, and they don't file financial results here. But we do know that in a NZ context they must be generating very significant sums. Clipping the ticket on billions of transactions through their networks, and booking the likes of service revenue, data processing revenue, international transaction revenue, plus charging licence fees for the use of their brands and account holder services, must add up.

Merchants pay hundreds of millions of dollars in merchant service fees to banks annually, and credit card reward schemes tilt the playing field in favour of high income households over low income households. All the while the Visa and Mastercard interchange system entices banks towards its lucrative revenue streams and away from EFTPOS, which is cheaper and more cost efficient for merchants and ultimately consumers.

And don't think that new technologies will necessarily provide a way of sidestepping Visa and Mastercard. As I wrote earlier in the year, the two are adept at embracing new threats to their businesses, enabling them to clip the ticket when new payments technologies and services emerge. Visa calls this its "open partnership model."

Whether it be payment services from international technology giants such as Apple and Google, or the buy now pay later sector, Visa and Mastercard are in there clipping the ticket. They're even getting involved with cryptocurrency.

Visa, for example, is partnering with cryptocurrency startup BlockFi to offer the Bitcoin Rewards Credit Card. This credit card rewards purchases with Bitcoin rather than airline miles or cash. Visa has also joined with Fold, another startup, to offer a debit card that earns rewards denominated in Bitcoin, and teamed up with Coinbase in the Coinbase Card, which lets users spend Bitcoin using the Visa debit card.

On top of interchange fee regulation, the Government is also mulling a range of other options to force down merchant service fees. These include price regulation, either directly or through principle-based tests, of the whole merchant service fee, of card fees for consumers, or of other product types such as online payment gateways, and of buy now, pay later merchant fees that can be more than 5% of the purchase payment.

After years of talk and umming and ahing, it's encouraging to see the Government proposing merchant service fee regulation. However, they should be going harder than they appear prepared to do.

I agree Gareth. I like the concept of self regulation where the threat of government regulation causes businesses to act sensibly. Now is the time to show that the threat is real, that if a sector takes the piss they will end up worse off through extreme regulation. It’s time to make an example, and even better the only ones that get hurt are the overseas owned CC companies and banks.

Gareth,
I hope you keep hammering away on these issues.
Currently, it s a classic case of unregluated market power, further facilitated by a lack of transparency.
KeithW

Or try lowering corporate taxes so that multinationals base themselves here instead of Singapore.

Perhaps we should be careful what we wish for. More regulation has the potential to intrench the current players even if charges come down. In the long run it maybe better to encourage new fin tech players and potentially completely disintermediate the existing bank/card infrastructure.

I agree 100%. But given the Govt's record, I expect we will see an increase in fees.

Shame there's no iphone near field tech, or QR code thingie to allow direct bank to bank transactions for free. If shops could offer a "discount" for no- service-fee transactions then perhaps the free market could sort the problem out?

My own business does offer free fee transactions. It is called paying cash. One business theory is that with the banks all shutting, young people will use their "cool" paywave and phone pay choices, and old gits will take money out of the money machine and pay cash for everything.

I guess credit cards have been cleverly marketed over the years to give the owner an aura of prestige and status. Rewards scheme also incentivises, and because the card owner pays a yearly fee they're incentivised to use the damn thing all the time. Maybe there’s also something psychological about being entrusted with a high credit limit. I feel sorry for retailers. It’s an uphill battle.

Great article. Thanks for looking into this and keeping us informed Gareth

The poor old ASB didn't even make a billion last year. The top execs probably only received a million or two each in bonuses. And if these foreign banks ever look like failing again (BNZ,1990) we won't mind using our money to bail them out will we? Of course it just wouldn't be fair to put provisions for a claw back of bonuses into their contracts. LOL. The David Hisco fiasco shows us just how protected (and corrupt) these empty suits really are.
Incidentally, the annual credit card charges are one fee the banks will not waive. Their credit card businesses are run as subsidiaries and they use that as an excuse to insist that fees are paid.