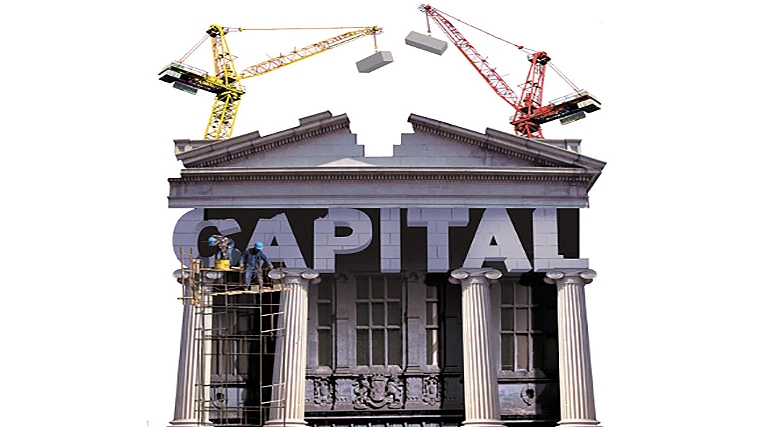 Earlier this month, the Reserve Bank published the finalised capital adequacy requirements. From July 2022 onward, our banks need to increase their capital ratios to levels that are among the highest in the world. The requirements will be phased in over the next seven years.

An important feature of the Reserve Bank (RBNZ) capital requirements is that they require banks to meet a large prudential capital buffer: 9% of risk-weighted assets for large banks and 7% for smaller banks. Banks that ‘dip into’ this buffer face dividend payment restrictions.

The finalisation of the capital adequacy requirements marks the end of a process that started in 2017. According to Deputy Governor Geoff Bascand, “The regulatory framework for capital is now more up-to-date, logical and transparent. Banks will find it easier to understand our expectations and comply with them.”

The RBNZ should be commended for completing an ambitious project. It is no small feat to re-invent capital rules single-handedly, with little support of peer banks or a global regulator such as the Basel Committee. Our prudential supervisor went the extra mile to craft standards that were meant to simplify capital requirements which, after the Global Financial Crisis, had become more complex. A painful reminder of the complexity was the disqualification and subsequent re-qualification of Kiwibank’s capital securities in 2017.

The capital plans were controversial for sure. Our RBNZ received pushback for wanting to eliminate complex capital instruments. Pundits poured scorn on its surprise decision to protect the New Zealand financial system from a one-in-200 years adverse event instead of a one-in-hundred years adverse event.

Unfortunately, as is always the case with bank regulations, they are out of date as soon as the ink used to write them has dried. The RBNZ capital plans are no exception. They were decided around the time that the very first people were tested and confirmed positive for COVID-19. Responding to the pandemic, the RBNZ temporarily put the capital plans on hold. Unfortunately, it did not use this pause to rethink their capital ambitions.

As a result, it looks like the RBNZ ignored some important observations. I will elaborate on three of them: the need to increase the ability of capital to absorb losses in a severe downturn; the effects that the capital requirements already have on our economy; and some potentially unintended consequences of the Capital Buffer Response Framework. In all, I think I should be forgiven for concluding that the RBNZ capital plans may not have met all of their initial objectives: the capital requirements reflect pre-COVID times and remain complex.

The need for more flexible buffers

As a result of these successful policy interventions, the Basel Committee is now exploring the possibility of increasing the buffers that can be released during a crisis. Based on these developments, the RBNZ could have decided to increase the size of the countercyclical buffer requirement (now 1.50%) and lower the capital conservation buffer (now 5.50%). The former can be released to keep banks lending when the economy suffers a significant downturn.

Less lending to the productive sectors of the economy

My second observation is that the capital requirements are already affecting the New Zealand financial system. Over the last five quarters, New Zealand banks have significantly increased their core capital ratios: 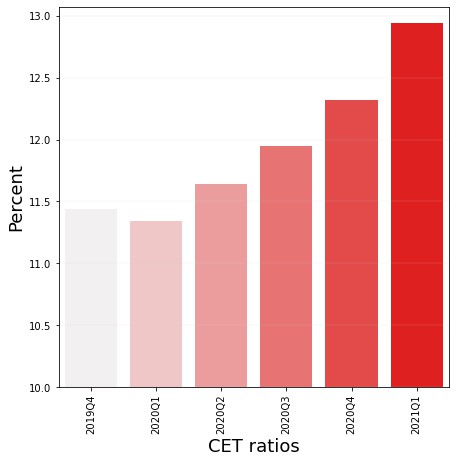 The increase (about 14% since last year) is much stronger than, say, the increase in capital of European banks reported by the European Banking Authority: 4.4%.

On the surface, this looks reassuring: More capital is better. But such a significant increase in capital ratios is deceptive. One way banks increase capital ratios is to lend less to the productive sectors of our economy. In bank-speak this is called ‘de-risking’: lending less to riskier borrowers.  As reported by Gareth Vaughan last week: ANZ is now lending less to businesses than BNZ(!) The graph below confirms this for the aggregate: lending for housing has increased (the bars at the left), while riskier lending to businesses and farms has suffered. 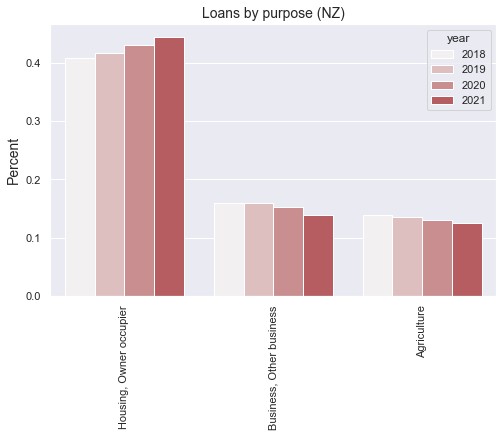 Going forward, the trend of de-risking to meet higher capital requirements will remain a headache: inflation expectations are on the rise, and just this week Standard and Poor's reported that banks face increasing risks from soaring house prices. This all will affect lending for years to come.

The new capital requirements introduce a Capital Buffer Response Framework. This framework kicks in when a bank fails to fully meet the buffer requirements. A bank that dips into the prudential capital buffer could be barred from paying dividends. This way, banks can restore capital levels to fully meet requirements.

The dividend restrictions are more severe if a bank dips further into the prudential capital buffer (PCB). A bank with a PCB of 9% can dip into the first 1.5% band of that buffer before it faces any consequences. Banks face more stringent dividend restrictions if the ‘dip’ is more severe. They can range from 60% to 0% of earnings, in which case banks cannot pay out anything to their owners. (But note that at that point, a bank doesn’t have a lot of earnings to distribute anyway.) Banks that dip below the first band should also deliver a capital restoration plan to the RBNZ.

My worry is about the governance of this framework. What, for example, will happen if one bank operates at or just below the top end of the PCB? Distributions are largely unrestricted and there is no need for the supervisor to take action. Unfortunately, this is unregulated territory where the RBNZ can nevertheless use its supervisory powers to intervene. Will the RBNZ play favourites and be more lenient with Kiwibank than with ANZ? Will investors understand that it is okay to operate within the usable 1.5% band at the top of the prudential capital buffer? To me, this is very confusing.

What if a bank deliberately structures its capital in such a way that it operates below the first band? It will postpone some dividend payments to the year after and hand in a restoration plan. The bank then has 12 months to return to its full capital levels. This gives the offending bank a year to operate at a capital level significantly below that of its peers. The risks of playing this game are low: A large bank that operates with a PCB of 6% instead of 9% will still sport a total capital ratio of about 15%, which it what our banks currently report.

Of course, this example looks farfetched. But it could apply to one of our weaker banks if, on the way to higher capital requirements, it suffers a set-back which it may overcome by temporarily increasing its risk-appetite and reap the associated benefits of higher returns. It is unclear what our prudential supervisor will do in such a case, which adds to the confusion.

In short, the Capital Buffer Response Framework looks deceptively simple, and perhaps that is what it is: deceptive and it may not be logical nor transparent.

"An important feature of the Reserve Bank (RBNZ) capital requirements is that they require banks to meet a large prudential capital buffer: 9% of risk-weighted assets for large banks"

That seems reasonable at first glance, but in my view, to base a bank's capital requirements on 'risk-weighted' is just wrong. Has nothing been learned from the GFC? Property was considered to be low-risk so banks could allocate a lower level of capital against it. Let me quote from Mervyn(Lord) King's book The End of Alchemy; "Risk weights derived from statistical studies of the past, proved highly misleading in the crisis. For example, past data had suggested that mortgages were a relatively safe asset for banks to own, and yet in the crisis they turned out to be the source of large losses'. He then went on to illustrate this with the example of Northern Rock.

The alternative to the Risk-Weighted capital would be the leverage ratio. To those who suggest that the leverage ratio works better I would say: what have you learned from the Dot.com crisis? That crisis was all about keeping balance sheets short - to create the impression of solid solvency. Remember that Enron wanted to become a bank and for that reason artificially lowered it leverage ratio by keeping assets off-balance. (Re Lord King, remind me, was he the BOE governor in charge during the lead-up to the DFC?)

You raise a number of issues. On leverage, had it been known that Northern Rock-which in early 2007 had the highest ratio of capital to risk-weighted assets of any major UK bank-actually had a leverage ratio of over 60/1, then alarm bells would have rung.
However, it is not a binary issue as you suggest. King himself proposes a different approach which I don't have time to go into here, while the US economist Irving Fisher proposed a solution during the Great Depression in a paper titled 100% Money. This subsequently became known as the Chicago Plan. Basically he proposed that banks which offered deposits as we understand them, be permitted to do other business-today we might call them Narrow Banks- and they would be strictly regulated. All other activities would be carried out by other banking institutions with no sovereign backing and minimal regulation.
Yes, he was Governor of the BOE during the GFC.

Although some what above me I think i get the gist of the article. From a laymen's perspective, the banks need a big stick and a very small carrot regarding capital ratios and approaching too close to the set capital ratio. If this affects lending to the productive sector of the economy them some other means needs to be found to lend to the productive sector. Possibly something like Kiwibank but for industries. Run on commercial lines and backed by the govt.