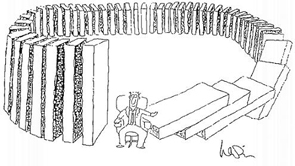 It has been nine months since the Reserve Bank’s most recent policy child was brought into the world and, over this period, high loan-to-value residential lending has fallen by almost 80%.

The limits for high-LVR mortgage lending were implemented to strengthen the financial system against housing market shocks and ease house price inflation.

However, the restrictions have had a far greater effect on low deposit home loan issuances than perhaps initially intended.

This article delves into why high-LVR loans, which once made up 25% of residential mortgage lending from banks, have reduced to levels far below that which the Reserve Bank policy allows.

Implemented in October 2013, high-LVR restrictions limit the proportion of lending banks can make to homebuyers who front up with a deposit lower than 20% of the dwelling’s value.  Of all the new home loans banks issue on average over a six month period, only 10% can be in the high-LVR category.

In December, the Reserve Bank announced that loans for those building a new home were excluded from the high-LVR restrictions.

The purpose of this exemption was to allow housing stocks to expand unrestrained and thus, to reduce upwards pressure on house price inflation (particularly in Auckland and Christchurch).

As a result, the 10% 'speed bump' on high-LVR lending now only applies those buying an already existing dwelling with deposit under 20% of the home’s value.

Following the implementation of LVR restrictions, the proportion of bank lending for high-LVR loans dropped to a low of 3.6% within four months (after exemptions).

This extremely low level of high-LVR lending was well within the Reserve Bank’s 10% prescribed limit and was largely attributed to banks being extremely cautious as they transitioned into the new policy environment. As banks became used to the new rules, we expected them to expand their high-LVR lending.

However, over the three months to April, high-LVR lending (excluding construction) has still only averaged 3.9% of total residential loans.

A number of hypotheses could explain this result

At first glance, many have argued that banks are simply being very wary of exceeding the 10% limit so have been deliberately cautious in their lending behaviour.  However, this argument is not very compelling, as there has been very little variation on a month to month basis in the high-LVR lending rate.

Excluding exemptions, high-LVR lending over the past six months has stayed within a tight band of between 3-6% of new residential lending – indicating that banks have enough control over their lending to increase it and still remain within the 10% limit.

But perhaps there are other reasons for banks to exercise caution.

Since the Global Financial Crisis, the Reserve Bank has been looking at, and implementing, new policies to enhance financial stability (raising tier one capital ratios to 6% was one initiative, as was introducing high-LVR restrictions).

Complying with each new policy, ultimately limits bank liberties in the financial system.

Banks could be 'over complying' to LVR restrictions in a bid to minimise the risk of other more restrictive policies being implemented in the future.

Alternatively, ‘over compliance’ could be a tactic to limit the endurance of the current LVR restrictions.

The LVR restrictions are not intended to be permanent and as the Reserve Bank has said that the duration of the policy is dependent on their effectiveness – greater-than-expected compliance could shorten this period.

However, there is a lot to lose from any kind of 'over compliance' with regulations, particularly when there is no agreement that doing so will shorten the duration of the current policy or prevent further regulations.

Despite its risks, high-LVR lending is perhaps one of the more profitable forms of residential lending – the loan sum is larger, which ensures a longer stream of interest repayments.

Finally, there are two sides to every story, and while banks may control to whom they lend, they can only do so if there are people who want loans.

Following the LVR policy implementation, prospective homebuyers may have begun to self-regulate.

Although banks could still allocate 10% of their lending to high-LVR loans, this was less than half of what they formerly allocated to the category.  Word that it was harder to get a mortgage with a sub 20% deposit soon turned into talk that a 20% deposit was a requirement.

People have an aversion to rejection, particularly when it comes at a cost. Applying for home loans takes a certain degree of effort.  If a prospective homebuyer thinks they won't get a loan with a less than 20% deposit, they either:

1. don't bother applying in the first place, or

2. wait until they can save up a larger deposit, or

3. they source funding (eg from family) to top up their deposit

The first of these outcomes results in a lower number of people seeking low deposit home loans.

The latter two result in a transition of new mortgagees from the high-LVR category to the lower LVR categories.

All of these outcomes skew residential lending away from high-LVR loans.

If there is a smaller proportion of low deposit homebuyers on the market, banks may not even be able to make 10% of their residential loans fit in the high-LVR category – even if they wanted to.

Mieke Welvaert is a data analyst at Infometrics. You can contact her here »

Not suprising really, which first home buyers have $120k saved up ready for a deposit? it would take a very long time for the average wage New Zealand couple to save this ammount.

Looking at the impact, yes its larger then the RB expected, but having read Steve Keen, I am not that surprised.  Is the LVR a bad thing? no IMHO, NET I think its very good, lets hope the RB grows some and keeps it (even if they vary it to say 15%).

Steven is a property speculator!!!

Doesn't want changes to the RMA.....Likes the LVR....well well....do you want FHB to also keep the banking sector safe for you?

A big factor in this in the increase cost of high LVR lending, banks have ranked up the LEM and insurance charges for high LVR loans. You can be looking at over 1.5% above market rates and no discounts or cash back which will equate to about 2%.
So someone with 10% $50,000 deposit on a $500,000 ($450,000 loan) house could be paying $9000pa (2%) extra in repayment than those with 20% equity.
These customer are 1) using there parent home as join equity reducing LVR to less than 80% and saving them $9000pa while borrowing the same. 2) borrowing $50,000 unsecured from wherever they can, Credit cards, Personal loan etc this can be done for between 12% and 19.95% or even less 1% balance transfer on credit cards. Even those these rates are higher it can still be less than 2% over the whole loan and with increasing house prices they can refinance there mortgage in 12 months or less once property prices have increased 10% and repay the personal loans. (option two is most common when people are close to 80%, 81-85% LVR) borrowing 10% like above can end up costing more than 2% but would be low for only a couple of percent LVR.
So the same people who would of once borrowed 83% are still doing so they are just borrowing the 3% elsewhere not because bank aren't lending above 80% but because its cheaper not to borrow the full amount form a bank as a mortgage. The bank applies a higher interest rate to the whole loan not just the amount over 80%, people are doing what they always have looking for the best deal. That's why a lot of people that are over 80% are using Welcome Home loans they only need to pay a 1% up front fee and can get the same interest rates as below 80% borrowers.