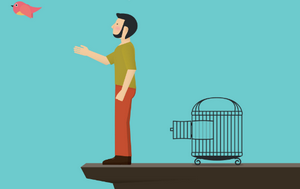 One of the jokes frequently heard at interest.co.nz when Kiwibank and its parent NZ Post release financial results goes something like this; "Oh look, there's that bank with a postal service tacked on."

This, of course, is a play on the fact that when Kiwibank was launched in 2002 it was set up as a subsidiary of NZ Post, and thus a bank was tacked onto the postal service. Since then, however, Kiwibank's profit generating ability has risen dramatically with NZ Post left fighting for its survival in a changing world.

Against this backdrop the time now appears ripe for the child to leave home and go it alone. This, I believe, would give Kiwibank a better chance of competing with the four Australian owned banks - ANZ, ASB, BNZ and Westpac - that dominate New Zealand banking. And one way Kiwibank could grow, in a low cost way, is by lending money through a peer-to-peer (P2P) platform.

Propping up a structurally challenged parent

Kiwibank's fourth consecutive record annual profit of $127 million, a rise of 27% unveiled on Friday, once again propped up NZ Post. The parent recorded annual profit of $143 million, which aside from the burgeoning contribution from Kiwibank, was also bolstered by a $46 million gain on the sale of Australian courier company Couriers Please.

A structurally challenged, large state owned employer, NZ Post will probably need to be nursed in some sort of corporate hospice for some time yet.

Having tipped tens of millions of taxpayer dollars into Kiwibank over the years, NZ Post is now reaping some rewards. Kiwibank paid its first dividend, $22 million, during the June year and NZ Post wants this to potentially double in the year to June 2016.

However, I believe from the taxpayers' perspective the best use of Kiwibank's money generating ability isn't propping up an ailing parent. Rather it's investing in Kiwibank's own development. This is required because the current government is clearly not going to tip more taxpayers' money into Kiwibank to boost the bank's ability to grow. And nor is public opinion in favour of a sharemarket listing of even a minority stake in Kiwibank, which could be another avenue for it to raise capital.

Kiwibank's currently in the midst of a three to five year upgrade to its core banking system that's going to cost north of $100 million. Like its rivals the bank is also going digital, which also involves significant investment, and is restructuring its branches, which although shared with NZ Post are not going to be as important in a digital future.

In a softening economy capital constraint is a key factor in reining in Kiwibank's growth. For although Kiwibank's key regulatory capital ratios are above the Reserve Bank set minimum, there's not too much breathing room. For example, its Common Equity Tier One ratio was 9.3% at June 30, versus the minimum required 7%.

Kiwibank has been focusing on improving profitability and has become more conservative in its key market, the home loan market. Evidence here was CEO Paul Brock attributing Kiwibank's soft fourth quarter mortgage growth to picking and choosing how it competes in a fiercely competitive and commoditised market, where some rivals have been writing loans Brock maintains are unprofitable.

Nonetheless Standard & Poor's recently highlighted that Kiwibank has strengthened its competitive advantage during the past two years over smaller New Zealand banks that target the same customer base, and narrowed the gap between itself and the four Australian owned banks. And whilst downgrading the stand alone credit profiles of the big four, S&P left Kiwibank's unchanged.

However, S&P also pointed out ANZ, ASB, BNZ and Westpac generally enjoy greater pricing power and operating efficiency than Kiwibank due to greater economies of scale and business diversity.

Kiwibank is trying to get on a more even keel with those four, as Brock puts it, by seeking Internal Ratings Based (IRB) capital status from the Reserve Bank. This would effectively enable Kiwibank to carry less capital and be more profitable. Although as I opined here in March, I have no issue with Kiwibank having the playing field with its Aussie owned rivals leveled, I'd rather see their capital requirements increased than Kiwibank's decreased.

One of the reasons why now may be a good time to set Kiwibank free is because it's not active in the agriculture market. As rival banks fret about the impact of tumbling dairy prices on their impaired and past due loans, Kiwibank doesn't have any direct exposure to farmers. It does, of course, have exposure to provincial New Zealand though and is likely to feel the dairy downturn via that.

It doesn't have a presence in corporate banking either, highlighting that Kiwibank is still not yet a full service bank. Elsewhere it has a foothold in the credit card market, and is striving to grow in the SME market.

Emphasizing just how much Kiwibank's skewed to the home loan market, it had gross loans of $15.651 billion at June 30 with its home loan book standing at $14.611 billion. Thus diversifying its lending is desirable.

Although there's no shortage of NZ owned banks with, aside from Kiwibank, the likes of SBS, TSB, the Co-operative Bank and Heartland, the big four Aussie owned bank's still dominate about 90% of the NZ market. Kiwibank remains best placed of the rest to compete with the big four.

But to do so it must be set free and allowed to be innovative rather than be required to prop up an ailing parent. Once free, one area Kiwibank could look to in terms of innovating could be obtaining a P2P lending licence, or at least taking a shareholding in a P2P lender. Such a move could open up a world of possibilities. By lending through a P2P platform itself, as Heartland Bank is doing with Harmoney, Kiwibank would get growth opportunities in the SME and consumer finance markets, and potentially even the rural market which LendMe is targeting.

A move into the low cost, lightly regulated P2P scene would have to be well thought out. But Kiwibank marrying its NZ owned status to the people's market ethos of the P2P world might just make the big four banks sit up and take notice.

I wonder how the real estate costs are shared between the postal and banking arms?