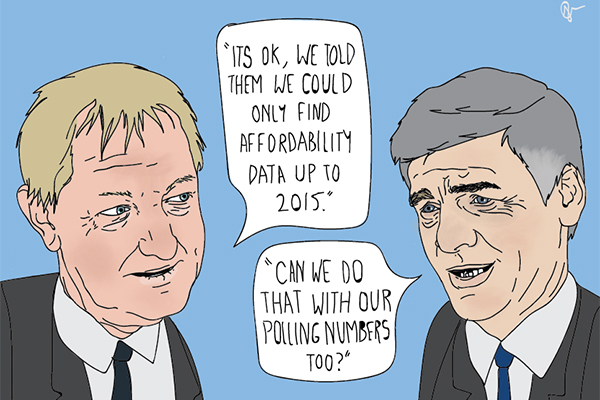 “What deposit do you reckon you need for that?” Espiner asked. Before Smith was able to get into his answer, he continued: “$175,000. Do you think that’s affordable?”

Smith’s reply is the questionable part of the conversation: “Well, with the Welcome Home Loans that we have, then a 10% deposit would be for $86,000.”

The Welcome Home Loans scheme is a key part of the current government’s ‘affordable housing’ package. It allows banks to shift the risk of default onto Housing NZ’s balance sheet for mortgage customers they wouldn’t otherwise lend to.

But there are some checks in place to try and ensure it doesn’t get too out of hand. One of them is a house price cap. You can’t access the Welcome Home Loans scheme if the house you want to buy costs more than the regional cap.

In Auckland, it is $600,000 for existing properties, and $650,000 for new properties. You can’t buy a median-priced house in Auckland using the Welcome Home Loan scheme. For Smith to suggest the scheme could help someone in that situation is simply wrong.

In fact, you can’t even buy a lower-quartile house in Auckland with help from the Welcome Home Loan scheme – in May that came in at $655,000. That’s ridiculous.

And lower quartile pricing is what I want to discuss next for the second instance of concern.

The problem I have is that comments from Ministers referring to the Massey report are often in response to questions about affordability for First Home Buyers, particularly in Auckland.

Do not listen to them if they wheel this one out.

As part of Interest.co.nz’s Home Loan Affordability series, we run a First Home Buyer report. And we don’t assume FHBs are trying to buy a median-priced house. We estimate the proportion of take home pay required to service a mortgage that has been used to buy a lower-quartile house by a couple aged 25-29 earning the median wage for their age group.

It’s not an exact science. But the latest figures show that in May, such a couple would have required 45.2% of their take home pay to service their $591,679 mortgage. That’s up from 40.3% a year ago. First Home Buyer loan affordability in Auckland is worse than it was a year ago.

“Based on data from CoreLogic on the behaviour of first home buyers, the definition of a modest dwelling is set as the lower quartile of the housing market in the area (territorial authority, or ward for Auckland) in which the household resides.”

Now, MBIE uses Corelogic data rather than REINZ. That’s fine – it’s nice they’re allowed access to it. The bureaucrats also have free access to various Stats NZ ‘IDI’ address data and IRD income data which we don’t have. In theory, theirs should be the gold standard first home buyer affordability measure.

In practice, they botched the release, used the wrong mortgage interest rate and the results had an 18-month lag. We’re told it will get better. Perhaps to a six-to-nine-month lag. Hallelujah.

This means Nick Smith cannot turn to his own Ministry when defending the government’s track record for Auckland First Home Buyers, unless he wants to talk about how it got worse between 2013 and mid-2015.

On the flip-side, it puts Ministers in the position to pick and choose how best to defend their track record on Auckland First Home Buyers.

This is nothing but making fun of first home buyer by government. Rubbing salt to wound.

Nick Smith would have no place working in the private sector running data- or evidence-based solutions to build business cases, particularly if the business he were involved with had to require on efficiency and innovation to turn a buck. He has forged his career in the right arena to get away with this malarky. Hell, a current catch phrase in the business is "big data" and all the govt / bureaucrats can manage is perform in a Kafkaesque manner. Smith should take some responsibility: either quit or stop behaving like a 2nd-rate apologist.

One thing is for sure: he disproves the oft-used argument "MPs need to be paid highly because people of their caliber could make far more money in their private sector".

I think they use a different tactic by stating, "we're not in it for the money." That's somewhat true: at a cursory glance, salaries do not match top salaries in the private sector. The real crux is that most of them would not be able to command a top-level salary in the private sector, unless it was a monopolistic / oligopolistic organization (energy for example) or some kind of institutionalized organization that is granted privilege (banking, finance).

I started writing some text about the believability of the two mentioned then stopped. Its all been said before.

They should just avoid the media and fade away ungracefully.

Hopefully will fade away after 22 Sept.

First Home Buyers!
Now who you are:
Bolton said the typical first home buyer that could afford the Onehunga property would be a professional couple without children who had perhaps come back from working overseas and had a decent deposit.

Stop. Stop with the word games. Stop changing the labels and stealing labels to cover the issue!
Auckland will just fester more as these word games continue!
Auckland will continue with poor housing outcomes, as folk keep changing and wriggling words and using dumb definitions to describe the poor outcomes!

Read this again!
Bolton said the typical first home buyer that could afford the Onehunga property would be a professional couple without children who had perhaps come back from working overseas and had a decent deposit.

Your job in New Zealand is NOT GOOD enough!
"snap" and you're back in the room!

The government isn't interested in evidence. They learned from Dame John Key that it's perception that counts, and it's politically expedient to wave difficult evidence away. They're not called these here, but we have a government dealing in 'alternative facts', whether in housing, water quality or a host of other issues. Good on 'interest' (and National Radio), both rare in NZ media, for digging through to realities.

Beware interest.co.nz editors bearing anything positive about anything.

Beware interest.co.nz editors bearing anything positive about anything.

????
Please explain or give examples.

IMO interest.co.nz is one of the top websites on economy, finance etc. in NZ

I agree with you. Interest.co.nz is a fantastic resource. The editorial team are competent and insightful as well.

Don't forget the David will challenge incorrect assumptions as well. He even goes out of his way to provide statistics to back his position.

Trademe in Pakuranga has a 3 bedroom home for $750k, any normal hardworking single, couple or family could save a deposit (10-15%) with help of Kiwi saver and buy this property, unless of course they are a contributor on this forum as auckland is basically incompatible with life in their thinking...try putting some adult shoes on with laces and buying something in other world cities for that kind of money.

The constant reference to the WHL scheme as if its a Good Thang neglects the baleful economic effect it actually has on building new (and selling old, probably).

This effect can be summed up by posing a simple question:

WHL, as a loan scheme, has one core criterion: 'Can you Fog a Mirror?' - so it is theoretically available to all: it is Universal.

In economic pricing terms, the WHL loan figure is a universal pricing signal. If a building materials or fuel supply company claimed that 'we can't sell Gib or diesel for less than $x because that's wot the Gubmint will give us for them poor people' then ComCom would jump on them quick smart, alleging non-competitive behaviour. They would be expected to provide volume discounts, show that they did not collude or price-fix, and generally act competitively. Yet, strangely, in Housing, you'd have to have rocks in your head not to quote a new build for house+plot at $650K plus, in Awkland.

It is not, of course, as clean-cut as it seems: I've simplified and exaggerated for effect, But the price-floor aspect of WHL is, IMHO, a baleful market distortion. I'd be Interested in other common taters views on this....

Everyone agrees that first home buyers are locked out - regardless of what statistics the Minister quotes.

But affordability's not just an issue for first home buyers - it's every home buyer's issue. Home owners are increasingly priced out of the next rung on the ladder, despite the capital gains on their existing property.

Is Labour offering anything different ?

Winston though not wrong, goes to extreme but Labour is right and can vote them only for this one policy :

The elephant in the room which most people seem to be ignoring here is the massive number of immigrants being allowed to flood into this country. The Government actively encourages it.
Nearly all our problems, such as housing, roading, hospitals etc can all be attributed to this immigration , the likes of which we have never seen before.
The only party that has a genuine policy to put the brakes on is NZ First. I do not like them but they are the best of a very bad bunch!