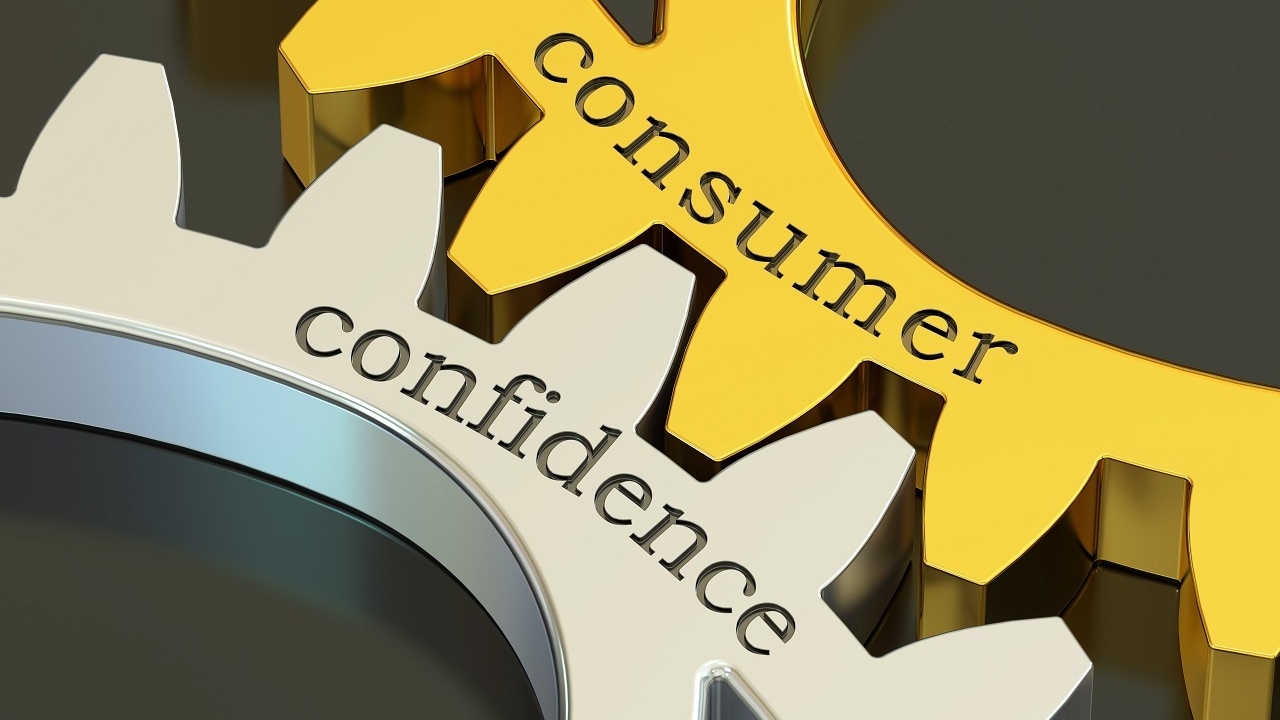 Consumer confidence improved a little this month but remains very low, according to the ANZ-Roy Morgan Consumer Confidence Index.

The survey has consumer confidence lifting 1.4 points in July to 81.9, still very low, as ANZ Chief Economist Sharon Zollner puts it. That's up from a record low of 77.9 in March this year.

Notably the survey shows inflation expectations dropping from 5.6% to 4.9%, the lowest rate in a year.

"That’s a win, as it shows monetary tightening is gaining traction," Zollner says.

However, the proportion of people who believe it's a good time to buy a major household item, a key indicator for retail spending, fell 4.4 points to -25, unwinding half June’s bounce.

"The ANZ-Roy Morgan Consumer Confidence Index was basically flat in July at very subdued levels. Households are understandably worried, with strong inflation eating into budgets, interest rates higher, house prices falling, and uncertainty ongoing. But in aggregate we haven’t seen a big pull-back in spending, which likely reflects the fact that there are job vacancies everywhere you look, and wages are rising," says Zollner.

There's further detail from the survey below:

♦  A net 2% expect to be worse off this time next year, pretty steady.

♦  A net 25% of households think it’s a bad time to buy a major household item. This is extremely low, and a worry for retailers. But with the labour market so tight and weekly spending holding up, it’s not clear that a sharp slowdown is imminent.

♦  Perceptions regarding the next year’s economic outlook improved slightly from -47% to -43%.The five-year-ahead measure remained at -5%.

♦  CPI inflation expectations fell 0.7% pts to 4.9%. Weak global consumer confidence is a global phenomenon. It’s hard to overstate how much people hate inflation. The rapid rise in interest rates won’t have helped either. A split of the results by whether the respondents have mortgage debt or not shows that those with debt are, unsurprisingly, more worried about their current and future personal financial situations, and whether it was a good time to buy a major household item. They are also more pessimistic regarding the economic outlook.

So far, despite low confidence, spending has been holding up, presumably because with the labour market so tight, job security could hardly be better. Being worried your income isn’t going as far is very different from worrying that your income might be about to stop. The precautionary saving motive doesn’t yet seem to have been triggered. Anecdotes about consumers trimming the sails and ‘trading down’ to some extent are common, as necessities take up a bigger chunk of income, but in aggregate at least, consumers are hardly cutting up the credit cards.

However, the question is not whether consumption growth will slow. The question is how much damage the Reserve Bank is going to have to do to the housing market and labour market to ensure that it does slow–and meaningfully, as that is the means by which strong domestic inflation can be conquered. On the inflation front, the RBNZ will be pleased to see the large decline in consumer inflation expectations to the lowest level in a year. Consumers don’t get to set prices, of course, but with a super-tight labour market their inflation expectations could well feed into wage demands –and wage outcomes. 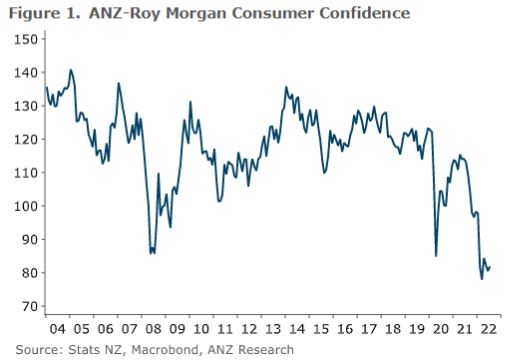 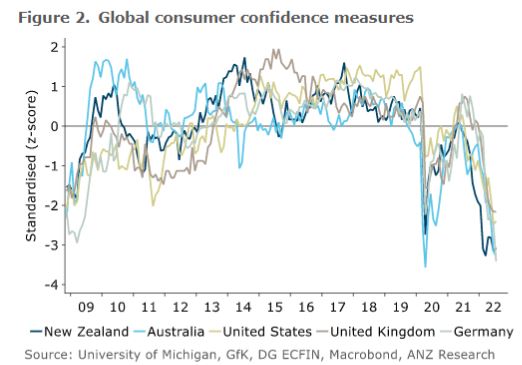 I think its starting to show interest rates are about to peak I suspect. Probably only another 50-75 basis max in rate rises left with the Fed and RBNZ.

December through to mid-2023 will be interesting, all those rolling over home loans, if any further rate hikes occur in late 2023 then probably won't see a recovery/plateau here until maybe 2025?

Will be quiet interesting right, consumer confidence going forward will surely be tied to retail lending rates, and the effects being lagging to the hikes by about 6-12 months, it makes you wonder when/what will cause the RB to stay the course, hold fire, or start dropping rates again.

If inflation expectations normalize further, maybe the OCR peak will not have to go higher than the 3.5% to 4% that current swaps are predicting. But this is still on open question, and upside risks to the OCR peak are still significant.

Stats are always a lagging indicator so confidence surveys have some updating of opinion which may translate into actions - short & medium term - the trend however is largely negative so a small unexpected shock/developments may have disproportionate effect. With approx 90.000 officially unemployed - 3.2% - and approx 180,000 on job seeker benefit what is the real unemployment rate 3.2%-9.6% or something in between and that ignores the underemployed. Could the current Evergrande debacle and the run on some smaller Banks in China - Henan province - be a potential trigger??

What happens when the 80% drop in new build sales flows through to overfull inventories and everyone out of work?

Behavior changes.  Work is just an activity to provide an outcome, fiscal spending is where the money for the economy is derived from.

We will have to find other things for builders to do, influenced by Government spending.  For example, now don't laugh at me, but Kiwibuild.  Maybe we could build some hospitals.  But trading existing houses amongst each other for higher sums and deriving "new build sales" from the gains of that does not work forever.

What happens? Unemployment surges higher, probably to circa 5% by May 2023

Which would be the end of wage inflation, probably at the same time as imported prices such as fuel and shipping drop too as well as international demand falling. Deflation is a real possibility, I think the higher the OCR goes, the more it will need to fall, possibly below 0 this time.

At some stage we will see peak inflation and then disinflation. What a lot of people don't seem to understand though is that even if inflation comes down a bit, it will still be higher than the 1 to 3% RBNZ target range for some time yet.

Yeah this is the point I think many are missing. The assumption is once inflation peaks central banks can immediately start dropping rates.

The realty is inflation is likely to remain well above target levels for far longer than many imagine.

If central banks start cutting rates while inflation is still outside the target band they risk repeating the mistakes of the 70’s and ultimately restarting the inflationary spiral.

I don’t make that assumption. It’s a bit more nuanced than that. And it’s due to the multi-pronged mandate the RBNZ have.

for me the big question is at what point do the RBNZ think unemployment is getting bad enough that trying to redress that - by cutting the OCR - outweighs the importance of trying to kill inflation.

I think you make a good point that it’s down to what the RBNZ think is the right balance. And based on their decision making to date it’s anyones guess what they will do.

A guess may be better than RBNZ history of wrong decisions.

The RBNZ would like to see unemployment rise off its current level anyway so I don’t think a rise will make them start dropping rates for a start. What’s their “sustainable” unemployment level that they desire? 4.5%?

What caused inflation, printing money this will take a lot longer for FED to resolve. The USD could lose its reserve currency status if it pulls back to low rates, bond markets will not let this happen. If US default on its debt the dollar will be worthless this would why central bank are buying gold . I think some people are being fooled about rates going down just the same as the transitory lie.

This survey can’t be believed if people honestly think there is still positive house price growth.