Housing costs are continuing to outpace income growth in New Zealand with close to 22% of householders now paying 30% or more of their earnings to put a roof over their head and renters most financially constrained, according to Statistics New Zealand's latest Household Economic Survey (HES).

Two years ago, when the last survey was done, an estimated 19.5% of householders were paying 30% or more for housing costs.

Statistics New Zealand said in its commentary the cost crunch was being felt most acutely by renters with housing costs (as a proportion of income) having leapt from 33.8% for the year ended 2009 to 39.1% for the year ending in 2011. Higher weekly rents are a major factor.

While average weekly expenditure on property rates has also shot up by 9.3%, homeowners haven't felt the same levels of pain. A drop in interest rates during that time saw average weekly mortgage payments drop from $376 to $369.

Total housing costs as a proportion of regular household income across both groups (renters and home owners) rose from 15.1% to 16% between 2009 to 2011.

Incomes over that time frame have been mostly flat. 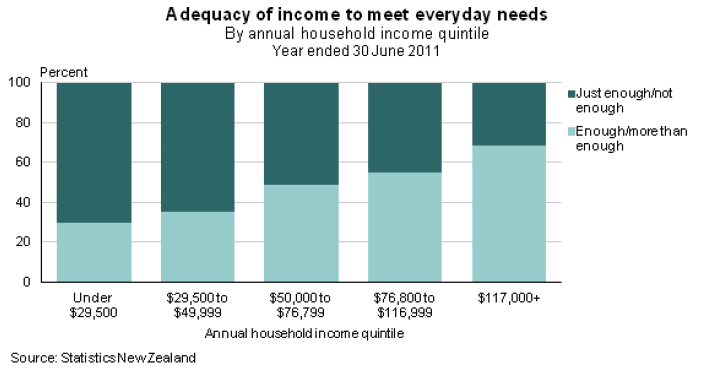 Uhoh - renting is getting expensive - who would have thought !

So how much extra landlord accomodation supplement is being paid over the past 2 years?  is there any correlation?

It probably depends what and where you're renting.

The rent for a nice 5 bedroom property outside of any exclusive city suburb is likely to be a lot less, especially if it's not in a city at all.

Not everyone lives in a city, and for those that don't, monthly rents are far less expensive than mortgages.

House insurance is going to continue to the squeeze here too.

I have to say I have my doubts about the data in these HES surveys. Stats NZ declare all "Income is gross (before tax) income." However, the main income events of the past few years has been the series of tax cuts, so while gross incomes have been growing modestly, take-home pay has been growing much faster for most households, especially the "Wages and salaries" components.

It is not credible to exclude the income tax cut impacts, while at the same time include the effect of the rise in GST on costs.

Another area I think is a bit dubious is the Auckland household incomes. Even at gross levels, I very much doubt there was a 7% fall from 2009 to 2010, and I doubt there was an 11% rise from 2010 to 2011. These sorts of moves over the whole Auckland region are very unlikely to have happened at such a scale. Sampling problems probably.

Similarly, there is no mention of the impacts of WfF on "household economic" situations. There are billions of dollars being transferred through these programs and they impact household incomes directly - yet they are not mentioned (or apparently accounted for) in this survey.

House prices crashing in Australia.  Expect our population loss to Australia to accelerate.

House prices would need to come back a lot in Aussy. While we had a peak in 2007, Aussy kept on going up and up for another 3 years, so any decrease now would have to be much greater than in NZ.  In reality, don't think people are going to Autralia because of the housing costs there

The loss is already accelerating; lower house prices will only increase the loss rate acceleration.  It's an inescapable consequence unless we can get ours to drop faster.

Don't agree. If house prices crash in aus, then the economy will tank, meaning there aren't the jobs for kiwis. Also if aus prices crash nz is likely to crash too

Correct and if they go in oz they are going down in Nz too, nah never happen.
Hey Steven , how's those ipcc email releases looking ?

The wonders of compounding.  Roll up: Mortgagebelt Credit card 4 u.

Here is the ultimate 'toy'....what every bloke wants...survive the collapse....

This baby opens up so many lifestyle options.....add a couple of pontoons with long range diesel tanks in them too...a full length cabin....solar power....the whole coast would open up for you and no mooring fees...no RUC or any other charges for that matter....

Thanks - can I order 2 Larc Vs.  Will fit in my survivalist bunker in the backyard along with my 3 years supply of tinned food & water.   Also the Larc V will be useful when Global Warming brings the Pacific lapping on my street.... also ferrying bankers and corporate types to safe island refuges from the angry masses ....    actually multiple uses really.