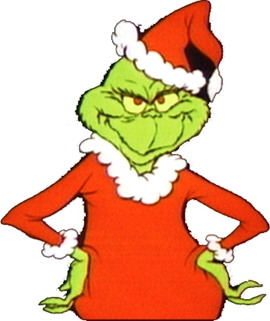 One of my all time favourite movies as a kid was the Grinch Who Stole Christmas.

I suppose it was a combination of things that made it special. When it aired on television it was a sure sign that St. Nic was on his way. Also, the animation was fabulous as were all the creative and whacky Dr. Seuss characters including the mean old Grinch. I suppose I also came to associate the movie with that time of year when the parental units were more accessible, the arrival of extended family (the normal tensions around which I was oblivious to) and the abundance of sugary treats.

My love for the show had nothing to do with the miserly nature of the gift scorning Grinch. Curiously, in mid-life I have developed an affinity for the green guy. It's not that I don't like giving or stealing gifts from small children. I guess it's just that Christmas has come to represent a gross form of excess and consumer madness that a lot of people feel pressured to participate in.

Yes, I know Christmas is a good time for retailers and many of them depend on this seasonal insanity for their livelihood. I don't begrudge them a living.  What I find more unpalatable and disillusioning is the expectation of a buy-in without any real consideration of the consequences, particularly for those who genuinely can't afford it.

My Grinchiness was called out last night at a dinner party when a friend produced some materials they'd received in the mail trying to capitalise on the Christmas guilt giving. The offensive item was a $2,500 pre-approved loan from an outfit called Finance Now, which is owned by SBS Bank, and came complete with sticky gift labels for the lucky recipients of the credit induced shopping splurge. It made me cross as well as inspired for today's Take Five.

Here's five reasons why I think we should boycott Christmas this year, with the exception of pressies for the little peeps. My heart remains full size still.

While I acknowledge that a lot of folks, especially those visiting our website, aren't easy prey for financial vampires selling cheap credit, for every one of you there's probably at least three others who are carrying high interest debt on credit cards and for whom Christmas poses a major financial liability. As of Oct.31, 2012, New Zealanders were carrying NZ$5.5 billion in credit card debt. (Check our our chart here).

Christmas long ago lost any real meaning in the secularised West. To my cynical mind, it's all about the shopping.  More of us abstaining from the madness will give others who can't afford it the mental permission to bow out and find other less materialistic ways to express their care and celebrate their love.

I don't own a lot. In fact my life's possessions are now contained within a two bedroom dollhouse size house with no storage cupboards. Sometimes I wish for more cupboard space but I suspect I'd just fill them up with more junk over time that is underutilised. My basic needs are met which is a lot more than I can say for many people. Perhaps it's time we redistribute our wealth to those who really need it.

Apart from not having any room to store more consumer goods,  there is something inherently wrong, in my humble opinion, with this vicious cycle of pressure fuelled buying that fills our cupboards but leave our wants unfulfilled. No amount of stuff is ever going to fill the void that underlies so much of the unnecessary consumption that takes place. Why not recycle more of what we already have and give Mother Nature a break.

Would it really be so Grinchy to divert some of that planned Xmas money splurge toward paying off debt (for those carrying it) or else banking it in a savings account to stock up the rainy day account or the retirement fund? It doesn't have to be an all or nothing kind of affair.  A slight pull back in the spending and a redirection in the saving could help to balance the scales and maybe force us to put more conscious thought and action into designing a Christmas that is more merry than hairy - and far less expensive.

And contemplation of Christ's Mass would be a good thing too.

almost tempted to bite at this one to kick off a "discussion" about the pointlessness of religion, religious traditions, or the fact that Jesus wasn't even born on December 25th, but it's a nice day today and I'm feeling very sanguine so I'll let it slide and even go so far as saying that it should be time to celebrate family and the wonderful life we live in Australasia, especially as we don't celebrate thanksgiving.

A friend of mine had a rocking idea - celebrate Xmas full-on, once every 4 years. Every 4th year no matter where you are in the world you have to make it back to the traditional family Xmas location and go ballistic with presents and tacky jumpers and the whole shebang. No exceptions. The other 3 years you basically just maybe send a card, possibly have a lunch or BBQ with any family members nearby, but otherwise don't bother.

That is the gist of Christmas, or should be anyway! Although it is doubtfull Jesus was born on that date, it is his birth we celebrate. Three Wise Kings appeared in Jerusalem after his birth bringing gifts, they arrived guided by a bright star high on the heavens, or so the story goes. I believe merchants worldwide have expanded on the story of the Three Wise Kings in order to prop up sales prior to the end the year. I believe Coca Cola Corporation develop the red and white suit in their advertisement campaign, and the sled and raindeer came from Saint Nicholas custom of fabricating gifts and regaling the poor children at X-mas.

Actually the purpose of the three wise men was to locate Jesus so the Herod could have this competitor to his throne slaughtered, they were warned prophetically not to advise Herod. Jesus was clearly born in the Spring and there is no record of his birth date in the bible. The Emperor Constantine, after his conversion to Christianity, merged the pagan worship of the sun god with that of the birth of Jesus in an effort to make Christianity more successful. Thus the celebration of Christmas is a pagan, and thus satanic, celebration. But don't let the truth get in the way of a good story.

I buy a little something (in a sale) every so often (for a very minor capital outlay) throughout the year and that's Christmas all sorted.  The kids and I go to the beach, collect bits and pieces and make mobiles and jewellery to give to people.  We all spend time together and have a bit of fun in the process.  My advice is to ditch the guilt completely, kid's love whatever they get - irrespective of the cost and actually really enjoy giving what they have made themselves to others.  They will in turn grow up with a good grasp on what Christmas is all about and won't be easily enticed into buying pieces of meaningless tat on credit!  I've noticed people rushing out and buying hams as the media have said "there is possibly going to be a shortage this year"  -  madness I say!  Seriously is Christmas not going to be the same if you don't have a 10 kilo ham on the table? -If you have the money to buy something like that - why not get some sliced ham for $2.99 a packet and give some money to others less fortunate than yourselves.  Shame on Finance Now too!

My advice is to ditch the guilt completely

why not get some sliced ham for $2.99 a packet and give some money to others less fortunate than yourselves. Shame on Finance Now too!

A little bit of hypocrisy in your Xmas hamper this year Weka?

No hypocrisy Stan, just a dose of realism...

I don't get this, if everyone stop buying those useless gifts, China won't be able to sell their stuffs and its economy will suffer and when China going down, well you get the drift...

So you have to spend money to make money..

I've always liked the grinch and felt a bit awkward not liking X-mas. Everyone liked it, or at least appeared to like it! I especially disliked the rush to spend X-mas somewhere, with someone who expected to see me on X-mas. I also disliked receiving gifts I had no use for, or even liked. As a matter of fact, that same picture of the grinch is my profile photo in a popular website which I visit very little.

It makes me happy to be in such good company on my appreciation of a very misunderstood and foretelling character, whose followers I am certain will grow in numbers after reading this post.

Grinches unite. Thanks HGW. Maybe we should start a Grinch page on FB?

We'll call it The Grinches' Club, and soon we'll have followers. I know others who feel the same way, but they choose not to stand out..Grinches Unite!

Bang on Amanda...these Pagan festivals are a pain...little wonder the coppers call it the killing season.

Lol. Good on you Wolly, always reliable for a dose of reality.

A why-wait-til-payday  loan company's ad popped up on my facebook page today with Christmas trimmings and festive joy.   I can borrow $750 NOW!   Great!

No mate your house is way too small to house a fine piece of electronics like that, you need a bigger house.